Robert Morrissey was Minister of Economic Development in the Catherine Callbeck government in the early 1990s when I began work on the first website of the provincial government. As such, he was the first person I came to know as “the Minister,” and it takes every fibre of my being to call him Robert, let alone calling him “Bobby,” which is what he prefers, and what everybody else calls him.

In last year’s federal election, Robert (er, Bobby) was elected Member of Parliament for Egmont, the district on the western end of Prince Edward Island, and it was in this capacity that, through an intermediary, he reached out to me earlier this year to ask if I could help to facilitate a town hall on rural Internet access he was planning to host for his constituents. He needed someone impartial – which is to say, someone not in the Internet business themselves – to explain the basics of Internet access to those attending, and to sketch out what’s available on the ground right now, how much it costs, and, in the end, why it’s more expensive and slower than what we in urban PEI have access to.

I’m no Internet-access expert, but I know my way around the terminology, I’ve suffered from poor rural Internet myself (when I first crafted www.gov.pe.ca, it was on the end of a 14.4 Kbps modem connection), and I have some facility in explaining complicated things, so I agreed, and after some schedule juggling, this past Friday, September 23 was set as the date, and the St. Louis Community Centre, deep in the heart of West Prince, was set as the location.

St. Louis, in PEI terms, is a long drive from Charlottetown (the first time I had a meeting planning for the area, back in 1993, my coworkers were surprised to hear I wasn’t staying overnight). But it’s really not that far – 2 hours from door to door – and so I set off around 4:00 p.m. on Friday afternoon for a planned 6:00 p.m. arrival and setup and a 7:00 p.m. meeting.

The going was slow at first: torrential rain caused traffic in Charlottetown to grind to molasses, and by 4:45 p.m. I was still inside the Charlottetown city limits. But things picked up from there, and the farther I drove west the sunnier it became; by the time I got to St. Louis it was brilliant out: 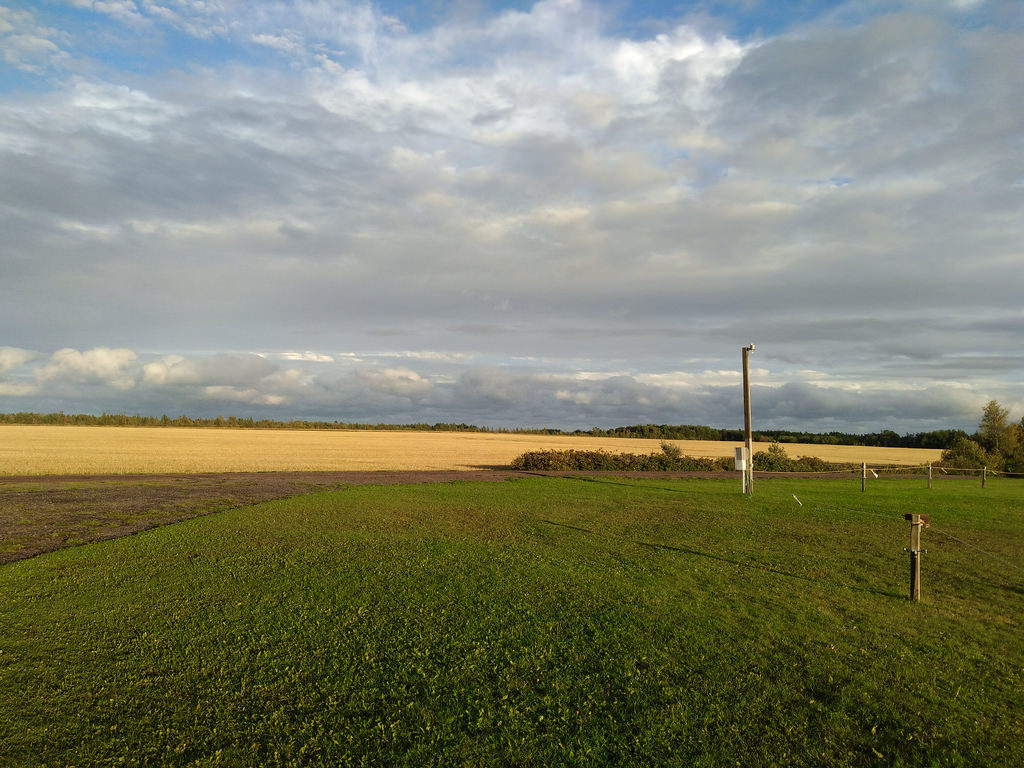 I’d prepared a Keynote presentation earlier in the day, assembling all the research I’d gathered from talking to Internet service providers and scouring their websites, and Bobby’s staff had a screen projector set up at the front of the hall when I arrived, so it was quick to set up: 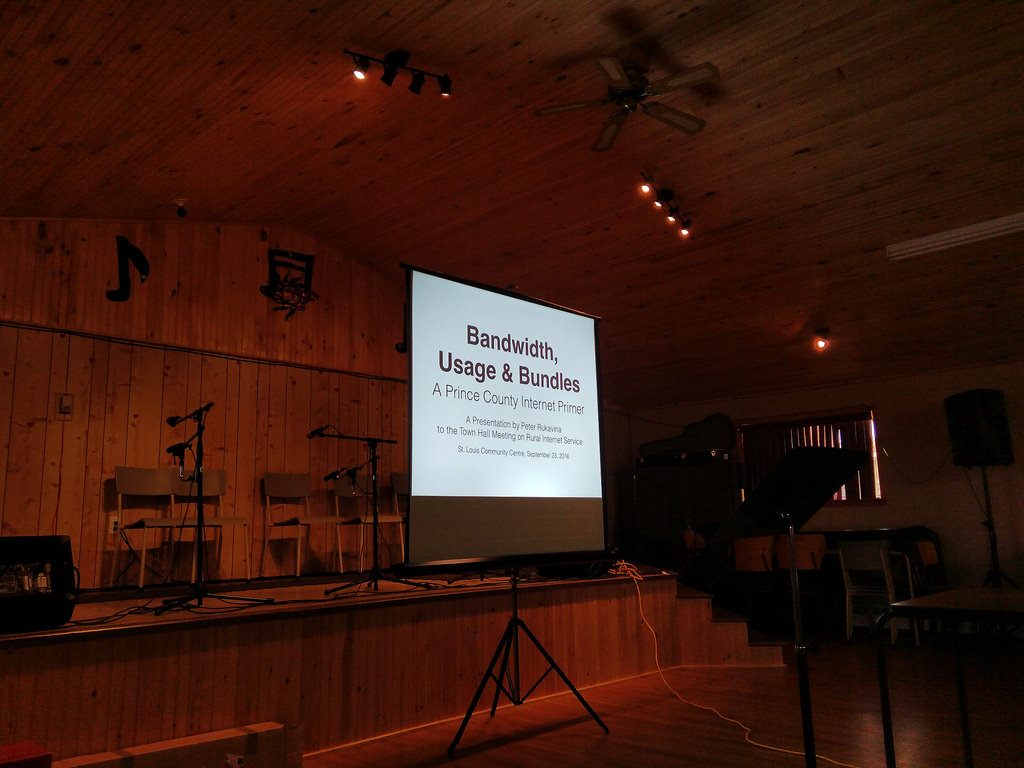 The plan was that Bobby would introduce me, and then I would speak for 15 or 20 minutes, and then he would take over and lead a discussion. By 7:00 p.m. there were about a dozen people in the hall (a hall, by the way, that is the envy of any community hall on PEI and has perhaps the most comfortable chairs of any hall I’ve ever been in). Bobby made a short introduction, and then I started in with my presentation. 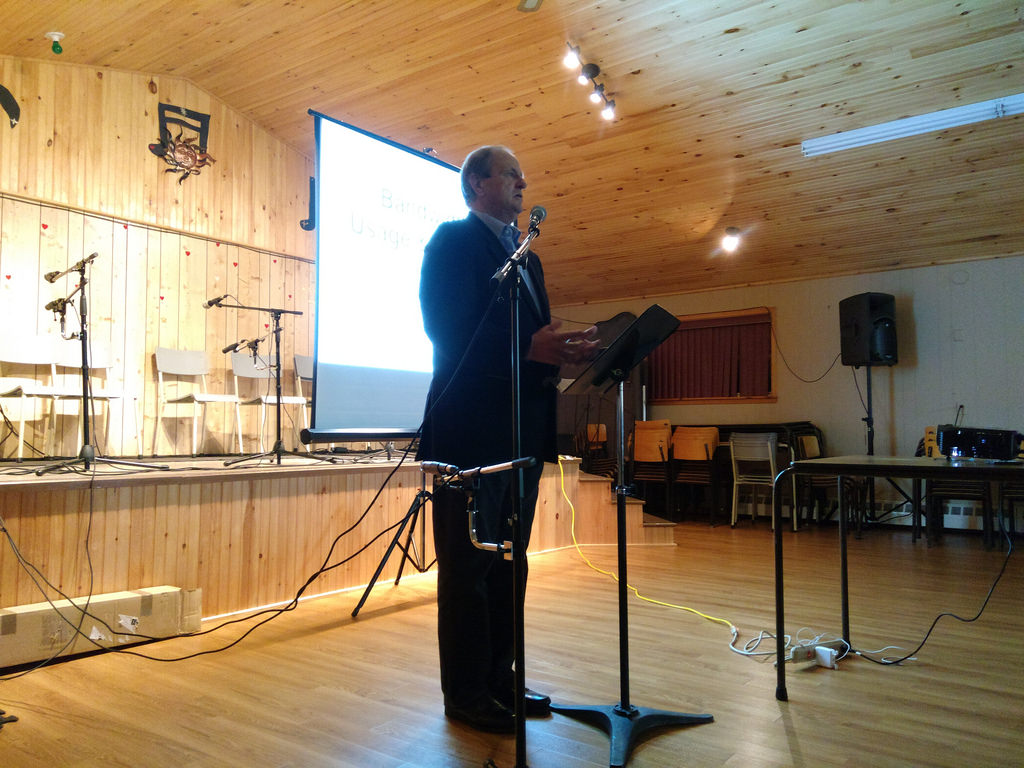 The goal of my presentation was to define the terminology people will encounter on Internet provider websites and phone calls (“bandwidth,” “usage,” “megs”), to talk about the ways of delivering Internet (fibre, DSL, cable, wireless) and then to review what companies are providing Internet in the riding, what they charge, and what they offer. I used the St. Louis Community Centre itself as a test address, and showed how the fastest Internet available at that address was 10 Mbps down and 1 Mbps up from Xplornet, and how that was 1/10th of what I could get in my office in Charlottetown while paying not that much more.

My plan to speak for 20 minutes and then to cede the podium to Bobby went off the rails when those present asked a lot of very, very good questions that I tried to answer completely. We talked about things like whether fibre to the home would ever extend to rural areas (unlikely), and about what the various wireless options are, and how they might be the quickest way to more bandwidth. We talked about the ins and outs of the Province attempting to lever its way to rural Internet in 2008, and how this worked and didn’t work both. Perhaps the wisest comment came from a constituent who reasoned that if I was paying $1 per Mbps of bandwidth in Charlottetown, he should be paying $2 a month for the 2 meg DSL service he’s getting at his house. I found it hard to argue with his logic.

The constituents who attended were wise, full of valuable insights, and made a clear case to Bobby about how lack of affordable, reliable bandwidth was holding back both economic development and education in the district. Bobby, to his credit, agreed this was the case – he has to drive in to Summerside to get the kind of Internet he needs to do business as an MP – and he genuinely seemed willing to listen to the solutions proposed, and to advocate for them.

I finally sat down about 8:30 p.m., and Bobby took the floor to summarize things and to close the discussion. We didn’t leave the hall with a plan, but I hope that everyone left a little wiser, and with a sense that the only things standing between West Prince and bandwidth are money and the will.

I headed out into the clear, dark night at 9:00 p.m., stopped at my friend John Cousins’s house in Bloomfield for a cup of tea and a chat before heading back to town. I rolled into my driveway back in Charlottetown near 1:00 p.m., 9 hours after leaving, satisfied and exhausted.

(Here are the slides I presented).

Thank you for the presentation you embedded.

Those constituents seem to have a good advocate.

Hope their access to the net becomes more equitable.

thanks Peter, useful and interesting write-up. I see satellite internet is a pretty standard offer, and also used as back-up for other packages. Would satellite, due to signal lag (going to orbit and back), cause reliability issues e.g. with videoconferencing, or online gaming etc? Any experience?

And another question, you mention 'radio' as one of the ways of delivery. What are the frequencies used, and is that e.g. mesh networked, or more a line of sight connection to a near shared access to 'regular' nets?