One aspect of our shared childhood that my brothers and I all remember clearly is The Budget.

We were never completely sure what it meant, but we all remember our parents talking about it, and we remember that there were various systems in place that regulated it.

For example, if we needed $5 for fish and chips in the cafeteria on Friday, there was a pencil case on our father’s dresser that held petty cash that we could get the $5 from, but we had to note this on a chit, and the chits were collected and factored somehow into The Budget.

Our parents are both systems thinkers, and The Budget was an integral part of maintaining and organizing the economic fuel that allowed a family of 6 people to get by on a single salary.

In the mid-1980s we started to have computers in the house: first a TRS-80 Colour Computer, which my father brought home one day and upon which he (and I) spent many hours typing away (I sometimes think that 20% of my youth was taken up typing in program listings from Creative Computing and Byte).

Dad’s tour de force, programming wise, was the creation of a BASIC program to track The Budget. In the years since this has been replaced by off-the-shelf applications like Quicken, but at the time it was all hand-coded and thus custom-tailored around the economic ecosystem of our family.

Another aspect of our parents’ systems thinking is a predilection for archiving, and so that BASIC program, in its various versions, has survived in Dad’s digital collections all these years and the version from 1986 — BUD86.BAS — surfaced recently and he wondered whether it was possible to run it on a modern computer.

It turned out to be surprisingly easy.

PC-BASIC is a free cross-platform GW-BASIC emulator that’s available for the Mac. I downloaded and installed it, and once I realized that its “working directory” was my home directory on my Mac, I simply copied the BUD86.BAS code into that directory and:

at which point — somewhat magically given that 30 years had passed — this appeared on the screen:

Just looking at the menu can tell you a lot about the financial setup of our family the year that I turned 20: a MasterCard, a Visa, department store cards from Sears and Eatons, and a chequing account.

There’s no actual data there. And, it seems, no way of adding new transactions (I’ve asked Dad whether there was a separate program for that). But entering “4” for “CAT. TOTALS” you can gain some additional insight into the way that things got categorized: 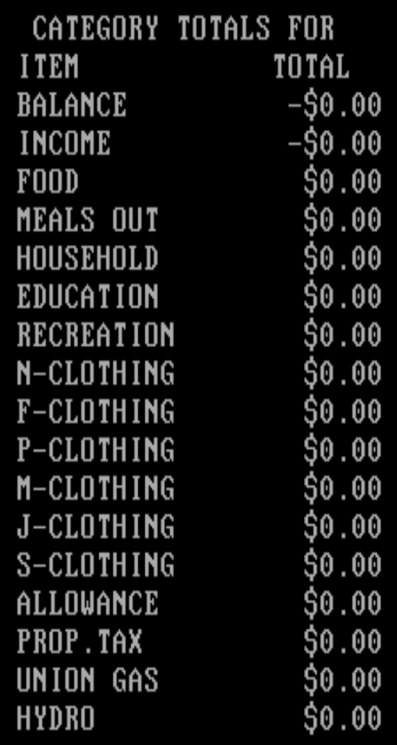 That there was a budget category for “Computer” is interesting in and of itself. Indeed, surely there’s much to be mined from this sort of information about the social and economic history of the late 20th century Canadian family; I hope other families have an archival bent and have saved their own particular budgeting schemes so that they can form the part of a broader analysis of this type of thing for anthropologists of the future.

Meanwhile, I’m sad to report that there are no aspects of the formal organization The Budget left in my Charlottetown branch of the family; perhaps because we’re a smaller crew, perhaps because we’re lazy, but our approach to budgeting has been, most of the time, “save what we can, spend the rest.”

Vestigially expressed from deep within me, however, is an economy of spending that I inherited from my parents (that, I imagine, they inherited from their parents, who lived through the Great Depression): I feel guilty every time I spend money, and if there’s a way of avoiding it, I’ll always take that way first.

It may not be the least stressful way to live, but it got my family through the 1970s and 1980s in one piece, so it can’t be all that bad.

I envy that you were able to use your computer skills to transcend what for me is like a Great Wall of China separating me from everything I ever did on a computer since the turn of the millennium.