Last week at the David MacDonald seminar, I mentioned to the assembled group that I spend my life responding to bug reports:

In the discussion that followed, I talked about how I spend my daily life, in essence, responding to bug reports.

I talked about how, when you spend enough time shining light in the dark recesses of a digital system, addressing its bugs and trying to add missing features, sometimes you reach a point where you realize that the digital system’s fundamental design is one substantially unsuited to the task for which it’s being used.

One of the things that became clear from the reaction to this characterization is that the notion of a “bug report,” while second nature to the digerati, isn’t something that regular everyday people necessarily understand. That’s a shame, as I believe it’s a useful notion, one that allows many problems to be solved quickly, efficiently and powerfully without recourse to blame or getting overwhelmed by scale. Nothing everything can be characterized as a bug, but many things can, especially with regards to small-scale human systems like cities.

I had a chance to take this idea out for a ride last week when I noticed that Holland College had started to demolish buildings immediately upon receipt of a building permit, without waiting for the 21 day appeal period, which ends on September 5, to arrive.

This seemed like a bug to me in the city’s operating system: an unanticipated confluence of conditions that resulted in an unrecoverable error.

And so I suggested to the CBC that it do a story on this, Steve Bruce got assigned the story, and it was published today online and will run tonight on Compass. 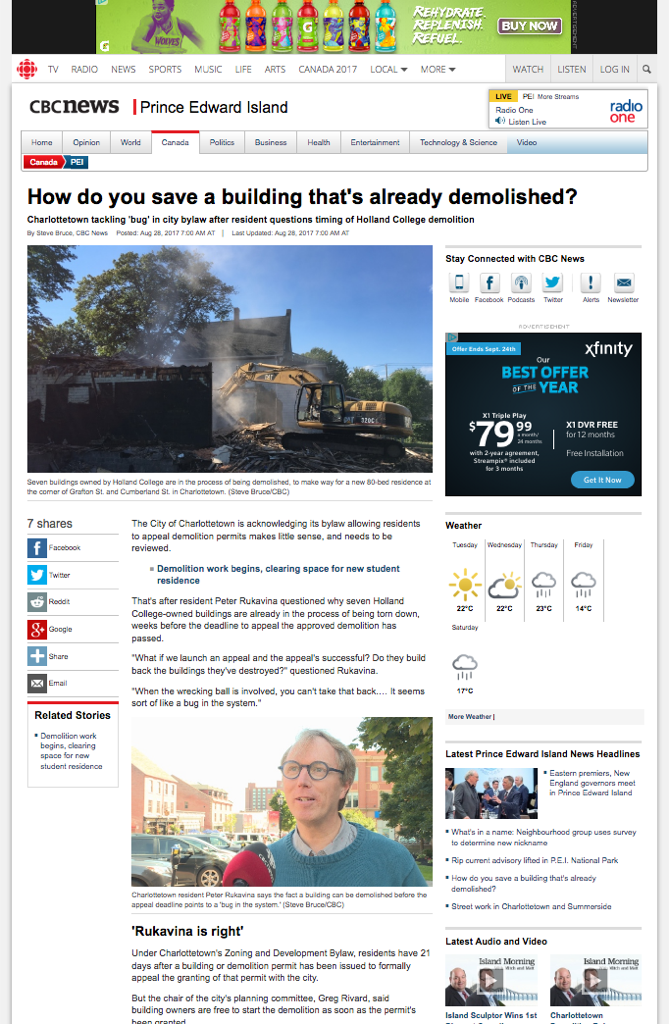 I was happy with Councillor Greg Rivard’s reaction to the suggestion that this was an issue that needed to be resolved.

And how often does one get to read Rukavina is right as a subhead!

And that’s the thing about bug reports, and while they’re useful: I didn’t blame anyone, I didn’t suggest that anyone had done anything wrong, or that anyone was corrupt, or that anything more than Holland College following the rules, as laid out, had happened. I simply pointed out a logical consistency in a bylaw, with the hopes that it would be corrected.

There are other bugs. One is that a municipality can issue any building permit anywhere without having to consult the Environment Department. It's how a lot of cottages are being built on top of sand dunes and wetlands on the eastern end of the island, which goes against the Environmental Protection Act, but is either unenforceable, or just unenforced.

We've tried to get the Department of the Environment (Department of Environment, Energy and Forestry)'s attention on it, but they have refused to act. Definitely a bug, not a feature.