Remember two years ago when Romanian software came to my rescue an enabled the production of the Official List of Electors for the 2003 Provincial General Election?

This week I went looking for a “IAX softphone” for my Mac. A “softphone” is a piece of software (hence the “soft”) that acts like a telephone (hence “phone”). While I’ve had good success using my Asterisk system with regular old hardware telephones, it’s possible to use a computer’s speakers and microphone to replace the handset of the telephone, and that’s what a softphone allows.

Until this week the only Mac softphone product I’d ever used was X-Lite, the freeware Mac version of a cross-platform product produced by Vancouver, BC-based Counterpath. X-Lite is a “SIP softphone,” which means it uses the widely-adopted SIP protocol to communicate with the Asterisk server. And X-Lite actually works. But it’s slow to load, has a non-standard, unwieldy interface (that suffers from the “trying to look just like a phone” problem common to many softphones), and it’s bear to configure. 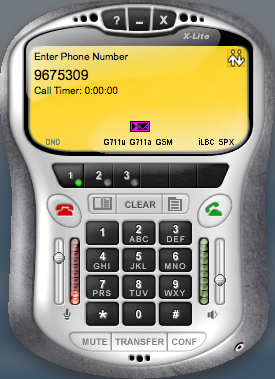 The Bucharest-based Modulo Consulting makes an IAX softphone for the Mac (IAX is simply a different voice-over-IP protocol, one that grew out of the Asterisk project itself) called LoudHush. It’s fast, extremely simply, worked right out of the box, and, at least in my experiments, has excellent voice quality when talking to my local Asterisk box. It needs a little more polish (but just a little), but it does everything I want it to do, and gets out of my way otherwise.

Romania is where it’s at, I tell you.