As a “pay as you go” customer of Rogers Wireless, using an unlocked T610 I bought on eBay (aka “a non-Rogers phone” in their parlance), I inhabit a murky nether-world where Rogers treats me as a full customer as regards billing, but as a sort of pseudo-customer as regards customer service.

Partly this is because their “pay as you go” offering is the bastard child of their mobile service — something that, from all appearances, they offer grudgingly and view as an entry-level drug for real “3 year contract” service. And partly it’s because I have a phone that they didn’t get to program, that they don’t sell, and therefore that they don’t support.

I know my T610 is a data-capable phone because I used it successfully to browse the web, send and receive email, and even as a wireless modem for my laptop while I was in France on the Orange network.

Rogers has a brief FAQ about WAP settings on their website, but it’s just generic enough that I could never get it to work. Tonight, however, I found this very helpful forum post that contains the same information but with helpful annotation. Worked like a dream, and I can now press the mysterious silver button on the top right side of the phone and get the Google WAP-specific page loading up in the phone’s tiny browser window.

I followed the instructions on the same page to set up “MMS” (multi-media messaging?), which my T610 calls “Picture Messaging.”

Next, I wanted to know how much all this would cost me (there’s no information about data rates on Rogers rates page). So I visited the front page of Google (but didn’t search for anything) and then I send a picture to myself using “Picture Messaging.” Here’s what appeared a few minutes later in my Rogers transaction history (read up from the bottom):

The first charge is a mysterious $2.00 charge that was refunded a minute later (later experimenting suggests Rogers does this every time you use the data features of the phone). This was followed by a 2 cent charge, which I assume is associated with loading up the Google front page. I also assume that the 50 cent “Data Usage Charge” is what it cost me to email a photo to myself (that seems to be confirmed here).

The “picture messaging” (MMS), which Rogers brands as My Pix but my phone, perhaps because of its complicated provenance, calls “t-zones,” is a freaky proprietary-seeming system that sticks a Rogers branding wrap around the photo, and then emails it. Here’s what the photo I emailed myself looked like when it arrived: 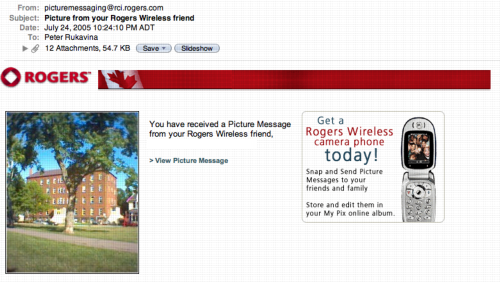 Much to my surprise, Flickr’s send photos from your phone system was smart enough to rip out all the Rogers crap and grab and post my photo, which is neat (that one cost me another 50 cents, of course). Fortunately, my phone has Bluetooth built in, so I don’t need to MMS myself all my photos!

The grim reality of all this is that now that my access is enabled, I’m still faced with the prospect of browsing the web with a tiny screen and numeric keyboard for data entry, but I imagine there will be times when even this little window to the net will be helpful in a pinch.

Rogers is a major communications company in Canada. Because there are so few the act as part of an oligopoly and generally charge much more — and deliver less — than can be had elsewhere in the world. In Canada we simply have to live with it.

Hi
I have a question. I have had Rogers Paygo service for some years now and recently picked up a smart phone. I did a Sim swap as I’ve done in the past and added browser on phone service. When you added your phone service did you update the IMEI on service to enable smart phone recognition or just update the SIM? I even used a UICC SIM from a HSDPA SIM assuming that it would make a difference, but still no connection to MMS or WAP GPRS

I’ve regularly swapped my Pay As You Go SIM from Rogers into different phones, and have never alerted Rogers to this fact. Indeed I don’t believe I ever gave them the IMEI of my phone in the first place.