The Charlottetown Transit system up and down University Avenue now runs every 30 minutes, which is often enough to graduate at least that route into “regular world” status: it’s often enough that you don’t need to make special plans to sync with the bus, as one will always be along in a reasonable amount of time.

I took the bus up to UPEI this morning for an Access 2009 planning meeting and got the rare opportunity to ride one of the special hydrogen-powered buses that are more often used in a back-up or special-purpose role: 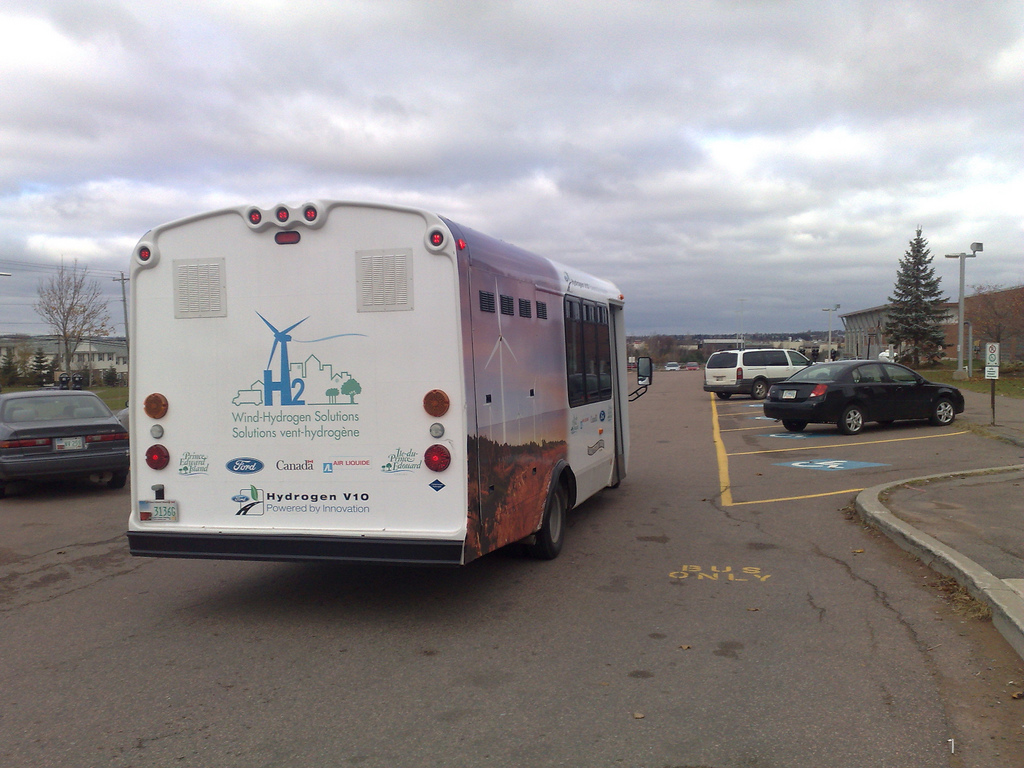 The hydrogen buses are a pilot project of the Governments of Canada and Prince Edward Island, along with Ford and Air Liquide, and they were announced a year ago this month.

While I can’t say anything bad about the ride itself — it seemed like a regular everyday bus ride in all respects — that this is a prototype that’s not ready for prime time was clear from the fact that the buses only hold 12 passengers: in the photo above the part of the bus with windows holds people; the large section at the back of the bus holds whatever hydrogen-powered magic that makes the buses go.

Unfortunately the hydrogen that powers the buses is being trucked in from off-Island, something that presumably reduces the clean ride aspect of the project; the plan is that eventually something like the Wind-Hydrogen Village project might generate the hydrogen, but this hasn’t happened yet.

You’re crediting these old-fangled, internal combustion-powered engines too much in providing them the cover of “hydrogen powered magic.” They’re no more hi-tech than vw buses running on used cooking oil—which would send a more productive message too. There’s no hydrogen economy without a replacement for internal combustion. We’re waiting on efficient fuel cells and the research it will take to invent them, not just for marketing. Also especially, as you say, we’re waiting on a clean source for the hydrogen—involving a starting material and a conversion process which won’t pollute as much as the tail pipe emissions we’d eliminate using hydrogen in cars and buses. It’s not the trucking from off-island I’d worry about undermining the clean-ride claim. It’s that it’s liable to have been made by releasing all the carbon from coal or gas into the atmosphere. Well, I suppose CO2 counts as “clean.” They have us there.

Oh…incidentally, what’s hogging the space in the bus is not so much the engine but the fuel tank, or however they’re carrying the hydrogen around. Imagine solo backpacking with only rice crispies for food. Not much room for gear once you’ve packed your food.