At my core I am a logistics man: I am fascinated with the movements and interactions of data and people and the world. It’s why I love maps hacking and plumbing geopresence. It’s why I’ve been happily coming to terms with the sun and the moon and the stars for the past two weeks as I develop a new custom publishing engine. It’s one of the reasons I love the traveling part of travel and the mechanics of the transport that makes it happen.

And it’s why, when Charlottetown got a public transit system back in the fall of 2005, I decided to lend a pro bono hand and created a map to make it easier to navigate. Although the transit company took an interest in my efforts (going as far as to plaster the thebus.ca URL all over their promotional materials), it was and has continued to be a skunkworks effort happily free from bureaucracy or responsibility.

Which is to say that, setting aside the “public transit is good for the world” part of my rationale, my map dabbling was fired by an interest in getting my hands dirty with intersections and stops and schedules and map APIs.

As the transit system evolved, I continued to evolve the map, in part spurred on by the increasing elegance of the four interconnected transit routes that covered the city like a huge figure 8, meeting downtown, at the Atlantic Superstore and at the Charlottetown Mall.

In May of this year that elegant system was thrown out, replaced with what, frankly, was an incomprehensible rabbit warren of a schedule. “Routes” were replaced by “Services” and “Loops.” The figure 8 was jettisoned. Buses that used to leave “every hour on the hour” now left at seemingly random times. And the brand new 6-page full colour schedule was, in short, simply impossible for any sane person to understand.

While I’m certain there was an internal logic to the completely renovated system, and that it no doubt addressed many specific “John needs to get from X to Y at 8:32 a.m.” concerns from riders, taken as a whole the system sank from elegance and simplicity into a chaos.

Setting aside the practical ramifications of the move — like the fact that my friend Dan simply gave up on the system altogether after being one of its more dedicated advocates — I was simply aghast on a purely artistic level.

And so while I may have been able to sit down for a week and try to figure out how to translate the new schedule into something that I could represent on a map, I too simply gave up.

At least for a while.

It’s taken me three months to forgive the logistics assault on the universe: tonight I sat down and started to breath some life back into the Charlottetown Interactive Transit Map.

I’m starting slowly: so far only one of the “routes” (or is it a “loop” or a “service” — not sure), the “University Avenue Express,” is represented. It’s the least confusing run, and easiest to rekindle on the map (it’s actually quite convenient if you live downtown and want to go to the movies, as it now runs until 10:00 p.m.).

While I was at it, I made some upgrades to the way the map itself operates.

As before, you can click on any “stop marker” to get a pop-up information window about the times that the bus stops there: 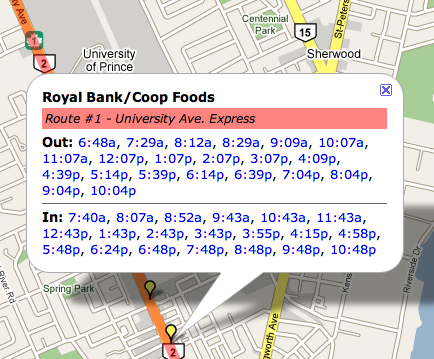 But now every time in the pop-up window is a clickable link to the stops on that “run”: 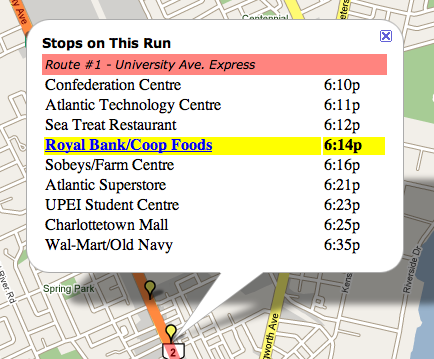 This solves one of the limitations of the previous code, which was that although it was easy to see when the bus was leaving your stop, it was almost impossible to figure out when it was going to arrive at your destination. Now it’s easy.

In the days and weeks to come I’ll see if I can’t make sense of the remaining routes / loops / services and translate the rest of the system into this new home (of course I could also suffer another bout of being aghast and just throw my arms up in the air again too).

Do you know about the CGI Building schedule? I saw a bus heading in there at 8:10 this morning. I am trying to get downtown for 8:30 am… that would help in the line of NOT PAYING FOR PARKING. I just don’t know when I would be able to get home either…
HELP!

I think you should take more credit for your innovation.

CBC is reporting that Fredericton is the first to offer transit bus routes incorporated into Google Maps.

I know there haven’t been very many comments on your innovation with the bus routes, I really like the fact you have the Google maps version, often I’m tearing out my hair attempting to use the large piece of paper to know when the next bus is coming. On the rare times I’m without a watch it is practically imposable to know when the next buses come. I like the map so far and I hape that they will give you more credit, anyways, I certainly think the transit can be improved, but since bad transit is better than no transit I’ll keep my mouth shut for now.

Anyways, good work on your map and I hope to see updates soon enough.