Oliver and Catherine and I drove out to the north shore on Saturday, taking advantage of the wonderful weather, for some holiday-weekend diversions. We had supper at the revitalized Ship to Shore in Darnley, and then doubled back to Sea View Hall for the “Jamboree” advertised out front on a sandwich board.

Truth be told I had no idea what a “jamboree” was. And so my first question on entering the hall was “I have no idea what a jamboree is,” to which the kindly ticket-taker simply replied “music.” So we bought our tickets — $5.00 each, free for Oliver — and joined a crowd of about 50 packed into the hall and waited to see what that meant in practice.

While you might expect Oliver to be the youngest person at such an event, we were somewhat surprised to find the Catherine and I were likely the next-youngest: the crowed skewed older and, while they were welcoming, we did feel somewhat like fish out of water.

At 8:00 p.m. the master of ceremonies took the stage and the proceedings began. 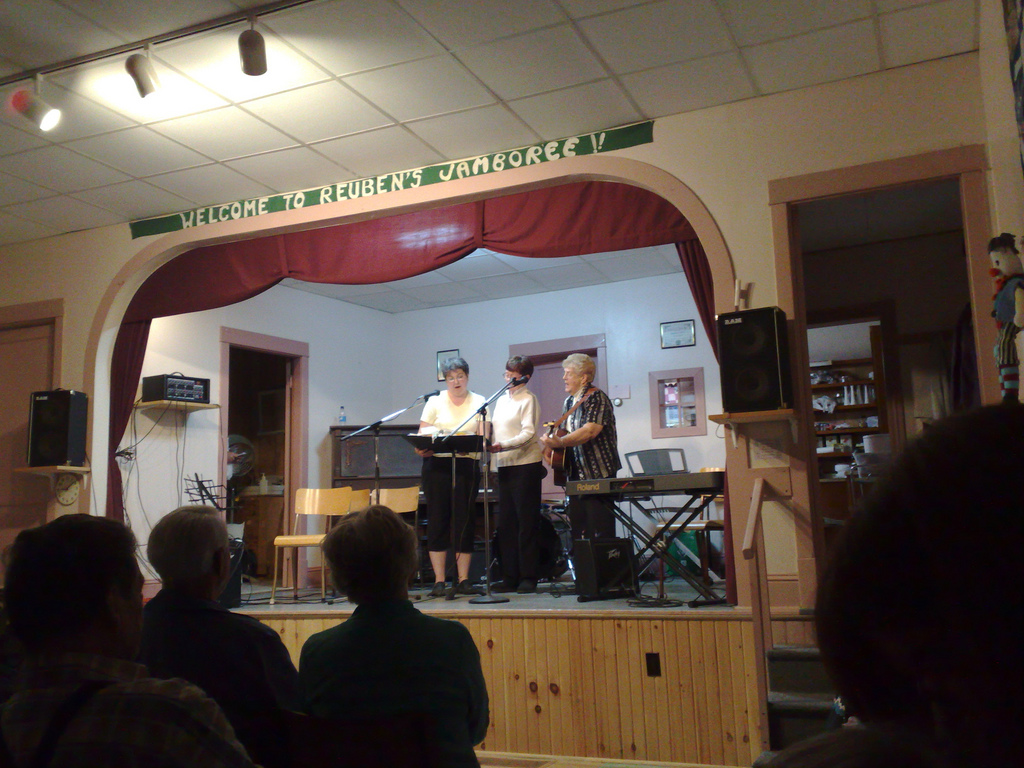 So here’s what a jamboree is: people with instruments show up, put their name on a list, and get to play two songs. As near as I could tell they’ll take anyone, playing in any musical style, and will keep going until everyone’s had their chance.

I’d say it was an “open mic night,” but it’s clear that these are not aspiring professional musicians, just regular everyday people with a song in their heart. They mostly played country songs, sometimes ones with a strong religious line running through them. They played guitars, mandolins, piano, drums and fiddle. Or just sang. And they did so with conviction.

The line between “audience” and “performer” wasn’t really all that clear: Catherine was talking to a nice older woman — the kind of person that could have been your mother or your grandmother — when suddenly she was called up on stage to play guitar.

In the hipster intelligentsia there’s a lot of talk about “maker culture” and about how everything’s gone all “participatory” of late. As if we needed digital tools to allow we amateurs to make and distribute stuff. A night in the audience at Reuben’s Jamboree reminded me that this isn’t a new invention at all, and that regular everyday people have been making their own culture for as long as there have been regular everyday people.

Reuben’s Jamboree takes place on the third Saturday of every month at 8:00 p.m. at the Sea View Hall (about an hour’s drive northwest of Charlottetown). If you show up with a guitar or mandolin I’m sure they’ll welcome you up to the stage; if you’re content to sit in the audience admission is $5.00 for adults and free for kids, which includes a lunch half-way through.

Night lunch is my favourite meal of the day.

If you could say that in less than 100 words, it would be One Great Thing.

There are quite a few country ceilidhs that operate in a similar fashion like the Wednesday night one at the Eastern Kings Rec Centre, Munn’s Road which serves about the best biscuits and strawberry jam!

We participated in the Jamboree in 2019 and we are visiting in Sea View. Looks like if this event is still occuring, we missed it.