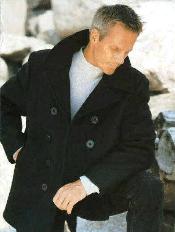 The middle of December heralds the return of the Well-dressed Men to Charlottetown.


There are only four resident Well-dressed Men in our city year-round: Darren Peters, Ritchie Simpson, Robert Ghiz and Brian Cudmore.


The rest of us dress like either Peter Gzowski, Red Green or Kurt Cobain. Or some combination of the three.


But each December two groups of additional men migrate to our city: the Returning Successful Men, and the Well-dressed Spouses.


Because these migrants arrive from the Big City, where fashion is king and the dollars flow freely, they dress themselves in the kind of clothes the likes of which you just don’t see on the streets of town the rest of the year.


The Well-dressed Spouses, which is to say those men from away lucky enough to have married a native Islander, tend to carry their couture slightly differently: for them it’s not nouveau fashion, it’s the way they’ve always dressed. So they’re more confident, more self-contained. They look less like fish out of water than like fish for whom water isn’t technically required.


If you are having difficulty spotting the Well-dressed Men as you walk about the downtown doing your Christmas shopping, here are some guidelines:

While you might take my tone to be mocking, rest easy in the notion that, as a perennially poorly-dressed resident of Charlottetown, it’s more avarice than spite that I seeth with when I see these well turned out visitors on our streets.


And then I sooth myself with this notion: when one is forced to assemble a wardrobe from the men’s departments at Mark’s Work Wearhouse, Zellers and Wal-Mart, just how high is it appropriate to set the bar?

First, you say that “[t]he rest of us dress like either Peter Gzowski, Red Green or Kurt Cobain. Or some combination of the three.” In addition to being hilarious, this is true. I feel equal parts Gzowski and Cobain.

Second, you are too humble. Ian Williams complimented your cardigan (and we’re quite sure he wasn’t being sarcastic).

Finally, that guy in the photo — he sucks.

Yes it’s the shoes that are the give away. In summer I wear the same pair of brown Clarkes — i think that Steve has a pair and wears them as often as I. In the winter a black pair of Clarkes. I have been trying to wear the same shirt for a week but am getting complaints from the dogs.

I have all thse suits and shoes from my past in my basement. I think I could wear the shoes again but the suits seem to have shrunk

I’ve said it before, and I’ll said it again… pin stripes people… pinstripes. Especially you ladies out there… get yourself a pair of pinstripe trousers.

Now Robert Ghiz.. for me it’s his eyebrows.. while he dresses well (and is damn cute *warning — secret crush* ), I want to know who is in charge of the upkeep of his eyebrows. They are the best set of eyebrows I have ever seen on a handsome young man. At least in his election champaign photos they looked awesome. A case of photoshop maybe??, Nah, just good eyebrows.

I’d like to add Mamdouh Elgharib (owner of Meeko’s restuarant, career councillor at UPEI, and altogether dapper man) to your list of consistently well-dressed men in our fair city. I don’t think I’ve ever witnessed him wearing the same tie twice and he may have the finest selection of shirts of any man in town.

Also of note for those seeking to increase their style. The Morning News has an incredibly entertaining and helpful Guide to Men’s Fashion. It’s straight-forward, achievable, and quite accurate as far as I can tell.

Thanx for your endorsement, your check will follow shortly.

I’m with Daniel. Not only should Mamdouh be added to the list, but I’ll add that if there were a boy fashion contest for Charlottetown, he’d win. He’s the real package, beautiful clothes, great personality and beauitful looks. I especially like his very high bum.

He also has the only man moo-moo in town and a wicked temper in a soccer game. Both invaluable assets.

I have the wool pea coat and I’ll be returning to Charlottetown from the big city of Halifax on Saturday…I’m not sure if I should be proud or ashamed…maybe I’ll wear it with jeans and a ball cap, confuse the hell out of everyone!

One should also not ignore the return of well-dressed women..

Alas my fashion rating skills do not extend to women.

You may have to break out the pleats

The ubiquitous owner of the aubergine jacket you so nicely fingered in one of your former fashion posts also owns and wears a pea jacket. And he has some extremely classy shoes.
However, he would recoil at the thought of being outed as a fashionista.

(though he really is)

And he lives here all year ‘round.

Having just had an encounter at the coffee shop, I think Jevon MacDonald qualifies as a well dressed (young) man.

I was eating lunch with my supervisor and another computer science instructor today, and the subject of men’s fashion came up. The instructor said that her brother, who all through his younger years was the scruffiest, most textbook pothead / hippie you could imagine, moved to PEI and suddenly became quite the yuppie, with nice suits and dapper ties and the SUV and expensive briefcase. Bizzaro indeed.

Agreed, let’s not forget the well dressed woman…. they are few and far between as well in the younger set.. as it it sheik to dress like the hottest pop tart( which means, not too much on)….

Something I overlooked originally: though I’m not a fan of still-wearing-the-scarf-when-inside, I think Daniel Burka is a Well-dressed Man™. To give you an idea of how stylish Daniel is, here’s a photo of me dressed-up as Daniel.