I really like the way that the developers of Adium, a Mac OS X instant messaging application, put an alias to the Applications folder right in the install disk image: 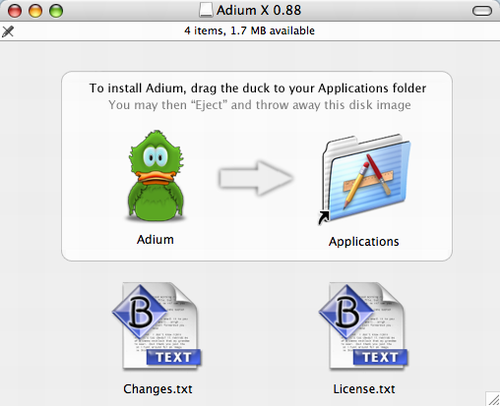 The result is that all I need to do when installing the application is drag it into the alias; otherwise (and much more commonly with OS X applications), I need to open up another Finder window, position it so that I can drag and drop from the Adium install window, and then drag Adium into Applications in the second window.

In the meantime, something that can make application installing a little faster is to drag the Applications folder into the documents section of the OS X “dock,” so that you end up like this:

Now installing apps is as simple as draging them from the install image onto this icon on the dock.

While this is probably good and handy trick for Adium to do, and maybe others should follow, this really seems like something that Apple should solve once for all software “installs”.

Or, if you’re a Quicksilver addict:

Doesn’t everyone have an Applications alias in the Dock?

Seriously, I worked on someone else’s machine a week or two back and was nonplussed not to find it there: I thought for a moment they have removed it.

I have had that set up since the Public Beta or so and can’t imagine not having it, especially on a 12” laptop.

Until September I had never used OSX. The one feature I was impressed with was uninstalling an applacation, simply drag it’s icon to the trash and poof, it’s gone… And they included the poof animation to make it all the better.

+1: Developers should make it easier for people to install their software.
+1: Apple should have a setting for “Always Show Sidebar in Finder Windows” that is by default set to ON.

You are making far too big a fuss over this.

The solution is very simple. Look at the illustration, see the lengthwise silver button at the right side of the window’s titlebar? If you click on it, the window will be expanded to include the “usual suspects” column of Applications, Home, etc.

Works in every window, works on every install DMG or CD.

Thanks, John, for pointing that out — who knew?