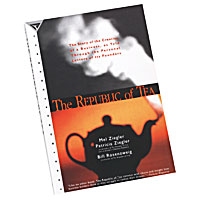 
That said, they do sell damn good tea. As I write this, I am sipping a cup of their Earl Greyer Decaf which is about the best Earl Grey from a bag I’ve ever found.


You used to be able to buy their unique canisters of tea at the Second Cup in Charlottetown before the local franchisee opted out of the chain and became the oddly named Crema Coffee. Now the closest you can come, I think, is the Barnes & Noble in Augusta, ME or possibly the Borders in Bangor. Or you can request a catalogue and order by mail. You will be happy you did.

The crema in Crema Coffee probably refers to the creamy brown layer that should form on top of a well-poured shot of espresso. A thick and rich crema is a desired quality in an espresso shot.