Because we were traveling with Ethan (Oliver’s service dog) on our trip to Europe this summer, we decided that we’d try to rent a camper van for our accommodations: this, we reasoned, would remove the need for nightly “are dogs okay?” negotiations with hotels, would place us out in some variation of nature (being easier for dog walks and general well-being) and, besides, who doesn’t entertain an Arlo Guthrie-fuelled dream of owning a VW microbus.

Fortunately, our friends Bill and Michelle had some experience in this regard, having rented a VW California for a 5 week trip with their daughters several years ago, so we got to know, through Bill’s eyes, something of the lay of the land, and what might be possible.

We ended up renting a camper from DRM, an established operation with several branches in Germany; the alternative was McRent, which has a broader footprint, but they didn’t have stock of the VW campers near where we wanted to start from. Here’s what it looked like on our first night of camping, on the Rhein north of Düsseldorf: 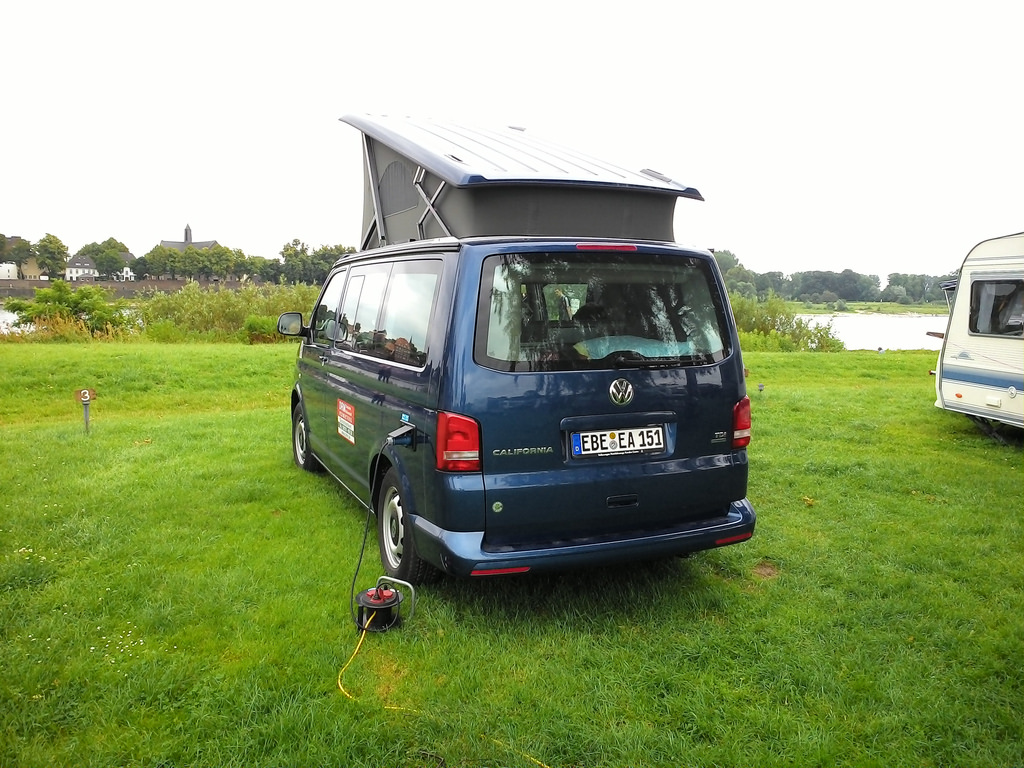 How much did it cost?

The cost for the rental broke down like this:

We had to leave a 1300 € damage deposit when we picked up the van; 890 € of that were returned to us after 4 issues (some scratched in the plastic and paint and a kink in the pop-up roof) were deducted.  We were careful with the van, and these issues, while clearly present during the inspection on return, came as an unexpected surprise. So the real cost, at the end of the day, was about 2000 €, or about $2900 Canadian.

Picking up the Camper

We chose the Düsseldorf station for pick up because it was nearest to our first destination of Enschede in the Netherlands. The DRM station was in the southern end of the city, so we took a cab from the airport when we arrived, which cost us about $60 and took about half an hour. When we arrived the van was waiting for us, and after some paperwork we were given a walk-through of all of its systems (pop-up roof, stove, fridge, etc.).  Given that we’d just stepped off a red-eye flight from Canada, I retained only about 60% of this information and were I to go through the process again I would have arranged for an overnight in a hotel before picking up the van.

We drove a total of 1119 km over 14 days, from Düsseldorf up into the Netherlands, across to Utrecht, down into Belgium and back to Düsseldorf. On the map (I was dropping a digital breadcrumb via my mobile phone every minute) the trip looked like this (there are some misplaced pins because of flaky GPS: we didn’t go into Amsterdam, for example; and the map is incomplete because sometimes my phone battery was dead, my mobile data plan ran out, or we were in an area of bad mobile coverage): 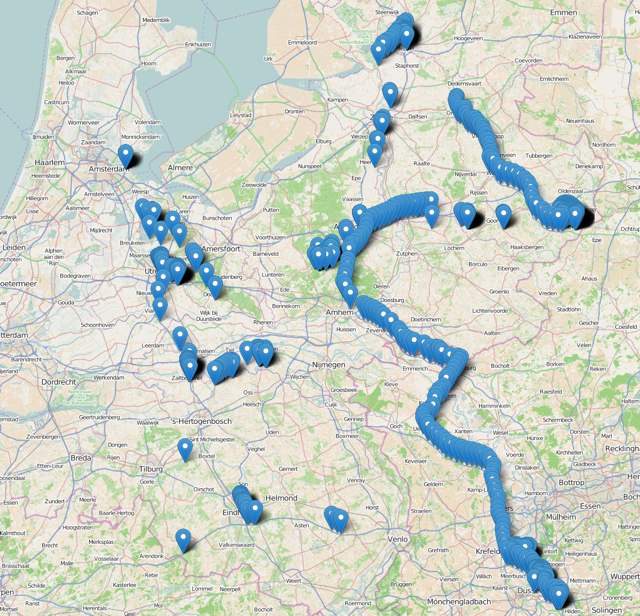 The diesel gas used by the VW cost about 1.40 € a litre and I gassed up once on pickup (the van is provided empty and you return it empty), and two other times after that, spending a total of $210 on gasoline over two weeks.

The van itself was equipped with two beds (one in the pop-up and one made from the folding rear seat combined with a cushion on the back shelf in the “trunk”), a small fridge (good for a few days food), a two-burner gas stove, and a tiny sink. There were two folding chairs that were stored on the back door, an outside table that snapped out of the side door, and an inside table that folded out into the middle of the passenger area. The “neato” factor was relatively high.

We were two adults, a 13 year old and a large standard poodle traveling together. With our son Oliver needing to sleep with our dog Ethan, and Ethan not able to navigate into the pop-up, that meant that Oliver always slept down below with Ethan. The pop-up bed was, in theory, big enough to hold both Catherine and I, but in practice we ended up switching back and forth, with one of us sleeping along upstairs, the more comfortable of the two situations, and the other down below with Ethan and Oliver, every other night.

Neither up nor down was particularly “comfortable,” per se: it was a step up from, say, sleeping in a tent on the ground in a sleeping bag, but the beds were hard and the lower bed had a lot of pointy bits and bumps that made it particularly uncomfortable. With some better bedding (the DRM-rental bedding wasn’t luxurious), especially some better pillows, this might have been made a tad better, but as it was, we got between 50% and 75% of a good night’s sleep over the two weeks. 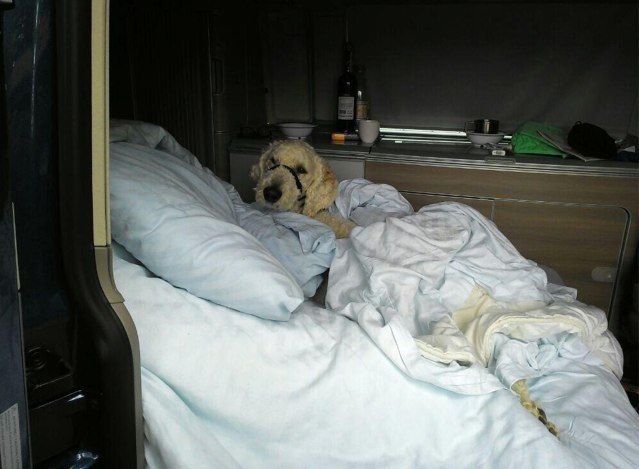 Despite the tiny kitchen, we were able to cook most of our meals in the van. We shopped in markets, small grocery stores and from roadside stands and cooked simple meals: coffee (or hot chocolate) with cereal and yoghurt for breakfast, sometimes supplemented by fried potatoes or the like, and sometimes with pastries from the campground canteen when available; pasta or rice or salad or fish or some such for lunch and supper. The campgrounds we stayed at generally had a central dishwashing area, so we didn’t need to wash the dishes in the tiny sink (which would have been impossible in any case). We ate well, and relatively inexpensively. 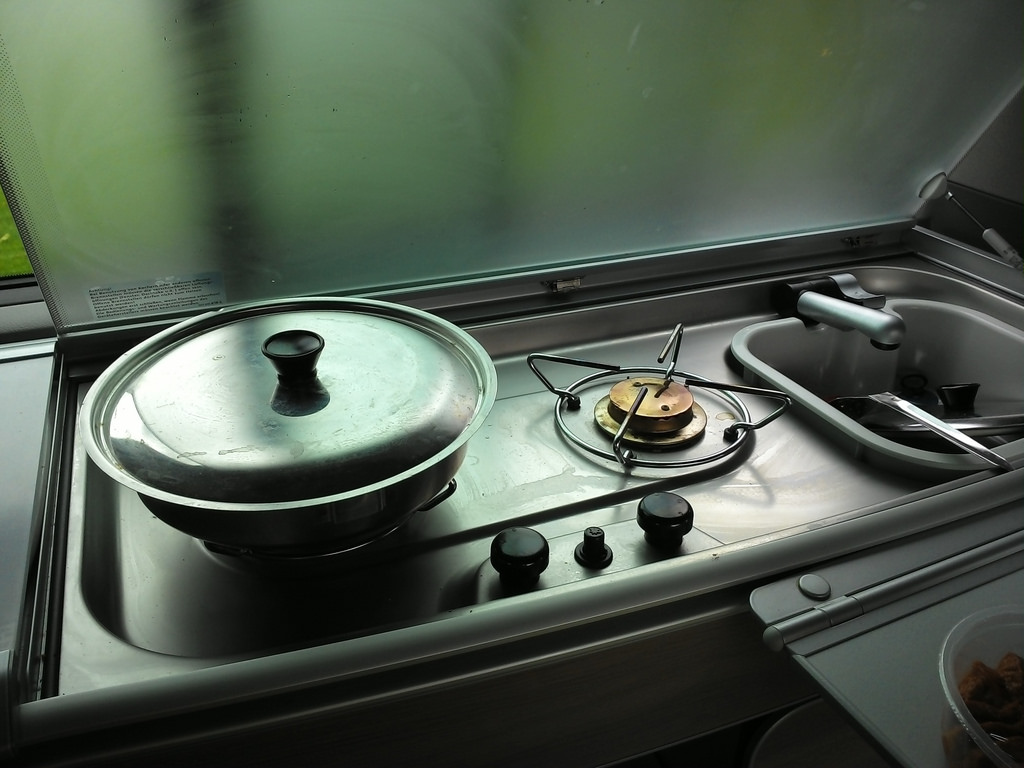 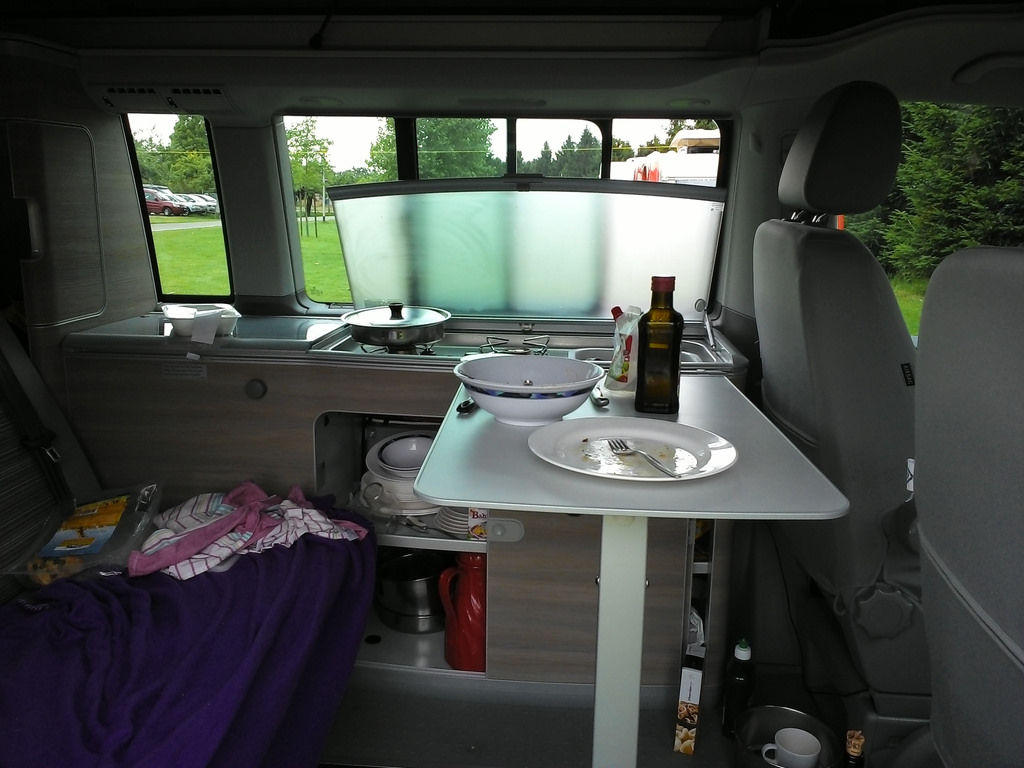 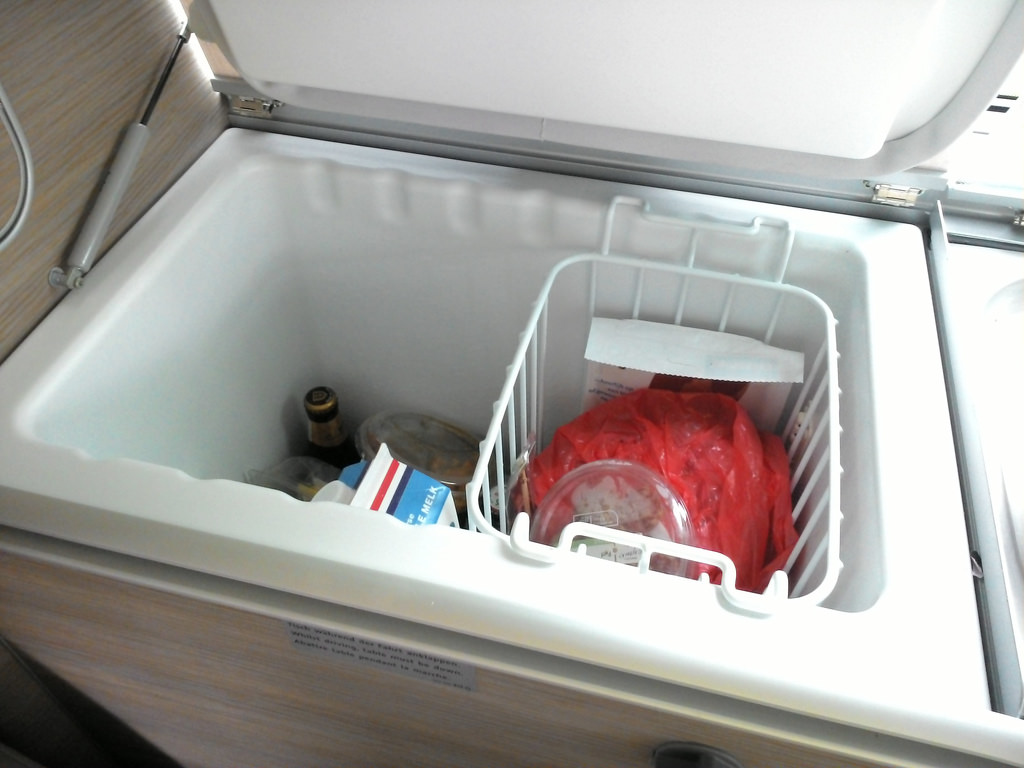 The VW California, for a house-on-wheels, is a pretty nice vehicle once it’s out on the road. It’s close enough to car-sized that the only size-related worries are remembering that it’s 2.3 m tall so can’t fit in many parking garages. The six-speed transmission was a joy to drive, and the van handled well even at 130 km/h on the autobahn.

Catherine and I sat in the bucket seats up front while were were driving, and Ethan and Oliver sat in the bench seat at the back. There was plenty of room for everyone. 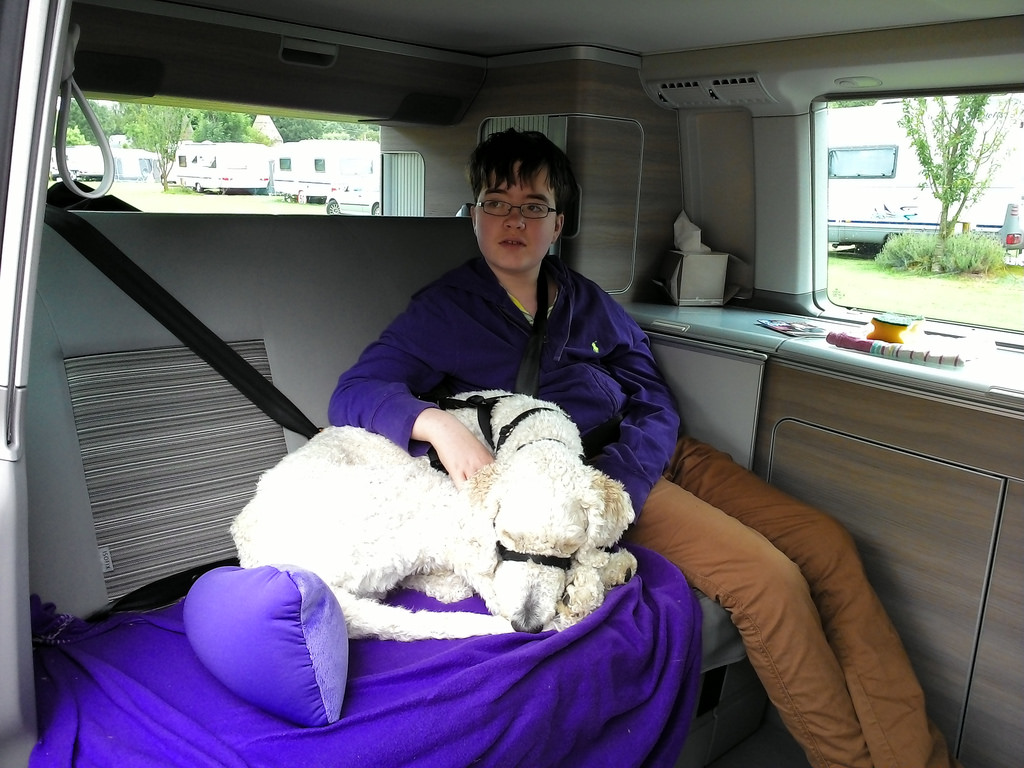 The pop-up roof operates electrically: with the ignition running you toggle a control-panel in the top centre console to “Pop Up” and then to “Open” and hold the button until the motors raise the pop-up to its full “up” position.  Taking the pop-up down is simply the reverse operation, with the added need to take care that the fabric of the pop-up tent doesn’t become snagged and that it folds inward and not outward.

The gas bottle for the stove is located at the bottom of the closet in the rear of the van: to use the stove the gas bottle valve needs to be opened and a switch under the burners in the dishes closet needs to be switched on. The burners themselves are electric-start: you turn the gas control to “on,” push down, and then click the ignition button. It took us a while to get this down, but eventually it became second nature.

All of the campsites we rented came with electricity: there’s a master electrical outlet on the back-left of the van on the outside that gets tethered, via some special-purpose cords, to the campground electric pole, which uses a special-purpose connector. All of the bits and bobs for this were included in the sliding cabinet under the bench seat. Sometimes the campground electric pole was some distance away from the campsite, but the included extension cord was always long enough to bridge the gap. The custom appears to be to simply run the extension cords from pole to camper across the dirt and grass, with no heed paid to tripping or driving-over dangers. 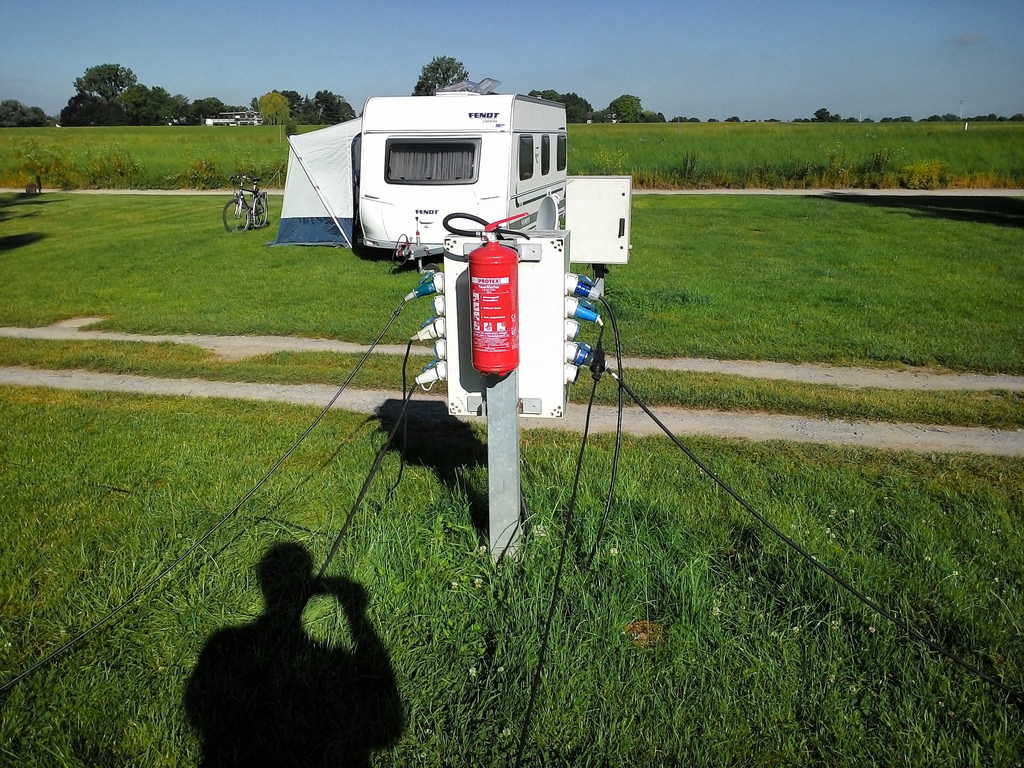 Inside the van the electricity operates the fridge, the lights, and feeds several electrical outlets (one standard European plug and a cigarette lighter plug behind the driver’s seat and a second cigarette lighter plug in the back). Confusingly, there’s a second standard European plug behond the driver’s seat that is only powered when driving, so if you are, as I was, charging a mobile device you need to switch outlets on departure or arrival.

Water to the sink comes from a water storage tank that’s filled from the inlet beside the electrical plug on the outside left rear; there’s a water-level indicator on the control panel at the front of the van and water for filling the tank up is generally easily available at campgrounds.  There’s a grey water storage tank that collects water from the sink; there’s a way to empty this, but it never filled up for us, so I never had to learn how.

We stayed in seven campsites over the 14 days:

Would we do it again?

The “house on your back” flexibility of the VW camper was certainly a nice feature of our vacation: we could stop anywhere for a hot lunch if we wanted, and we could explore the highways and back roads without fear that we’d ever be all that far from a campground. We got to see places that would have been difficult to get to without a vehicle, and we got to travel by the seat of our pants, making up the itinerary as we went along. The campgrounds themselves varied in quality, but were generally pleasant places to spend the night.

The van, while a little cramped for three plus dog, was just big enough to handle us, and I wouldn’t have wanted to drive around one of the larger more-RV-like larger options. That said, the jump from VW camper up to larger vehicles would, I imagine, significantly increase the comfort of the beds, and I can only imagine the sleeping-on-inlaws-couch feel of the VW beds becoming more problematic as Catherine and I age, so who knows.

We’ll need some time to chew on the experience before knowing whether it’s the sort of vacation we’d take again, but we all enjoyed the experience and are glad we choose to do it as we did.

Did you come across any providers that rented the slightly more vintage versions of the vw camper? eg circa 1960-80 bay window...