I was taking the bus by Enterprise car rental on University Avenue a few weeks ago when I spotted a Fiat 500 in the lot. When I got back downtown I called them up to see if it was available, but it was committed; they did, however, promise to give me a call when one became available, and a week later, this past Friday, they did, indeed, give me a call in the early afternoon.

I immediately hopped on the bus north and about 45 minutes later I was bopping around town.  I called up Catherine and arranged to head to the shore and soon thereafter we were motoring north toward Stanhope for an afternoon of trendy European fun. 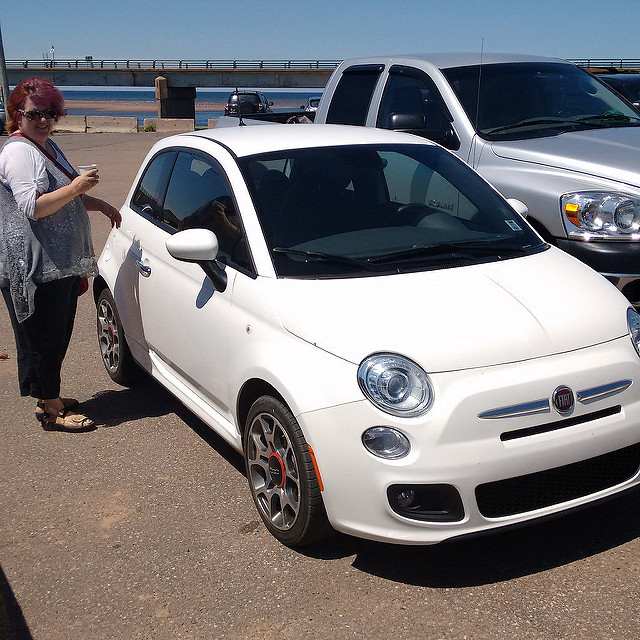 We’d rented the long station wagony version of the Fiat 500 last year for a trip to Maine, the Fiat 500 L, and it was a nice car. But the tiny original model is a completely different beast: it’s the smallest car I’ve ever drive (save for a test drive of a Smart Car), and yet inside it was roomy (at least for 2 people) and it drove like a nimble spitfire.

My favourite part of the car’s design is its centre console instrument cluster, which is wonder of compact design: 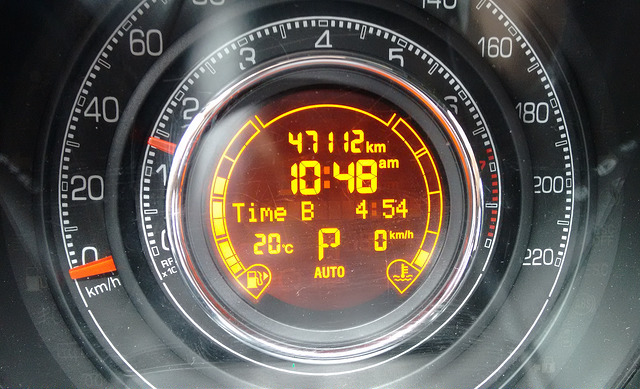 Packed in there are the speedometer (outside ring), tachometer (inside ring), odometer, time, temperature, digital speedometer, fuel level and engine temperature, the gear the engine’s in (P for Park on this display) and – the “Time B” line – a line of text that can be toggled among things like the current trip’s time and the current track playing on the radio.

I much prefer this to the ubiquitous touchscreen displays mid-console that every rental car I’ve driven in the past few years has been afflicted with.

We had the car for the weekend, so after Catherine and I motored out to the beach and back on Friday, Oliver and I went up to Souris and back on Saturday: it proved a perfect car for a father, son & dog trip.

When my car was being fixed earlier this year I rented a Fiat 500 and loved, loved it! I found it amazing on gas, and got lots of turned heads. It was fun to drive, though I thought the suspension was a little stiff. I told my son when we don't need to drive around his hockey bag, I might consider it!

The “cargo hold” is certainly an issue: we could fit in two beach chairs, and I think you could likely fit two smallish suitcases, but anything more than that would be a challenge. This is where the Fiat 500L shines: same design sensibility, but with loads of cargo room.  I’m intrigued by the Fiat 500X, which seems to be in a sweet spot between the two: I wonder how it would do for hockey bags?

I have rented a 500c (the one where the whole top of the car folds down) three times and the two in the summer were outstanding. What a fun and efficient vehicle.

It showed its lack of capability in the winter, though, when I crossed from Halifax to Charlottetown in a snowstorm two winters ago and ended up having to abandon backwards off the Trans Canada just before Bonshaw because it couldn't climb a hill. It takes a couple of inches of uncleared snow before it totally dies on the road.