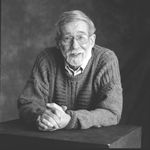 I do not have many heroes, but Peter Gzowski was one.

I count as one of the highlights of my life being interviewed by him — about technology, along with Kevin Kelly and Gerri Sinclair — while standing in a meadow at UPEI in the early summer of 1995.

Gzowski was a masterful interviewer (it helped, of course, that I was playing the role of the techno-sceptic, which meshed with his own views nicely), and a perfect gentleman. He had that ever so rare ability to appear curious about pretty well anything, and anyone who has ever been interviewed can tell you that this is like gold to the interviewee.

I have never been a strong Canadian nationalist, and consider most of what we call “truly Canadian” to be either boring or appropriated. By Peter Gzowski was, I think, Canadian through and through, one of those people who just couldn’t be considered American (or anything else). Not because he was a strong nationalist (he was), or made false attempts at “reflecting the regions” (he didn’t), but because, in his endearing, rumpled, pondering, avuncular way, he was someone we all had in common — a nextdoor neighbour for the nation.

My fondest memory of Peter comes from an episode in Peterborough in the late 1980s. The local CBC affiliate, CHEX-TV, wasn’t a bona fide CBC station, and therefore wasn’t obligated to air the entire CBC schedule. The result was that we local viewers got Wheel of Fortune and Jeopardy in place of shows like Adrienne Clarkson Presents and Friday Night.

For some reason the irked me strongly, and so I mounted a small rebellion involving letters to the editor, to local politicians and so on. I also wrote a letter to anyone else who I thought might share my concern.

Peter Gzowski was one of those I wrote to, and he wrote back a very nice note of support from his home on Lake Simcoe. For him to do that, amidst his life of Morningside and book writing and who knows what else, meant a tremendous amount to me.

I’ve since misplaced his note, but will never forget that, nor the endless hours of wonderful radio I listened to over the years.

I will miss Peter Gzowski.

Although Gzowski did his celebrated final broadcast in Moose Jaw, he had left the CBC by the time I started working for CBC Saskatchewan. I of course remember him and his style, but for much of his prime I was in school and was not a morning radio listener. The sense of loss that I feel is not as personal as others.

But I find I work at a CBC radio that still resonates with Gzowski’s absence. He set the example that we all strive for. A few weeks ago I sat in on a meeting of something called the “6-12 commitee”. This is a travelling group of CBC bigwigs that is looking into all aspects of programming between 6 AM and noon and how we might improve. We talked about all sorts of strategies and listener’s needs and focus groups and audience research. We struggled with trying to identify what we were all about and what we wanted to do. Eventually someone spoke up and said: “We really don’t connect with the country anymore the way we did when Gzowski was around”.

The room hung in silence, but we all realized that it was true. It was a sort of bleak realization, but it does sort of give us an ideal to strive for. And when you work at CBC and sometimes you wonder what exactly is that you’re trying to do (which happens more often than you might think) it can’t hurt to think of what Gzowski was able to do: make Canadians from Iqualuit to La Ronge to Corner Brook feel connected and comfortable and curious every morning in front of their radio sets.

Sometimes we make radio harder than it is. Gzowski made it seem easy. We miss him, but what Gzowski represneted has not left CBC. It haunts us, sometimes it vexes us, tortures us even, but ultimately it makes us strive to try and make better radio. That’s a pretty good legacy to leave behind ,I think.

I’m sure this experience is being replicated across the country, but our phones here at CBC sask are lighting up with Gzowski stories. Some are funny, some are sad, but clearly he touched millions of Canadians. We’ve pretty much given up on regular programming today and are just letting people call in with memories.

I have been listening to the tributes for the last two days and had some great recollections and some sadness but I also find the immediate elevation to nationalistic sainthood a tad disturbing. I stopped listening to Gzowski in around 1994 at a point where I thought that too many of the “important” canadians he was interviewing were being described as friends. Vicki G. was always a better interviewer and her fanfareless departure was an insult. I am not such a grump that being nice is not allowed but when the show was being presented as a cornerstone of the CBC’s news service, the loss of objectivity weared. Some things I do not miss [perhaps of the era as much as the show] are the unending picking at the “constitutional debate”, review of canadian arts limited to praise — his use of the word “celebrate” meant whatever topic followed was CBC approved “canadian” — and the unending “three person panels”. What I did like was the voice, the intellegence, the warmth, the political panel, the familiarity and the amazing resources made available to the show. The show went off the air five or so years ago and, while what has replaced it has not demanded my respect in the same way, it has simply earned it. Sadly, one great legacy he leaves is the public death by tobbacco addiction of another person who might have added to the life of the country for another 20 years. I am glad I have not heard the phrase “untimely death”. Best moment I recall: coming aboard Brian Mulroney angrily and using the phrase “…now I am just a simple man but…” over and over to confront him on his economic policies.

Back in the 70’s and 80’s we where stationed at CFB Baden-Soelingen, Germany. My father at that time was with the Canadian Armed Forces. CFB Baden & CFB Lahr always broadcasted Peter Gzowski’s ‘Morningside’.
So at an early age my ears were accustomed to the great voice of Peter Gzowski. Those days I remember fondly.

However, the greatest honour bestowed upon me, was meeting Mr. Gzowski personally in 2000 in Toronto. He didn’t look too well and he wasn’t the ‘Old Peter’ as I had known him from radio. But, non-the-less, I met him in person. He still had his magnetic charm and his unforgetable voice known to millions in North America, as in Europe. Ofcourse, I was deeply saddned from hearing of his death in 2002.

I am sure his legacy and my fond memories are shared by many.