For reasons I’m not entirely clear on (yes, there is irony in this), although it is 10:35 p.m. here in Copenhagen, the sun is only just now setting completely. I’m sure that this has something to do with latitude.

I was wondering, just now, why I’m so exhausted at this point. Sober second thought: I’ve been conferencing for 12 hours straight, bracketed by longish (for me) bicycle rides. Of course I’m exhausted. As such this is one of those years that I don’t stay at reboot late into the night to participate in live video chats with the inventor of the computer mouse, etc.

I started the day with back to back to back commercial victories: by 9:00 a.m. I had secured a Danish SIM card for my mobile phone (from the friendly and helpful man at the Telia outlet in Central Station), used the station’s Sidewalk Express Internet station to update my Jaiku and Plazes profiles to reflect my newfound mobile number, and rented a 3-speed bicycle for two days.

I immediately headed west and, as last year, I managed to overshoot the reboot site by about 2km — I get confused by all those smokestacks and the one I head to never turns out to be the right one. But I got there, got registered, and was in my seat for the 10:00 a.m. start.

While aforementioned exhaustion prohibits a thorough review of the day’s proceedings, here is a quick run through the highlights:

The big and important event in my life today, however, is that by virtue of a technical glitch, I’ve been reassigned to Sweden: witness my reboot badge’s country affiliation: 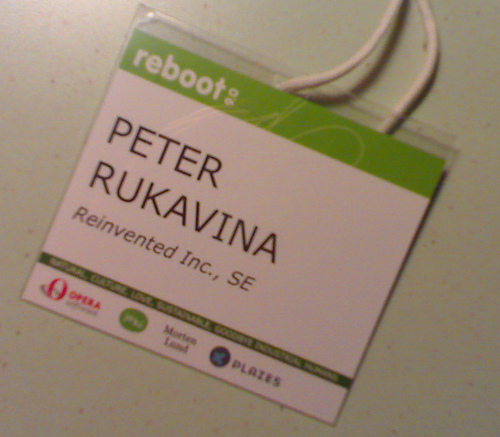 Fortunately my Swedish acquaintances in the rebootosphere have welcomed me in, promised to teach me the national anthem, etc. I’m going to have to prepare an acceptable set of reasons for Catherine and Oliver as to why we’re relocating to Stockholm (casting a misprint as a Revelation will probably not cut it).

Must sleep now in preparation for doing it all over again tomorrow.

You were missed at Gong Bao Thursday.