I ended up working from home on Friday, hanging out with Oliver on a chilly, rainy Berlin day while Catherine made her way up to Mitte to hang out with knitters for the afternoon (she got very, very wet in the process, but her spirit persevered). We suffered the rain for a block and a half around noon to go to Schönes Café for a late breakfast of chocolate-banana pancakes (for Oliver; very good), muesli (for me; also very good) and coffee. 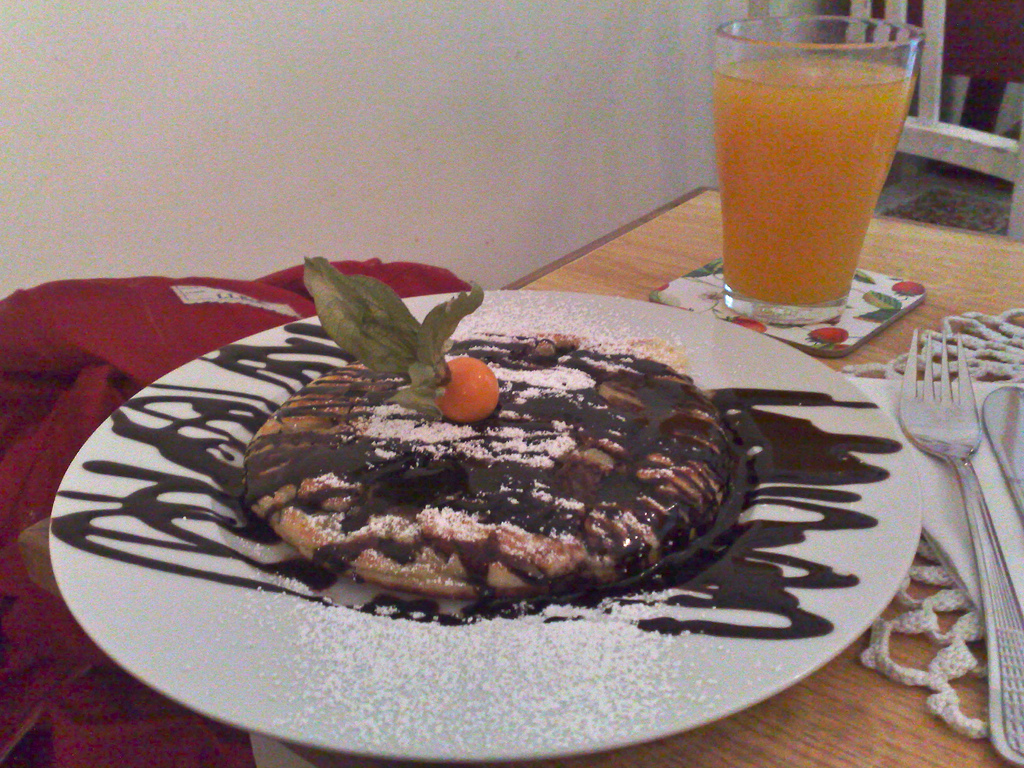 We spent the rest of the afternoon tweaking an iPhone app that’s under development (me), and colouring pictures of Berlin and playing Scribblenauts (Oliver).

Catherine found her way home through the rain around supper time and rather than cooking in or making our way out into the rain again we opted to just go down one floor to Primo Maggio, the Italian restaurant that, when the windows are open, we drift off to sleep listening to the hustle of.

As it happened, Friday night was a special night at Primo Maggio: the American singer-songwriter Xoe Wise was playing live, and much of the restaurant was taken up with a seemingly-infinite entourage. Fortunately we were able to carve out a little space for ourselves, and had a fantastic meal: I had pasta serve with cauliflower and chili oil, which sounds bizarre but was knock-socks-off fantastic. Catherine reported her pork was perfectly cooked, and Oliver inhaled his truffle ravioli. Along the way we were treated to this:

The lo-fi rendition doesn’t really to justice to Wise; visit her website for higher fidelity. Around 10:00 p.m. we ambled upstairs and fell quickly and soundly to sleep.

Saturday: more rain. Undaunted we decided to head to the the “vegan festival” at Alexanderplatz. Why, I’m not sure, as the prospect of soggy vegans doesn’t seem appealing; but we’re here to collect experiences, so.

Arriving at Alexanderplatz we immediately decided an emergency coffee and breakfast diversion were in order and so hopped back on the U8 and rode one stop up to Weinmeisterstrasse walked through the rain (did I mention it was raining?) to Barcomi’s Deli which is cleverly hidden in Sophie-Gips-Höfe, which I take to mean “the court that exists between Sophienstrasse and Gipstrasse.” Which is where we (cleverly) found it.

If Berliners know how to do one thing it is “laze around on the weekend,” and so we found Barcomi’s packed to the gills with people doing exactly that. Oliver and I approximated a Charlottetown Saturday morning by ordered smoked salmon bagels and Catherine had a BLT. The coffee was decidedly good. Then back out into the rain.

At this point I acquired an umbrella (Catherine and Oliver already tucked safe into their rain jackets were much less affected by the ever-present rain). It cost me €2.75, which is the best €2.75 I’ve ever spent. And it’s amazing how much umbrella you can get for €2.75, especially when you go for the full-length model.

Full and happy – and dryish – we decided to walk our way back to Alexanderplatz. At which point I remembered reading about Buchstabenmuseum, open perhaps only on the weekends, and only for a couple of hours, and right nearby, and managed to convince Catherine that this would make for a fun diversion. 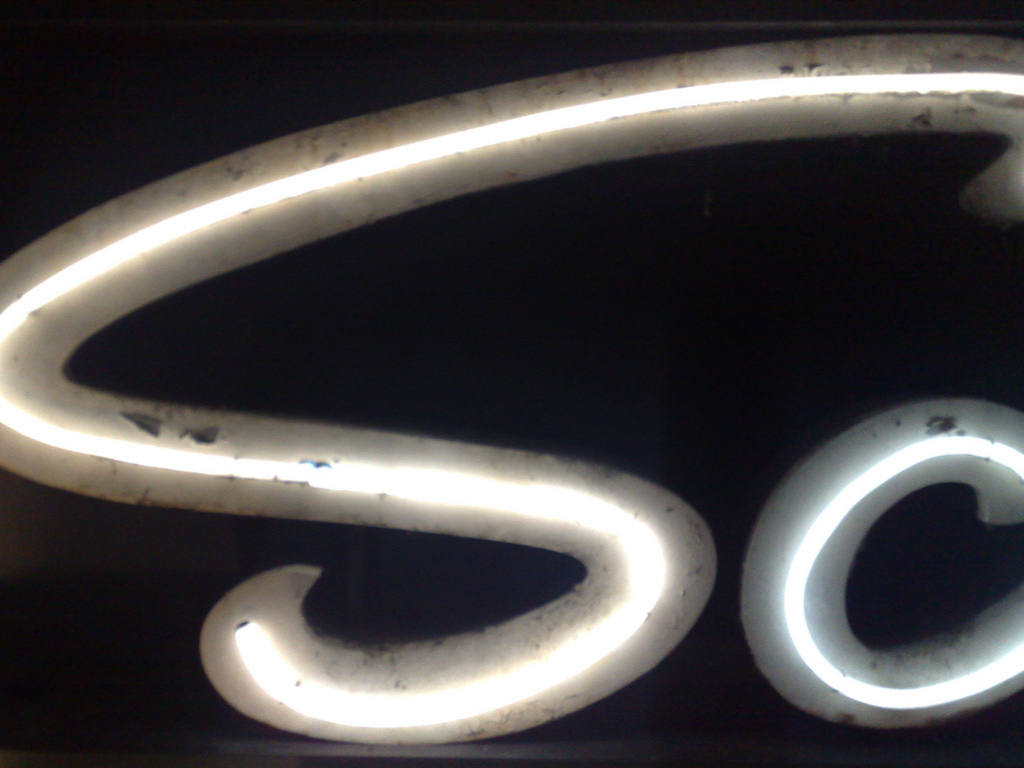 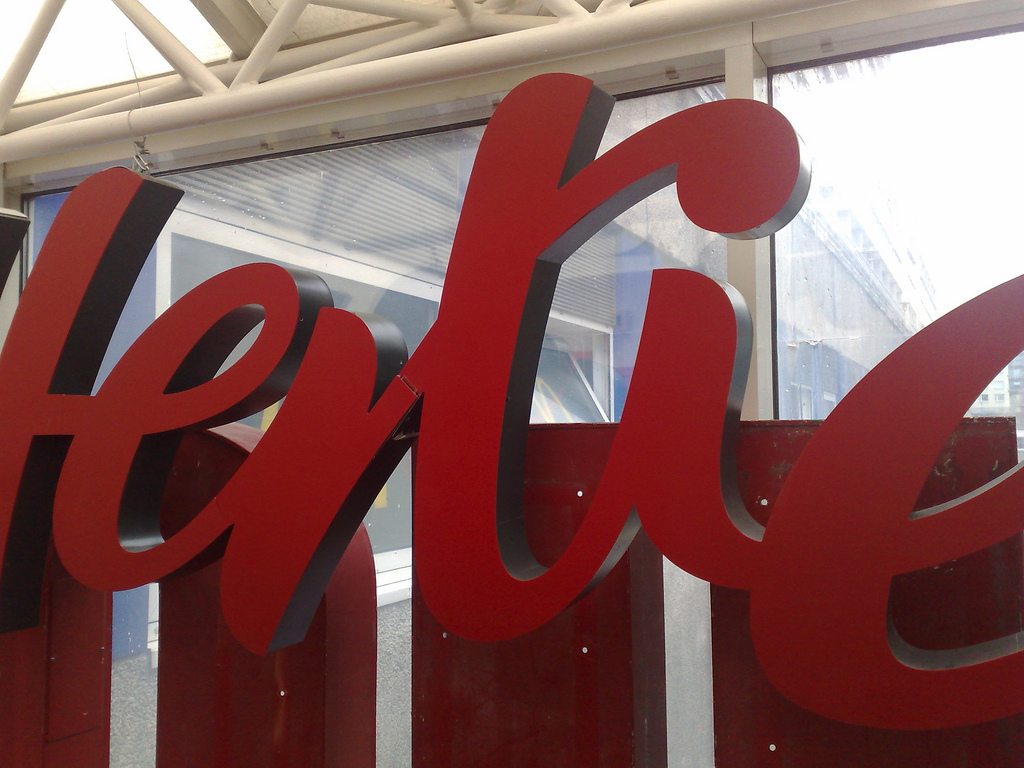 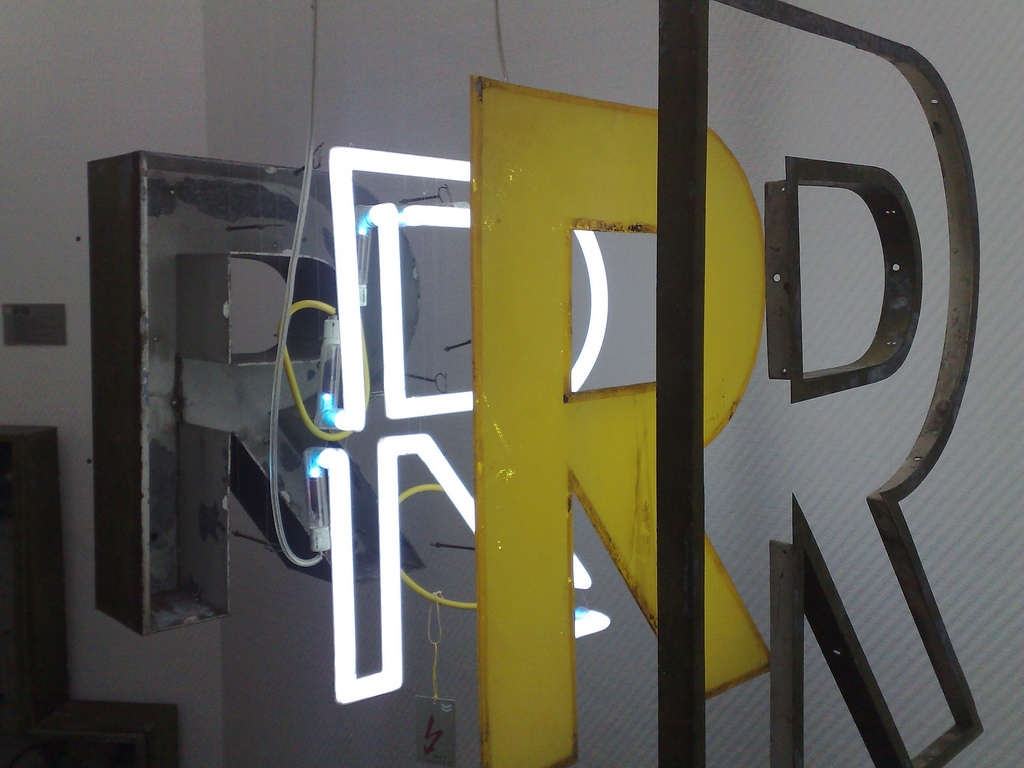 Buchstabenmuseum is a museum of rescued neon signage, arranged by colour and style and with helpful documentation. For me it was among the greatest museums ever. That Catherine and Oliver allowed me 30 minutes to wander around and take photos is a testament to their love and patience. I will have to remember to be more patient at the wool and Phineas and Ferb museums when we end up there.

Happily full of neon goodness we headed back to Alexanderplatz where, as predicted, we found the soggy vegans going hard at it. We weren’t quite hungry enough to line up for food, and not quite engaged enough to watch the inhumane-treatment-of-pigs videos, so we made a quick once-around and then got back on the subway to head east to Frankfurter Tor.

The allure of Frankfurter Tor was that Tiffany, the weekend previous, had told us it was the go-to place for used clothing at a large outlet of the Humana chain. Sure enough we found the Humana there, but before we could brave it we needed to eat again (see also “lazing around”) and so found our way down the street to Goodies, which, it turns out, may be a vegan café. Regardless, the food and especially the smoothies were good; Catherine and I both had the “ginger cooler,” which was a wall of ginger, albeit a pleasant one.

Fed (again), we walked back to Humana and discovered it to be four floors of Salvation Army Thrift Storesque goodness. Had we had more time, more fashion imagination, and more ability to withstand the vague stench of death that infuses all such stores we might have emerged victorious; as it was we quickly breezed through and escape unencumbered.

We’re obviously not cut out for the upcycling boho vegan eurolifestyle.

As such, we headed to Potsdamer Platz, thinking a movie – Larry Crowne at the Cinestar at 4:15 p.m. in this case – might be just what we needed for a rainy day.

What we hadn’t factored in was (a) that every other English-speaking person in Berlin had the same idea and (b) Potsdamer Platz is a barren simulacrum of urbanity.

And so, still in the ticket line at 4:30 p.m. and growing evermore uncomfortable at the lack of shawarma shops we ran back to the subway and headed back to warmer ground, ending up, instead, at the 5:15 p.m. showing of Beginners at the Babylon Kreuzberg, a movie that passed Oliver’s movie filter, but that might have been one-too-many “complicated family dramas” for his kidfulness. When I asked him what the movie was about once it was over he said “struggles,” so he obviously got it. But it may be time for The Smurfs next.

Emerging into the (damp) Berlin evening we walked the short walk home, picked up a couple of €2,99 pizzas at the place up the block, and settled in for the night.

If you are into cinema (that is: cinema, like in “cinema”, not like in “movies”), go to the “International” (http://www.kino-international…. Come early. Ignore the movie. Enjoy the building. Sit in the 1st floor lounge and have drinks. Sit in the lounge more. Have more drinks. Enjoy the building while places like these still exist. (Further down on Warschauer Straße than ‘Goodies’ is “Pizza Vira”. Excellent Pizza, Pasta and Coffee, friendly owner, non-standard music. Nice places on Simon-Dach-Straße, one street east from there, too. A Swiss place on its south end in particular.)