I was intrigued to find this passage in the R. T. Holman entry in the Dictionary of Canadian Biography earlier this week:

R. T. Holman was a merchant who stood apart from the social life of his small community, who apparently neither sought nor gained political favours, and who possessed unorthodox religious beliefs. Though Holman had been born into a Baptist family, his father had left the church in 1835 following a doctrinal disagreement with a clergyman. It is not evident how Robert’s views on religion developed, but the census of 1861 listed him as a “universalist” and by the 1870s he had abandoned organized religion in favour of free thought. Not content to object passively to the predominant religious sentiment of the community, he brought speakers to Summerside to preach humanism. One example of his antipathy was his response to the province’s proclamation of Thanksgiving in 1899. He protested in a half-page advertisement in the Pioneer that the day should be “free from cant, free from hypocracy and free from policy” and that consequently his stores would remain open.

Prince Edward Island is a challenging place to be weird, and so it’s useful to look to history for examples of successful weird people like Holman.

The ad that’s referenced is an interesting one. Here’s the version that ran on October 18, 1899 – the day before Thanksgiving – in the Summerside Journal: 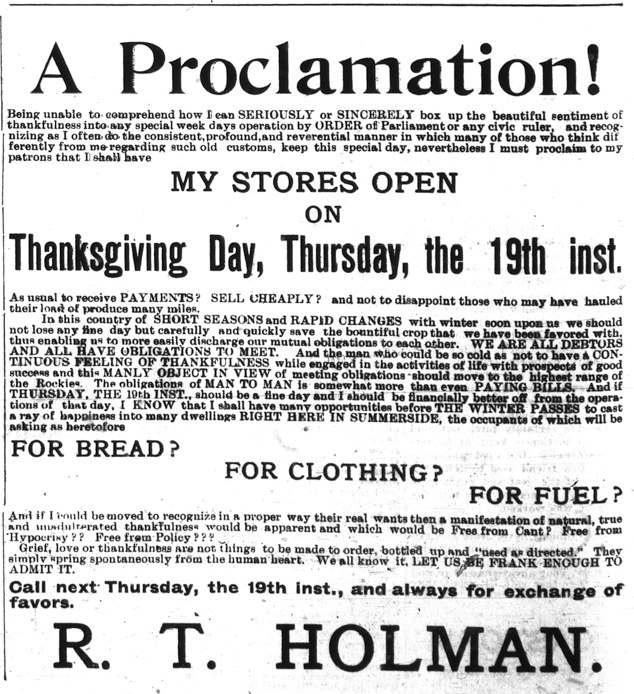 Being unable to comprehend how I can SERIOUSLY or SINCERELY box up the beautiful sentiment of thankfulness into any special week days operation by ORDER of Parliament or any civic ruler, and recognizing as I often do the consistent, profound, and reverential manner in which many of those who think differently from me regarding such old customs, keep this special day, nevertheless I must proclaim to my patrons that I shall have

As usual to receive PAYMENTS? SELL CHEAPLY? and not to disappoint those who may have hauled their load of produce many miles.

In this country of SHORT SEASONS and RAPID CHANGES with winter soon upon us we should not lose any fine day but carefully and quickly save the bountiful crop that we have been favored with, thus enabling us to more easily discharge our mutual obligations to each other. WE ARE ALL DEBTORS AND ALL HAVE OBLIGATIONS TO MEET. And the man who could be so cold as not to have a CONTINUOUS FEELING OF THANKFULNESS while engaged in the activities of life with prospects of good success and this MANLY OBJECT IN VIEW is somewhat more than even PAYING BILLS. And if THURSDAY, THE 19th INST., should be a fine day and I should be financially better off from the operations of the day, I KNOW that I shall have many opportunities before THE WINTER PASSES to cast a ray of happiness into many dwellings RIGHT HERE IN SUMMERSIDE, the occupants of which will be asking heretofore

FOR BREAD? FOR CLOTHING? FOR FUEL?

And if I could be moved to recognize in a proper way their real wants then a manifestation of natural, true and unadulterated thankfulness would be apparent and which would be Free from Cant? Free from Hypocrisy?? Free from Policy???

Grief, love or thankfulness are not things to be made to order, bottled up and “used as directed.” They simply spring spontaneously from the human heart. We all know it, LET US BE FRANK ENOUGH TO ADMIT IT.

Call next Thursday, the 19th inst., and always for exchange of favors.