There is a park in front of the Coles Building in downtown Charlottetown that contains a rock from every province in Canada (I wrote of the park earlier when Little Bo Peep invaded it). 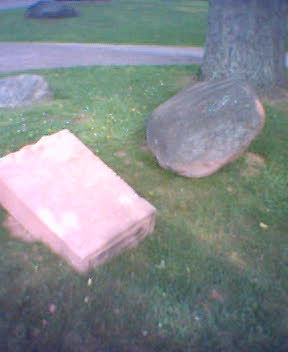 We are currently all memorial crazy here in Charlottetown: nary a years goes by without a new memorial going up or an old one being refurbished. I’m all for memorials and tributes and what they memorialize, but I don’t think that new monuments should be allowed to plow over old ones.

In this case, the new $300,000 Service Memorial Fountain has displaced the rock from Quebec: as you can see in the photo here, the rock and its descriptive plaque have been left asunder, lying barren on the ground.

Presumably it took some Islander some considerable effort sometime in the past to assemble this rock collection. To say nothing of the efforts of the provinces who found representative rocks to send our way. The park has taken a beating in recent years: if it’s not gaudy light displays being draped around, it’s Parks Canada removing the nice path that used to interconnect them all. This latest indignity, however, reaches a new level. We owe it to them to steward the rock park with respect.

It is defintley disrespectful indeed. However I find it more foolish that they are building another fountain roughly 100ft from a perfectly fine functioning fountain. What is worse is that it is scheduled to be ‘opened’ next year..A YEAR to make a fountain, I find that rather mindboggling personally.