Next month I’ll be a guest lecturer in the University of Prince Edward Island course Philosophy 105: Technology, Values and Science, a course described like this for prospective students:

This course explores the connections among technology, human values, and science that are manifested in society, economic systems, and relationships between humans and the natural world. The study of the connections reveal the vast impact that science and technology have on our understanding of the world and our views on the future as well as on personal identity and the human body. It exposes students to critical examination of objectivity in scientific research, progress in technology and science, scientific risk assessment, and genetic engineering. No particular background in science is assumed in this course.

Regular readers may recall that I audited this course six years ago, and wacky hijinks ensued including a guest lecture Privacy and the Obligation to Explain.

I plan to return to the privacy well with an updated examination of some of the same issues I discussed in 2009, and also to promote discussion about open data, about experience design, about hacker culture, and about how the design of educational systems – like, say, Philosophy 105 – reflects membership in one school of philosophy of technology or another.

I am both particularly well-suited and wholly unsuited to take on this role.

I am a university drop-out with some significant doubts as to the practical and spiritual value of post-secondary education.

I am a technologist by trade and inclination.

I’ve spent 36 years immersed in the conduct of and critical examination of digital culture.

I am a technology-skeptic, suspicious of those who ready the clarion to celebrate the coming technological utopia.

I am a technology-booster, witness to and beneficiary of the transformative power of a digital metaphors in changing power relationships, self-education and community organization.

The reason I’m going ahead, and the reason I have the faith required, is because I take intellectual sustenance from a book I first read 30 years ago, Teaching as a Subversive Activity, by Neil Postman and Charles Weingartner​ (read my story about how I came to read it, or just read the book itself as a PDF). From Chapter One, Crap Detecting:

The need for this kind of perspective has always been urgent but never so urgent as now. We will not take you again through that painful catalogue of twentieth-century problems we cited in our introduction. There are, however, three particular problems which force us to conclude that the schools must consciously remake themselves into training centers for ‘subversion’. In one sense, they are all one problem but for purposes of focus may be distinguished from each other.

The first goes under the name of the ‘communications revolution’ or media change. As Father John Culkin of Fordham University likes to say, a lot of things have happened in this century and most of them plug into walls. To get some perspective on the electronic plug, imagine that your home and all the other homes and buildings in your neighborhood have been cordoned off, and from than will be removed all the electric and electronic inventions that have appeared in the last fifty years. The media will be subtracted in reverse order with the most recent going first. The first thing to leave your house, then, is the television set — and everybody will stand there as if they are attending the funeral of a friend, wondering, ‘What are we going to do tonight?’ After rearranging the furniture so that it is no longer aimed at a blank space in the room, you suggest going to the movie. But there won’t be any. Nor will there be LP records, tapes, radio, telephone, or telegraph. If you are thinking that the absence of the media would only affect your entertainment and information, remember that, at some point, your electric lights would be removed, and your refrigerator, and your heating system, and your air conditioner. In short, you would have to be a totally different person from what you are in order to survive for more than a day. The chances are slim that you could modify yourself and your patterns of living and believing fast enough to save yourself. As you were expiring, you would at least know something about how it was before the electric plug. Or perhaps you wouldn’t. In any case, if you had energy and interest enough to hear him, any good ecologist could inform you of the logic of your problem: a change in an environment is rarely only additive or linear. You seldom, if ever, have an old environment plus a new element, such as a printing press or an electric plug. What you have is a totally new environment requiring a whole new repertoire of survival strategies. In no case is this more certain than when the new elements are technological. Then, in no case will the new environment be more radically different from the old than in political and social forms of life. When you plug something into a wall, someone is getting plugged into you. Which means you need new patterns of defense, perception, understanding, evaluation. You need a new kind of education.

Postman and Weingartner wrote that 50 years ago, and the “communications revolution” or “media change” that they wrote about has become something they wouldn’t recognize practically, but the essential qualities of which they would see, I think, directly connected to everything they wrote and thought back then.

I truly believe that we need “new patterns of defense, perception, understanding, evaluation” and I think I have something to contribute to this discussion as someone who, relatively speaking, has lived both with the plug and without.

As an interesting coincidence, one of the class exercises for Philosophy 105, then and now, assigned by its bona fide professor, Neb Kujundzic, is to go for 24 hours without digital technology; here’s what the class was given back then: 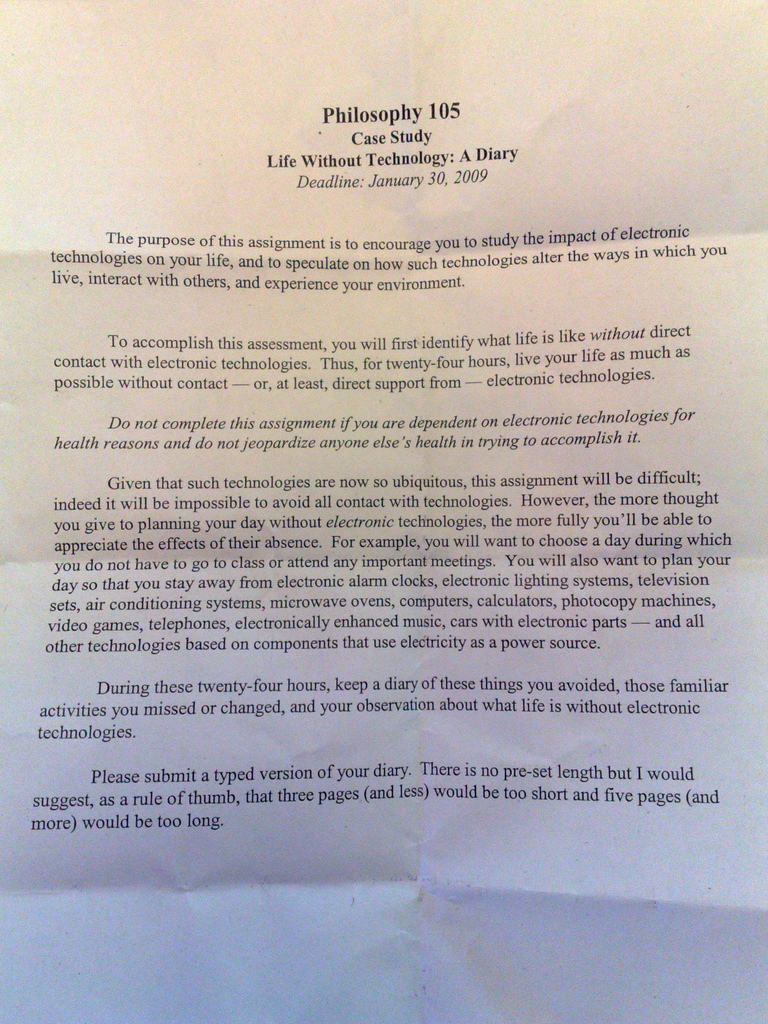 Although I was merely a fly on the wall for the course, not a student, I went through the exercise – something Oliver will never let me forget, as he bore the brunt of the agony involved and got none of the glory. I posted my diary in this space, a diary that began like this: 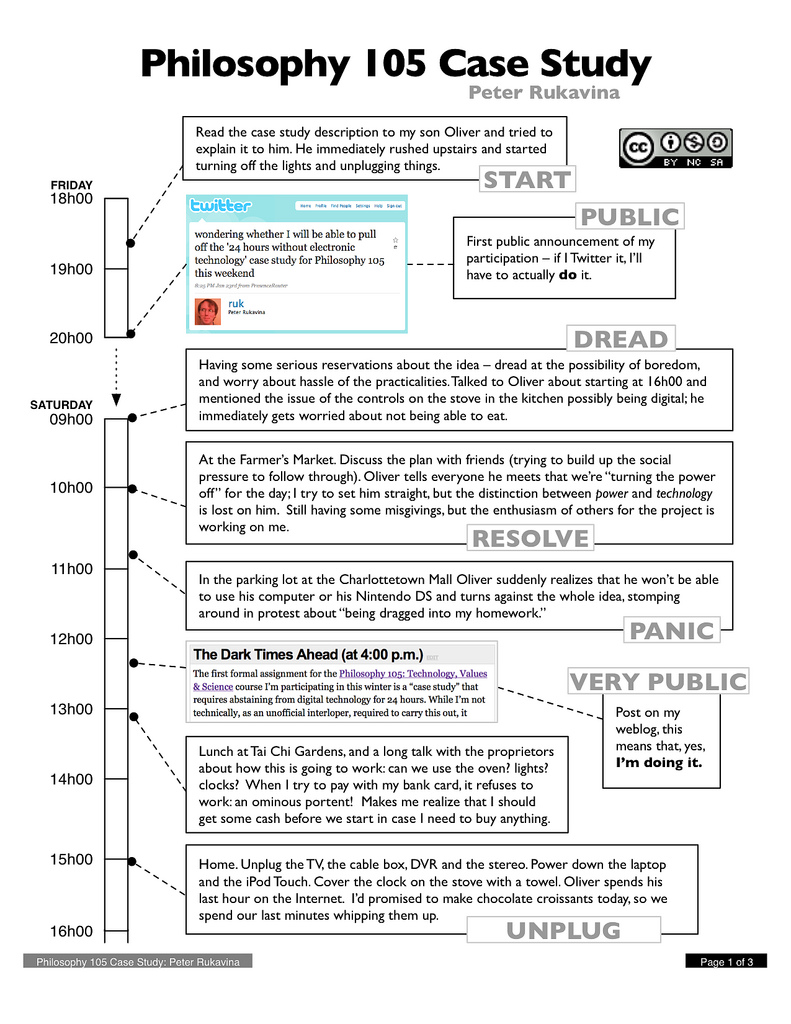 And so, at least for 24 hours, we took Postman and Weingartner’s challenge. And it was fascinating.

In February, with the 21 students enrolled in Philosophy 105, I hope to use this as a jumping off point of contemporary issues in technology, values and science.

Today I’m going up to campus to meet the class of students for the first time; I’ll have a month of thinking before we see each other again and enter into a formal dialog together.

I surely will also have to try this experiment Peter. I like to think that with my background and interest in meditation, yoga, dance, and reading I might be able to entertain myself well through the abstinence.
I also would be very interested to sit in on your classes as a guest lecturer.
The best of luck! :)

I love that you've gone from student to professor. Seems like a natural continuum. Luck.

He's The Substitute Teacher for Neb.

This is a Good Website for University Students if You need to talk to them about Consuming Water and Electricity.
http://consuming.ca/

I can't find the link to give to you, but on Facebook I read something recently about an experiment on 67 or so school age kids, in which they had to go 8 hours without communicating in any way with friends--to test their capacity to amuse themselves. All but 3 broke down and dropped out. On the other hand, the story said, many were good for another go, and after several attempts most were able to succeed. They also said they learned something about themselves. It was testing a different question, but your challenge reminded me.

PS: Good luck! Not that I think you need it.