News came over the wire this morning that the Province of PEI has prospected a “defence” company to locate on the Island: Island welcomes defence contractor Portsmouth Atlantic. The news release makes it sound like this company is making kittens and apple pie:

“Portsmouth Atlantic is a dedicated centre of excellence for new innovation in environmental management systems for marine technology and specifically a world-leading maker of systems that protect warships from chemical, biological, radiological and nuclear hazards. This is a company with decades of experience, a solid reputation and a growing presence in world markets.”

What goes unstated is that the parent company of Portsmouth Atlantic, Portsmouth Aviation is an arms manufacturer; in addition to making happy products that just keep soliders safe, they also make things that help kill people:

Our more recent activities include the integration and certification of Paveway II / Enhanced Paveway 2 and the Freefall 1000lb Bomb onto RAF Typhoon; the expansion of the release envelope for UK and US weapons on export Tornado, and the provision of hardware and flight trials support to Eurofighter Typhoon partner Nations.

The Royal Air Force has a handy guide to this sort of weaponry.

The last time our government tried something like this was in the mid-1980s when Premier Lee prospected Litton Industries to build an anti-missle radar system on PEI; his successor, the elder Premier Ghiz, under public pressure, subsequently cancelled the deal. Here’s the story as it was told in The Provincial State in Canada: Politics in the Provinces and Territories: 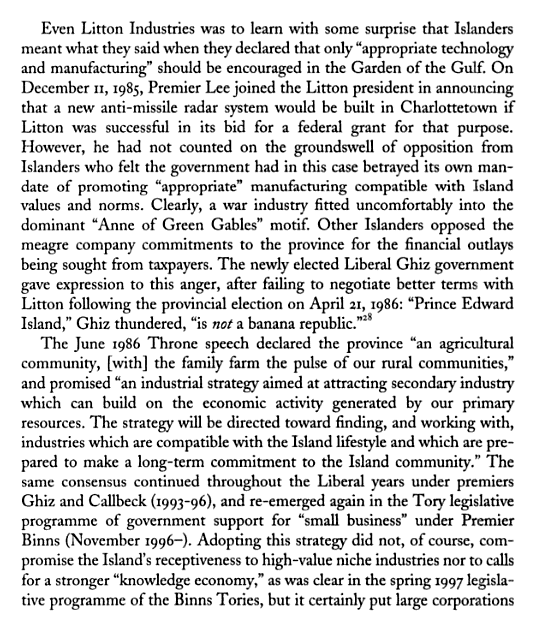 “The strategy will be directed toward finding, and working with, industries which are compatible with the Island lifestyle” is, while perhaps a touch vague to be truly useful, not a bad place to start an economic development strategy. I, for one, would prefer that arms manufacturers not design and manufacture their wares here, and, especially, that our tax dollars not be used to incentivize them to do so.

Interestingly, from the clip provided, the elder Ghiz “thundered” about a an ethical philosophy toward economic development only *after* failing to negotiate a better deal with Litton. He was an expert at conveniently embracing popular rhetoric. Fortunately, once his new position took root, I agree, it did *generally* guide subsequent administrations. The current government appears to have no guiding philosophy toward economic development or anything else other than grabbing for whatever comes its way through circumstance. On that basis, its hard to criticize the younger Ghiz’s regime as, at least, it is bringing in something, anything. But it is an important, profound and fair response to ask the questions you are implying: Is this kind of industry the right fit for our Island society? Is this what we have become? A branch plant economy for the military-industrial complex? Is this what we want to become? What is the nature of our society and our economy? What is appropriate economic development for our Island society? Who are we? What do we want to be?