This afternoon I printed up a sort of “do it yourself civil disobedience kit” with an excerpt from the City of Charlottetown’s Zoning and Development Bylaw: an excerpt from its section on signage, which places rather inflexible limits on our constitutionally-guaranteed right to “freedom of thought, belief, opinion and expression, including freedom of the press and other media of communication.” 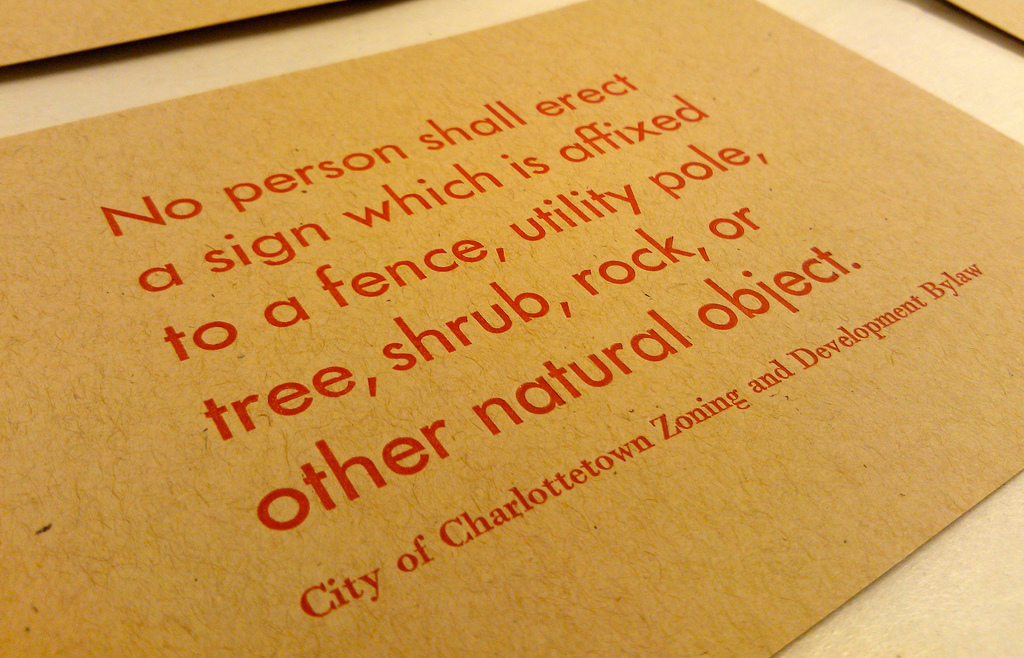 Regular readers will recall that this very issue was the topic considered in the 1993 Supreme Court of Canada case Ramsden v. Peterborough (City) where the court said, of the City of Peterborough, Ontario bylaw of the day, in part:

It is clear that the effect of the by-law is to limit expression.  The absolute prohibition of postering on public property prevents the communication of political, cultural and artistic messages.

The Peterborough bylaw’s wording was:

In other words, much the same as we have today here in Charlottetown, albeit without the prohibition on affixing signs to shrubs, rocks and other natural objects we enjoy.

The Court cited another case, Committee for the Commonwealth of Canada v. Canada, and in that ruling Justice Claire L’Heureux-Dubé commented:

If members of the public had no right whatsoever to distribute leaflets or engage in other expressive activity on government-owned property (except with permission), then therea would be little if any opportunity to exercise their rights of freedom of expression.  Only those with enough wealth to own land, or mass media facilities (whose ownership is largely concentrated), would be able to engage in free expression.  This would subvert achievement of the Charter’s basic purpose as identified by this Court, i.e., the free exchange of ideas, open debate of public affairs, the effective working of democratic institutions and the pursuit of knowledge and truth.  These eminent goals would be frustrated if for practical purposes, only the favoured few have any avenue to communicate with the public.

It’s been 19 years since the Ramsden case; I would encourage the City of Charlottetown to review this section of the Zoning and Development Bylaw with an eye to bringing it into line with the letter and spirit of the court’s ruling in that case.

(Fun fact: Chief Justice Bora Laskin, leading the court when Committee for the Commonwealth of Canada v. Canada was ruled upon, went to high school with my grandmother in Fort William, Ontario).

Halifax had an issue with this sometime in the past few years. No one seems to know their case law.

At our last Sustainability Committee meeting we started actively planning to promote and participate in a Walk [Your City] program for Charlottetown.

No way! Does it really not distinguish between public and private trees and rocks? Can you affix an address number to your house?

“SECTION 5 SIGN REGULATIONS
5.1 APPLICATION These Sign regulations Shall apply to all areas of the City, and no Person Shall Erect a Sign unless it is specifically permitted in this By-law and a permit has first been obtained therefor.
…

5.3 PLACEMENT STANDARDS
.1 No Person Shall Erect a Sign which is affixed to a fence, utility pole, tree, shrub, rock, or other
natural object.”

And so indeed it would appear that an address number affixed to the fence post of your front yard by means of a sign is prohibited per city regs—although this prohibition appears not to conform to the stated purpose of the regulations as specified in 5.2.1-4, and so you might prevail in court if you wanted to flout this one.

That said, I think it’s pretty common that what a statute or a regulation seems to prescribe and how it’s understood by the courts and the enforcers aren’t the same. I think this has something to do with legislation not being written by lawyers or people who can write necessarily.