Dan asked me if my IAXy can be used with WiFi. I said “no.” And it can’t, really: you need to plug it into a hard-wired Ethernet.

Which got me thinking about a product that would be a small device, not much bigger than a deck of cards, that would have an Ethernet port and enough guts inside to bridge that port to a nearby WiFi network.

It turns out that these things exist: this gizmo from Netgear is an example. It talks to your WiFi access point, and has an Ethernet jack. They pitch it as a device that can “[b]ring it all together — your PC, gaming console, Internet Radio, and wireless network.”

It also turns out that a plain old Apple iBook laptop can be used for the same thing using the OS X “Internet Sharing” feature (found under “System Preferences” and “Sharing”). If you select “Share your connection from: Airport” and then click “On Built-in Ethernet,” then you can plug other devices into the Ethernet port on the iBook and they’ll be “on the network.” 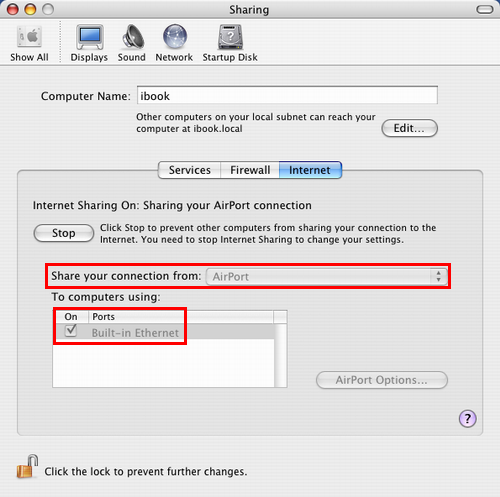 I just tried it — plugged my iMac into the Ethernet on the iBook — and it works. Neato. This means that, in theory, I could bring my iBook, my IAXy and a plain old telephone to the Formosa Tea House and run the entire operation from there. Perhaps I’ll try that tomorrow.

Well done, reinventing the mobile phone! I am stuck trying to get my zaptel to ‘make install’ — it won’t compile. The links to my kernel are not right, and I’ve tried about everything but still grinding away at it. I want my X100P card to work!

Update: things didn’t work as expected with my iBook, my IAXy and Internet Sharing. It seems to be a problem with the IAXy obtaining an IP address via DHCP from the iBook’s bootpd daemon: if I look in the Console, I see a “DHCP DISCOVER” entry, but no successful assigning of an IP, and the “everything’s okay” light on the IAXy never turns on. I don’t have this problem with plugging the IAXy into my NetGear wireless router, so I suspect the problem is related to incompatibility between the IAXy and Apple DHCP implementations.

Is there a software phone application to use with a mic & headphone plugged into PC to reach your Asterisk box.

Ken, you can use XLite, which is now available for PC, Mac and, in a new beta, Linux.

Much appreciated, just got Asterisk to run with my X100P and TDM400 cards up too! I just gave up and reloaded the system with RedHat 9 every time I goofed it up, and recompiled everything fresh. I now have two extensions, and one line out to the world.

Much more config to do, for example I get a CallerID related error when ringing in to the system.

I called one of my extensions from the other, that worked.
“Me, come here, I want you” to quote Bell.

Ken, I’ve been having callerID-related problems with my system too — I originally thought it was related to distinctive ring interference (I’ve read that this might be a problem), but I’ve since had the distinctive ring number removed, and I’m still not getting CID data passed. I continue to fiddle.

This adapter should bridge the Wi-Fi to your iaxy.