This is a mostly working hack that uses XSLT to transform the Plazes “traces” XML file into a format suitable for feeding to Google Maps. I used a variety of Google Maps hacking sites to help me put this together. Because Google hasn’t published an API for this feature, it all exists in a shadowing alley world; enjoy at your own risk.

The result, which you can see live here, looks like this: 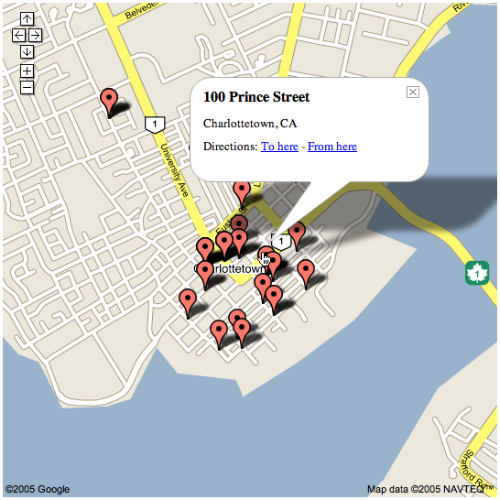 That’s a map, centred on Charlottetown, showing all of the Plazes that I’ve visited in the last 60 days. If you zoom way, way out, you’ll see additional Plazes in Montreal and Copenhagen too. Here are the building blocks:

I used TextXSLT on my Mac to transform the Plazes XML file using the XSLT file; there are a variety of other tools available for this, including the handy web-based W3C XSLT Service.

If you look at the source of the demo HTML file (substantially taken from Unofficial Google Maps Embedding How To), you’ll see it refers to “demo.xml,” which is where I saved the XML file that resulted from the transformation.

Notes on the result:

I can also imagine many ways in which this demo could be enhanced:

I welcome comments and suggestions for improvements and encourage others to build on this.

Looks like it is broken — the map image is not showing up?

Error: myMap.showSmallMapControl is not a function
Source File: http://ruk.ca/mapping/googlema…
Line: 28

Looks like this demo, code from which I used to create my hack, is inoperable as well. Looking at Google Maps this morning it’s obvious there’s been a code upgrade (the “Map / Satellite” link is *on* the map now, for example), so I suspect this is the culprit.

The demo app is working now, after some code changes detailed (albeit confusingly) here. Bonus: you can now toggle to satellite maps.

Nice one. I toyed with it and got it to work. Do you know if I can start map display in satellite mode? :)