I built a cool little app called PirateFox that knits together my two digital distractions of the moment, Firefox OS and PirateBox.

The app has a simple function: to share images, audio and video from a mobile phone to a nearby PirateBox. Firefox OS has an API called Web Activities than make this relatively easy to implement; it looks like this when it’s in action: 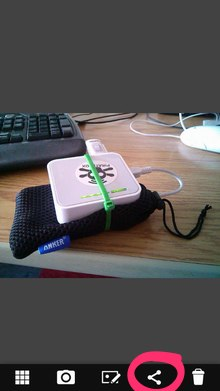 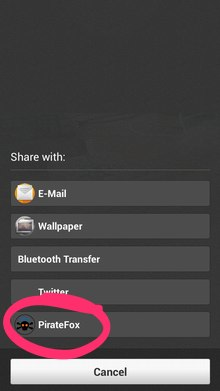 That’s a screen shot of my Firefox OS phone’s gallery app: I tap on the “share” icon and up pops a menu of sharing options, including, once my app is installed, “PirateFox.”  I tap PirateFox and the image gets automagically sent to the PirateBox I’m connected to.

You can grab the source for PirateFox and install it on your Firefox OS phone; if you don’t have a Firefox OS phone, you might look at the code anyway as an example of how to upload a file through a handcrafted XMLHttpRequest of multipart/form-data, something that works around an issue with the current version of Firefox OS that’s eventually going to be fixed.