This morning my alarm went off at 8:00 a.m. and I was out the door just before 9:00 a.m. hunting around for my olive harvesting compagni. They were nowhere to be found. After a few minutes of milling about, a very nice Italian man came around the corner and we managed to agree, he in Italian and me in English, that things were running late and we should just sit tight.

So that’s what we did, engaging in little snippets of conversation like “I have a place between Como and Milan and another place in Sardinia” (him) and “Prince Edward Island — yes, piccola isola… piccola isola” (me). By the time the rest of the crew converged 10 minutes later we were at the stage where I’d earned an introduction all-round as Peter dal Canada.

Although there are threats of 70 for the big harvest dinner tonight at Ristoranta Costa up the road in Nasino, the core olive picking crew numbered about two dozen. By 9:30 a.m. we had all re-rendezvoused near the pool, been assigned wicker baskets and yellow rakes, and the harvest had begun.

There are, it seems, three ways to harvest olives. 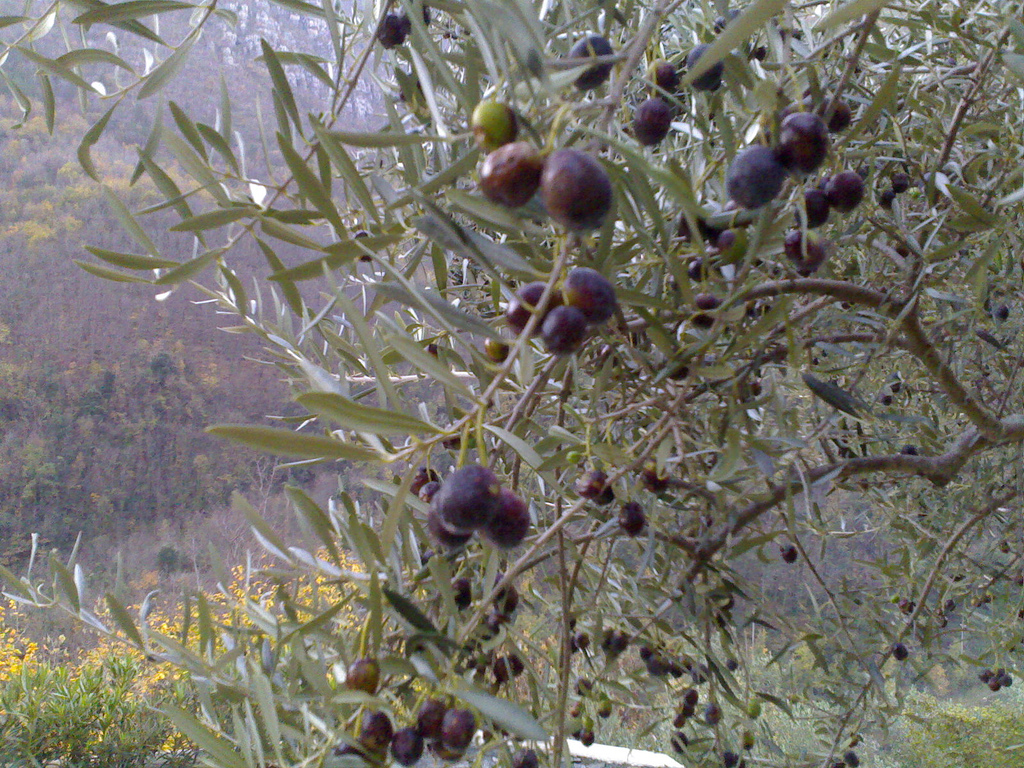 The first, and, to my mind, most kind to the olives, is to simply pick them as you would, say apples. They’re smaller than apples, of course, so you can often grab a whole handful in one go. In contrast to raspberry bushes, nettles and other things-you-can-pick, olive trees are pleasant to be around, you don’t need any gloves, and you appear to be able to pick for hours without suffering any great damage to the hands. 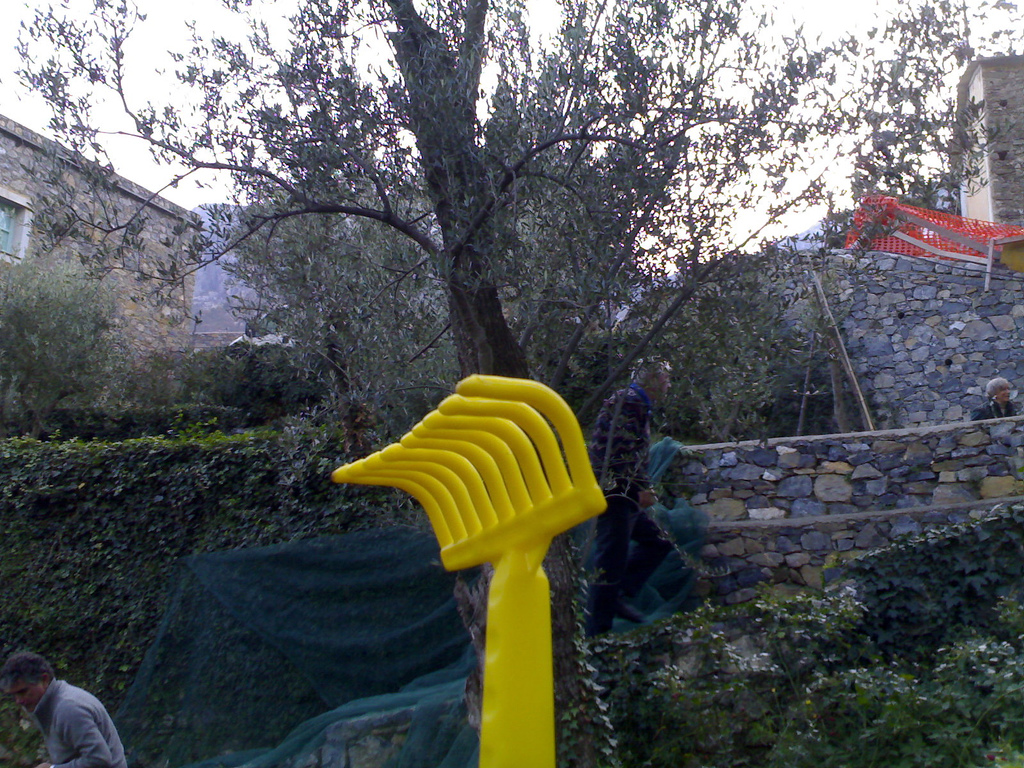 Competing with the hand-picking method is the “yellow rake” technique. These little rakes are made of plastic, and are about twice as big as a common garden trowel with tines spaced about an inch apart. The idea is that you brush said rakes through the branches of the trees, pluck off the olives, and leave them either in your basket (if you’re good) or on the ground, where they fall onto a net and can be gathered up later.

While theoretically more advanced, the yellow rake seems mostly to pluck off branches and leaves, with the olives remaining on the trees. While they have a unique ability, when stuck on the end of a bamboo pole, to reach otherwise unreachable olives, I quickly jettisoned mine.

The final technique could best be called “bashing high branches with a bamboo pole so that the olives fall off.” Several veterans of earlier olive harvests were very wedded to this approach, and very good at pulling it off. Success demands a rather frenzied bashing style, and good netting coverage down below so your efforts aren’t for nought.

Early off the mark I was identified as one of the hallowed alto (tall) pickers, and was given special assignments and a ladder and sent to places others dare not tread. I attached myself to the Italian friend I’d met earlier, and his wife and daughter, and we worked the same trees throughout the morning. By mid-morning we were humming along at a very comfortable pace. 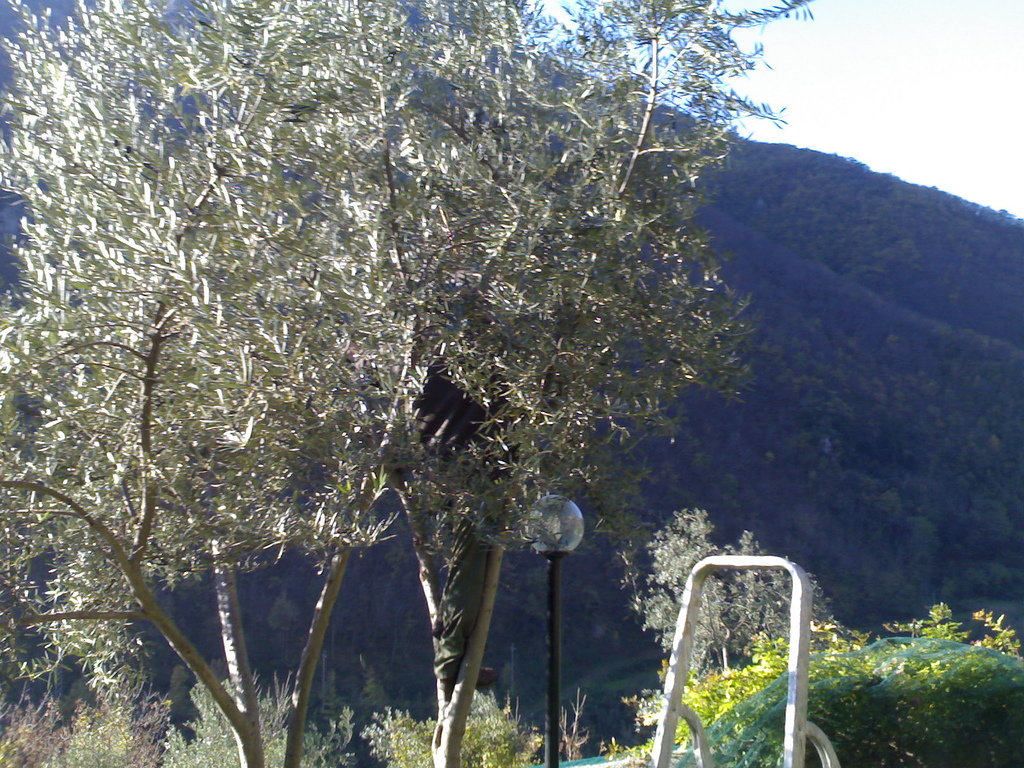 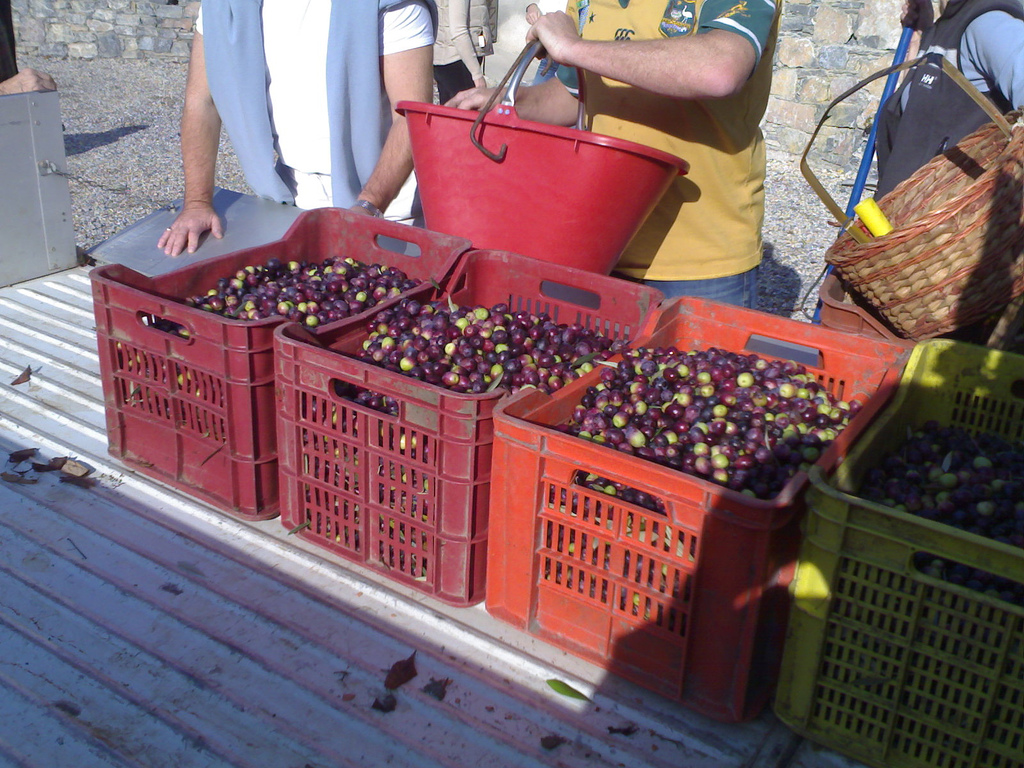 Now as my brothers and parents will tell you (to say nothing of Catherine), I’m not a big one for the “manual labour” and will generally shirk any opportunity for same if I can finagle a way. So you’d think that volunteering for labour would be the last thing I’d do.

But I soon found that labour that is, as I wrote yesterday, sforzo collettivo per compiere un’opera di interesse comune — “collective effort in order to complete a work of common interest” has its perks. There’s the whole “camaraderie” thing, something made more piquante by the multinational nature of our force — Italians, Irish, Americans, English and me, the sole Canadian. And then there’s the eating.

If today’s experience can be used as a gauge, it’s important to spend an equal amount of time during the olive harvest eating and drinking and chatting as it is actually up in the trees. Around noon, after a good two hours of picking, we gathered up the nets and the rakes and the olives and loaded them into the truck and convened on the pool deck for an excellent buffet of salami and cheese sandwiches, spaghetti with garlic and oil, wine, bread and ice cream. 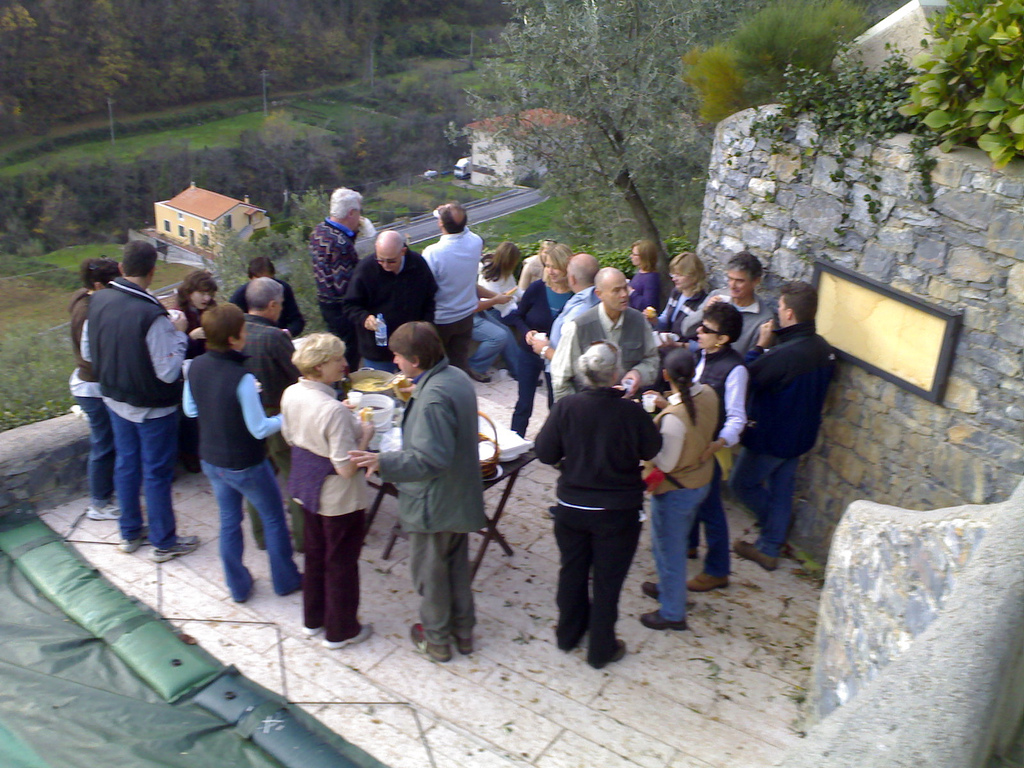 There’s nothing like a good bowl of spaghetti by the pool in the crisp fall air after you’ve been up in trees all morning.

Over lunch I got to meet Coleman and Katie from Ireland, Colin from Brighton, Jack from San Diego and Francesco from Italy. Francesco speaks about three words of English, but he has bon ami that more than compensates, and made a point of making sure that I understood the heavy schedule of eating and drinking that is to follow (it’s not only dinner to night, but lunch tomorrow and dinner again tomorrow night).

After a brief post-lunch break, we reassembled in the piazza at 2:00 p.m. (a due, as Francesco emphatically told me) — our numbers now cut down by about a half — and walked over by the Colleta church where we harvested a group of a dozen trees on the terraces there. Some of these trees were hanging out over the terraces and so the aforementioned “crazy bashing” technique was called into action while Francesco and I scurried about in the mud below spreading out a net. 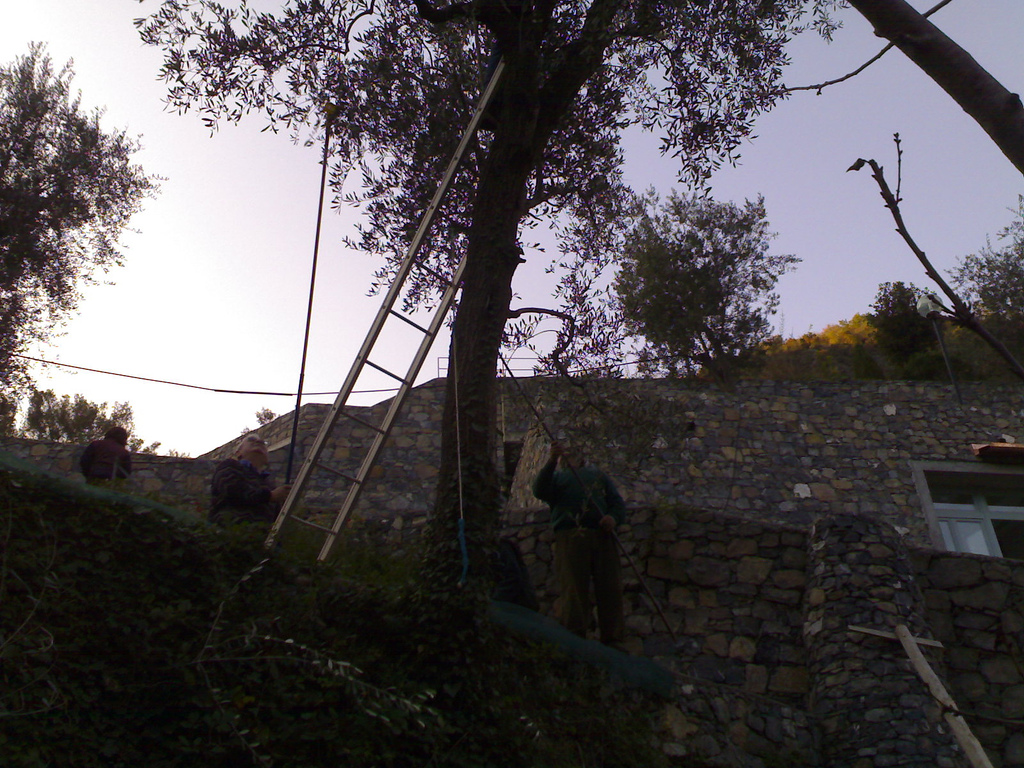 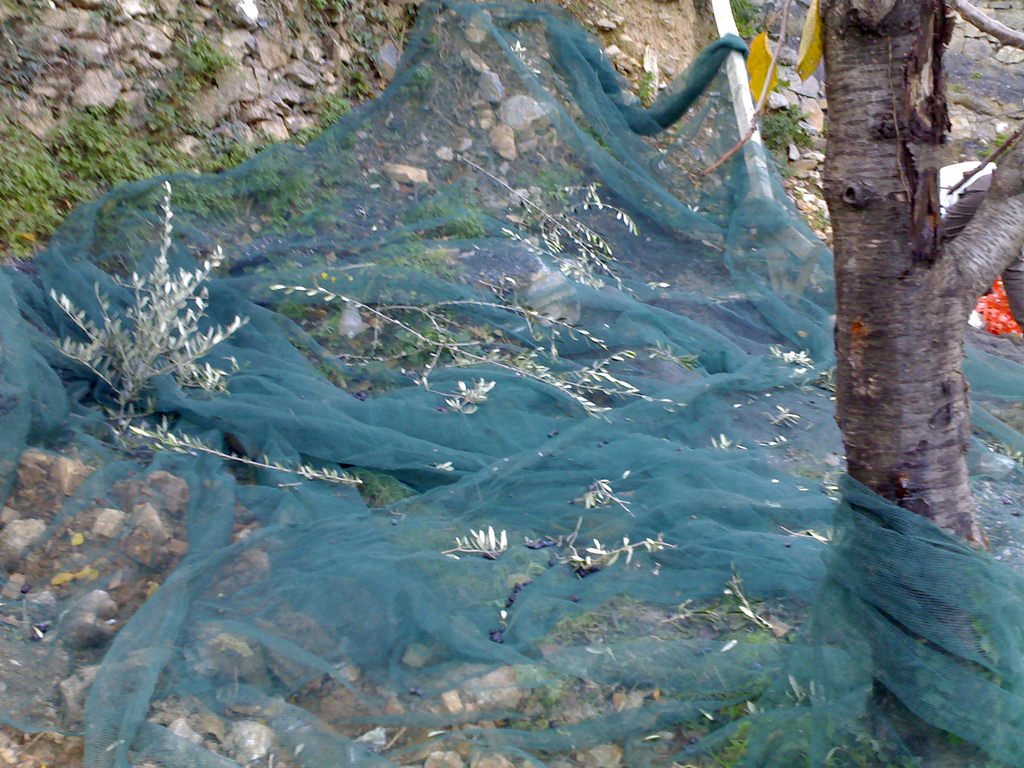 On the agenda for tomorrow, if I understood correctly, is some additional olive picking followed by a trip back to Nasino to Frantoio da Olive Armando Garello to turn olives into olive oil. Which, goes the theory, they should be by this time tomorrow.

What a wonderful day.

Wow — That sounds like a fun day and heck, who else has gotten to participate in a sforzo collettivo per compiere un

Sounds like a really good time! But as for the techniques, couldn’t you use a monster garagian nut-shaker :-)?

Ah, the dignity of manual labor.
Thanks for the report on the olive harvest. Can I sign you up for the Cuban sugar cane cutting next August?