Every year at the New Year’s Day Levees here in Charlottetown (see reports for 2004, 2005 and 2006), our day ends with the Premier’s Levee at the Confederation Centre of the Arts.

And every year Provincial Photographer Brian Simpson is at the end of the receiving line, taking pictures of each visitors shaking hands with the Premier.

The miraculous part of this endeavour is that no effort is made to attach the person being photographed to a name or address, yet somehow the photographs make their way by mail, over the course of the year, to the homes of those pictured. I suspect that there is an entire secret department of government devoted to photographic analysis and address matching. 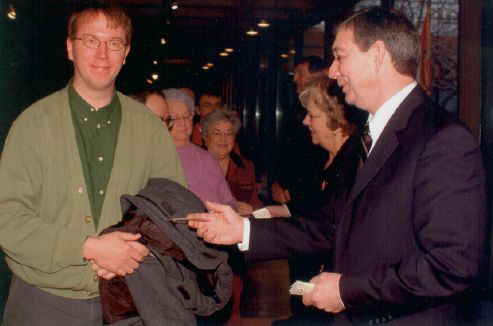 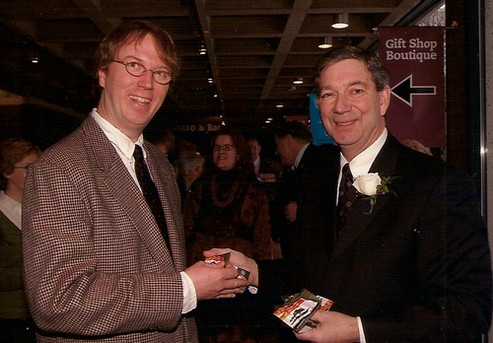 Besides the Premier’s moved from a striped tie to one with a diamond pattern, notice that my degree of sartorial splendour shot through the roof; indeed this is one of the rare photos of me, outside of a wedding environment, wearing jacket and tie. I also seem to be a lot happier in 2005, and I seem to have much better Premier interaction. I also seem to be very, very tall, something I’m not usually conscious of. Oh, and I think I was 10 pounds heavier in 2005 too.

Eagle-eyed readers will note that Catherine is looking resplendent in the background of the 2005 photo.