First, I’ve been having Google surveil me for many years via Google Location History, wherein I give the Google Maps app on my phone permission to drop digital breadcrumbs to Google as I move about the world.

For most of the last three weeks my timeline looks like this: 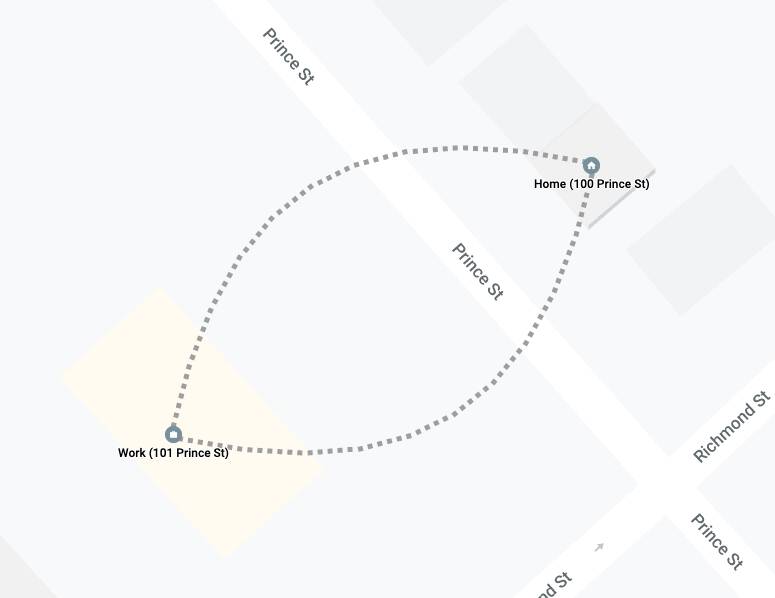 Mostly this surveillance is of casual interest, but it also means that if, say, it was announced that someone carrying the coronavirus was somewhere I might have been, I have a way of confirming or denying that. Never has where and when I’ve visited been of more potential health value than now.

Second, I’ve turned on the motion detecting features of our Ring video doorbell.

When I installed the Ring last August, it was primarily to allow me to miss fewer courier deliveries (at the time we were getting regular deliveries of cancer meds that required a signature); it seemed like an innocuous enough piece of of technology, with the greatest civil liberties assault being to those that rang the doorbell.

Since that time Ring has evolved into becoming part of a burgeoning police state, and my discomfort with the technology has grown; But, for the time-being, police state actor or not, the Ring has proved helpful. Here’s what it looks like to set up “motion zones” in the mobile app:

The idea is that I want to be alerted when something moves in our front vestibule, but not when someone walks by on the sidewalk. This turns out to work frightfully well, with no false-positives at all over the last two weeks.

The end result is that whenever someone enters our vestibule, I get an alert on my phone and on my computer, and I can watch an instant replay of what happened.

Here’s me leaving the house at 10:48 a.m. this morning, jaywalking across Prince Street, and walking into the St. Paul’s Parish Hall:

Being able to know what’s going on in my vestibule has proved useful mostly because I know when things get dropped off or picked up, our vestibule serving as a kind of DMZ or airlock during these infective times. So today when the Receiver Coffee delivery of bread and meals gets dropped off, I’ll get a ping on my phone and I’ll know to run over to put things in the freezer.

Both of these “personal” surveillances have dark sides (“WTF, the Internet has video of me dropping off your bread?!”, a kindly Receiver staffer might justly ask; to say nothing of the “according to anonymous cell phone data” that seems to be part of every second story in the New York Times this week), and the darkness extends, at least in part, because the data that’s being vacuumed up sits both under my control and well beyond it.

So I’m actively developing alternatives: I’ve got the parts here in my office to build an alternative doorbell that doesn’t stream video into the repository of the surveillance industrial complex, and I’m experimenting with using PhoneTrack on my phone and my Nextcloud instance to drop my geolocation breadcrumbs to myself, not to Google. I’ll report back as these projects progress.