Update: As of summer 2017, many of the materials formerly in the Provincial Autism Lending Library have been integrated into the Provincial Library System. These are in the process of being added to the catalogue, and are or will shortly be available for searching here.

Last month I had occasion to learn that the Department of Education, Early Learning and Culture maintains an autism resource library in the Arsenault Building here in Charlottetown.

I’ve been the father of a child with autism for 16 years, so you’d have thought I would have known about this before now, but it’s a cleverly hidden resource, the only reference to it on the province’s website coming in a brief mention on page 6 of the Autism Funding Guidelines:

If additional materials are required, the parent is encouraged to borrow materials from the Autism Lending Library. The library can be accessed by calling 368-6513 or the Autism Consultant at the school board. Non-consumable materials must be returned to the library once the child has finished with them to be available for other children

Once I found out about the library, I called to find out how I could search its catalogue, and was told there there is no public catalogue, but that I was free to identify resources and a local database search could be done to see if they could be located.

As someone with a strong belief in the power of public library catalogues as one of the integral public faces of a collection, this dismayed me, and so I began the process of trying to advocate for the creation of such a catalogue.

This morning, on the way to school, Oliver and I had a few minutes to spare, so we decided to drop into the Arsenault Building to visit the catalogue for ourselves, and to return a book that Oliver’s autism consultant borrowed on our behalf. The person responsible for the library kindly loaned us a set of keys and helpfully set us off on our way to the basement to find it. 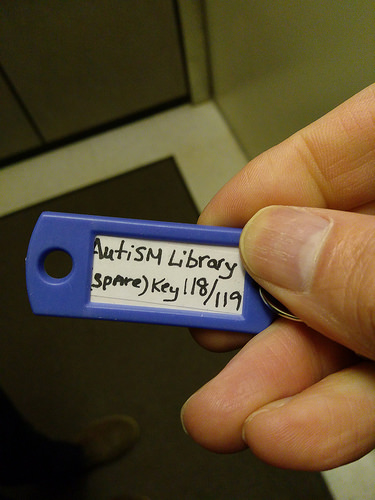 The library shares a corner of the Arsenault Building basement with the Early Childhood Education Library and it was that library we let ourselves into first, by mistake. In that room we found a computer with a sticky note on it titled “Koha Library Log In”:

Koha is the open source library catalogue system that Prince Edward Island school library use, so I had cause to hope that perhaps there already was a public catalog for the autism collection, but that it simply wasn’t widely known about. When I got back to my office I visited the main PEI School Library Catalogue site, and, sure enough, below Athena Consolidated and above Belfast Consolidated was a selection for Autism Library:

Which led me to the PEI Autism Lending Library’s public catalogue. Woohoo!

The collection is small, but broad, and there were many resources I saw in our brief breeze through that I’ll return later to borrow. There are books about anxiety, sexuality, school and work, to name but four.

Support services and resources for people with autism and their families are in woefully short supply in Prince Edward Island; the very least we can do is to shout from the rooftops about the resources that we do have, and this library, and its catalogue, is something that everyone should know about. Spread the word!

(By the way, there’s a public catalogue for the Early Childhood Education Library too).

Be warned that although Koha has provision for it, the circulation module appears not to be in use, so whether or not any given resource has been checked out or not may not be accurately reflected in the catalogue.

In addition to the province’s collection of resources, Stars for Life Foundation also has a small lending library of materials available to people with autism and their support network in its house on Maypoint Road.

To access the Stars for Life collection, visit the house during office hours (you can call ahead to confirm); the resource library is in the basement day program area; enter from the parking lot and go to the end of the hall and downstairs and talk to the receptionist, who will point the way. 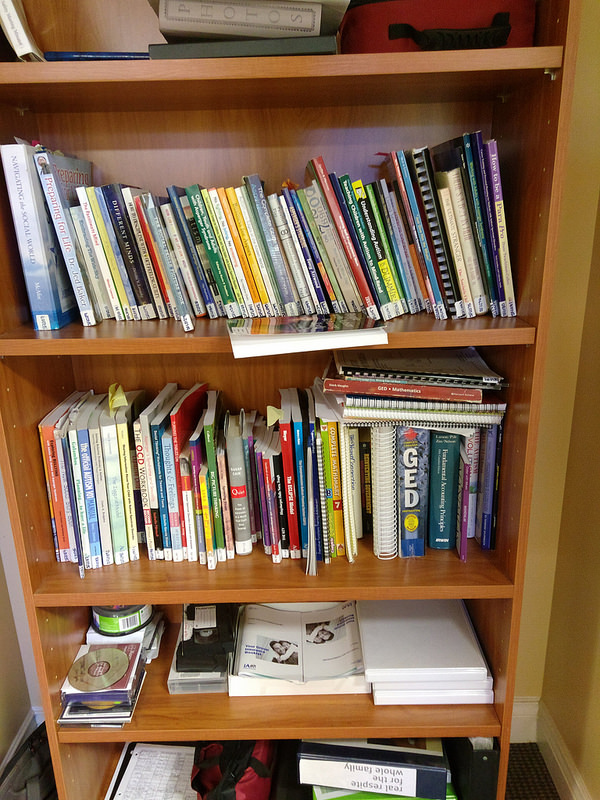 Stars for Life’s collection has no public catalogue, but as I recently joined the board of the foundation, I’m in a position to help do something about that.

My hope is that, in short order, we can have a union catalogue of autism resources available from many different sources of PEI; stay tuned.