In Aniane, as elsewhere in France, there is a problem with dog owners letting their dogs shit where they like — streets, sidewalks, alleys — and then just leaving said shit there for others to avoid or, if unlucky, drive over or step in.

There is a campaign here in Aniane, however, to change dog owner behaviour. From the look of the streets it is not a terrifically successful campaign, but perhaps we’ve caught it early.

School children are on the front lines of this campaign; here’s a random selection of their poster are against crottes: 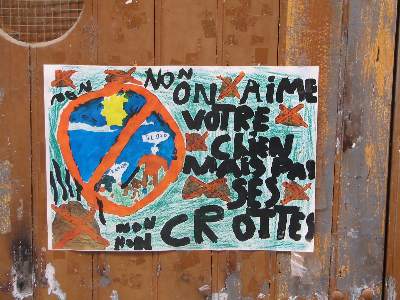 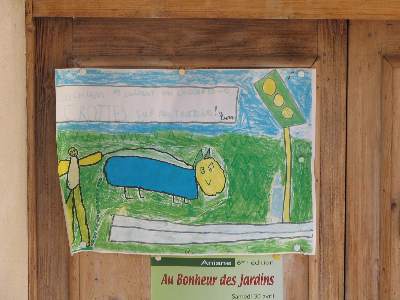 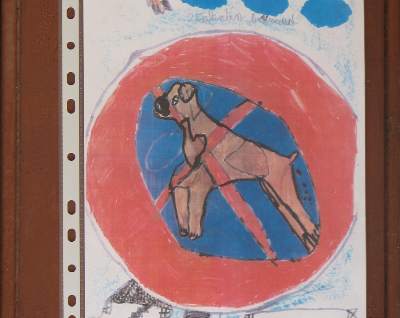 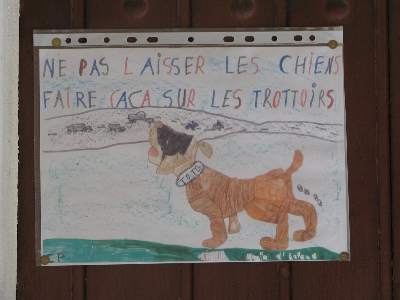 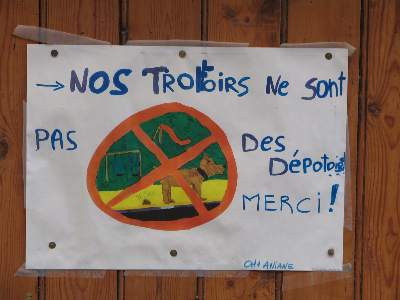 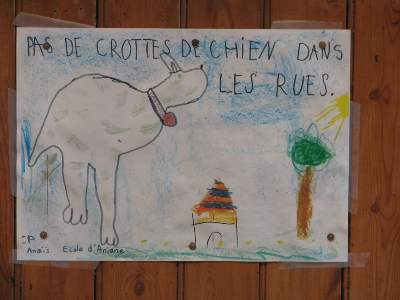 When I was in Paris a few years ago, they had motorcycles (green municipal style) with Vacuum hose, which conveniently clipped onto the front wheel fork on one side. They went from crotte to crotte sucking them up into the vacuum. Also, the trottoirs were cleaned daily with a high pressure hose. Even so, one needed good shit radar at all times, or else, splat!

In Budapest, dogs are allowed on buses, subways, and in restaurants. There’s also a campaign against poop, but you still have to watch out. And it’s considered very rude (more so than in Canada) to leave your shoes on when you enter someone’s home. Are the two related? Probably.

Puenta Perula (Mx) has a wonderful beach and several RV parks that attract people who really like to get away from everything — the town has about fifty inhabitants.

A week before we settled into the “Red Snapper RV Park” there was a rather serious doggie doo incident. (We were filled in on details more than a month later by someone who was there at the time.) It bears mentioning that the Mexican army have many checkpoints where vechicles are searched for guns and drugs.

The story goes that an RV from Texas set up next to another from BC. The Texan was not into controlling his dog which resulted in the BC traveler scooping, where the Texan should have, and depositing the results near the Texan’s RV.

I didn’t get many details except that the Texan pulled out a gun, fired into the air, and informed the (I’m sure, surprised) Canadian that the next bullet would go through him if he continued to object to the dog’s doo.

Sadly this story (confirmed by two sources) is not surprising based on what we experienced with American RVers in Mx; not that they all pull guns (we never saw anything of that sort) but the most obnoxious examples of behaviour and rudeness seemed frequently to come from Americans. Regardless many Americans we met were perfectly wonderful folk.

On the other hand, I saw exactly one drunk Mexican over two months of travel and found that the Quebecois we encountered distinguish themselves, predominently, by their courtesy and jois de vive.