While we were in Japan over the last two weeks I was using a rented HTC Evo from Global Advanced Communications. While the customer service from the company was excellent — the phone was waiting at the desk of my hotel when we arrived, as promised, and was all ready to go — the phone itself was a klunky older model, very bug-prone (apps, especially Google Maps, crashed regularly; keyboard input was difficult) and the promised “max 40 Mbps” of throughput via WiMAX never amounted to much more than 1 Mbps. And the battery was incapable of supporting a full day’s worth of use (fortunately a spare battery was included, which I needed to use from about 4:00 p.m. onward every day).

But it did the job, had a good camera (see the results in Flickr), and, being an Android phone, was dead-simple to connect to my existing Google ecosystem.  Including Google Latitude. Which means that we have a very nice set of digital breadcrumbs of our trip. Here’s our footprint in Japan over 13 days: 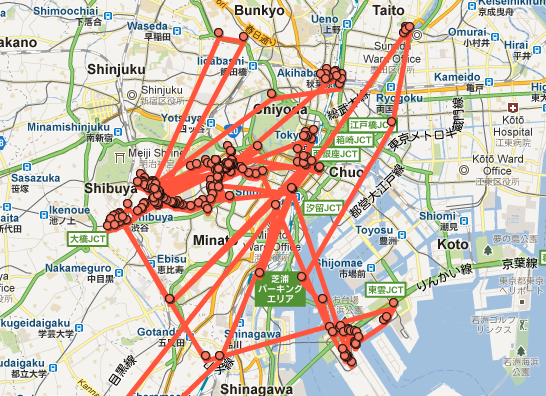 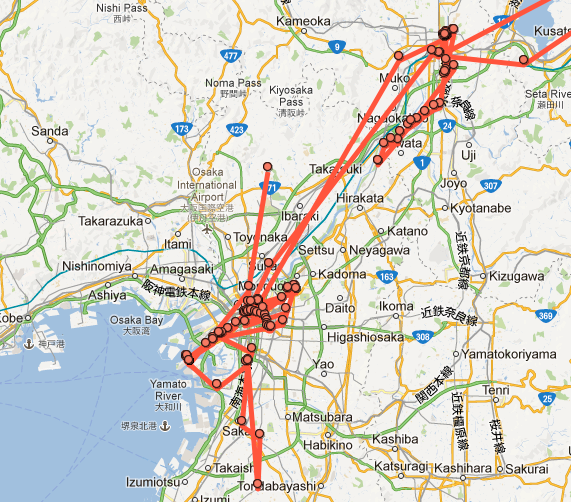 It’s all frightfully accurate, and thus useful for tracking down “when exacting did we eat lunch at Bird?” or “where was that little gallery we visited?” Here’s that lunch at Bird, for example, on Monday morning before we left Osaka (it’s in PEI time; Osaka time was 12 hours ahead, so it was just before 2:00 p.m. on Monday): 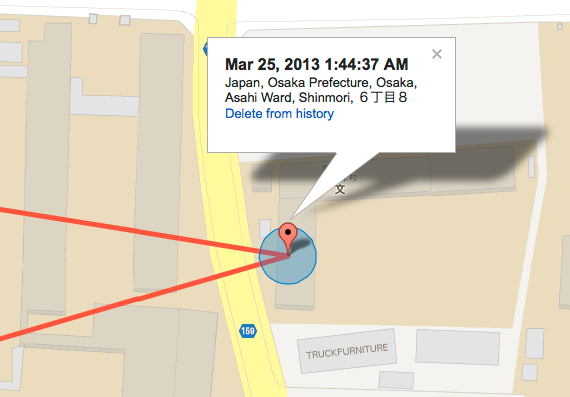 One of the projects I plan to carry out during my Hacker in Residence project at UPEI is a mechanism for slurping in geopresence for a variety of sources into a “personal geopresence archive.” Google Latitude, along with Foursquare, Twitter, Plazes, and other sources will be the target data sources, and this Japanese trip gives me a nice place to start.