Over 13 days in Japan Oliver and I got to experience an incredibly child-focused country. Between children’s museums and science museums and neighbourhood children’s centres, it’s obvious that Japan cares about its children and invests a lot of money and effort in creating facilities to entertain, educate and enliven them. Here are our favourites in Tokyo.

This was our first stop on our first full day in Tokyo and we spent 6 hours there. It’s a stunning building in the futuristic Odaiba district, and it’s filled with interactive exhibits about science, nature and astronomy. We particularly enjoyed the 3D dome-theatre trip through the universe (included in the ticket price and available with English translation via headset), the robots, and the display of electronic artworks. Much of the interpretation is in both English and Japanese, and the staff were able to help us in English most of the time. There’s a nice café on the upper level that’s very child-friendly. 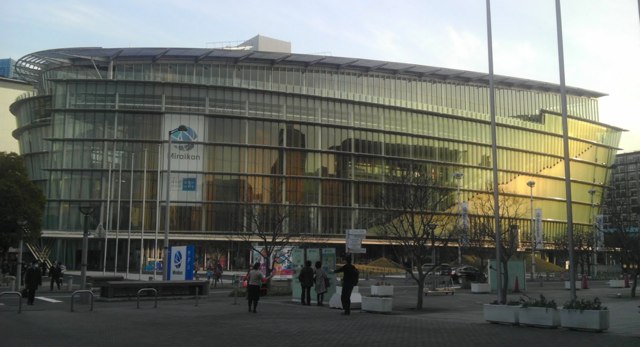 By fortunate chance, this museum of design was hosting a child-focused exhibition called Design Ah! during our visit, and we spent two hours experiencing it with a gaggle of Japanese families on Saturday morning. The museum building is intriguing: mostly underground, at the edge of a park, and filled with twists and turns. 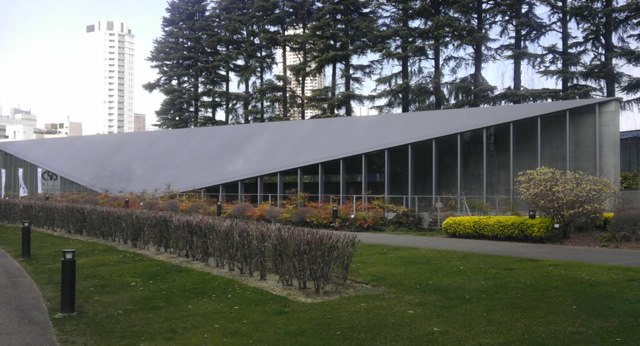 The Design Ah! exhibit was truly amazing: an introduction to design for children that involved both interactive activities – learning how to fold fabric into a holder for books, paper folding, coin rubbing – as well as intriguing deconstructions of things like a soy sauce decanter and a public school. There was music and video and stunning visuals. 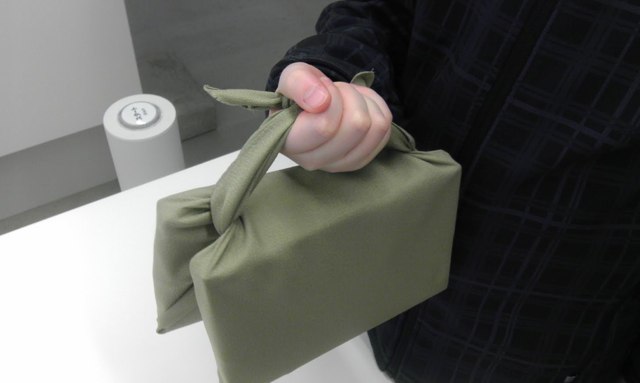 By far the most interesting exhibit of the show was a Kinect-driven machine that took movement and translated it into Japanese language characters; hard to describe, but this video does it justice:

There was also a pretty fantastic 360 degree video room teaching kids about numbers, colours and shapes; here’s a clip from the “counting” section:

The Tokyo Midtown development is right across the park, and there are plenty of places to eat and drink there (there’s not-too-bad coffee in the Dean & Deluca café in the basement and a nice French bakery on the main floor).

If Miraikan is the flashy new kid on the science museum block, the longstanding workhorse is the Tokyo Science Museum. Very much in the classic Exploratorium model it turned out to be an unexpected gem, perhaps because it has been able to resist the corporatizing and infotainment tendencies that have afflicted museums like the Ontario Science Centre in recent years.

There were several highlights here, but the big one was Oliver’s starring in the demonstration of liquid nitrogen in the science show in the “Workshop” area of the museum, ably guided by Mr. Hamashi, who was perhaps the best science communicator I’ve ever enountered:

The area devoted to an exploration of mechanics was also particularly well-done, with a bunch of activities involving moving big metal balls around. There’s no better way to understand mechanical principles – levers, inclined planes, pulleys – than experiencing it all physically, and the mechanics exhibits did this very well: 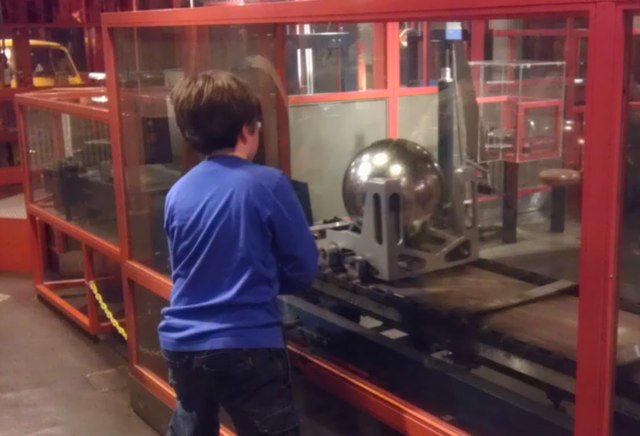 Also worthy of note was an entire wing of the museum devoted to the northern lights. In a dozen exhibits there was discussion of the sound, light and electricity of aurora borealis with a depth that I’d never seen elsewhere. 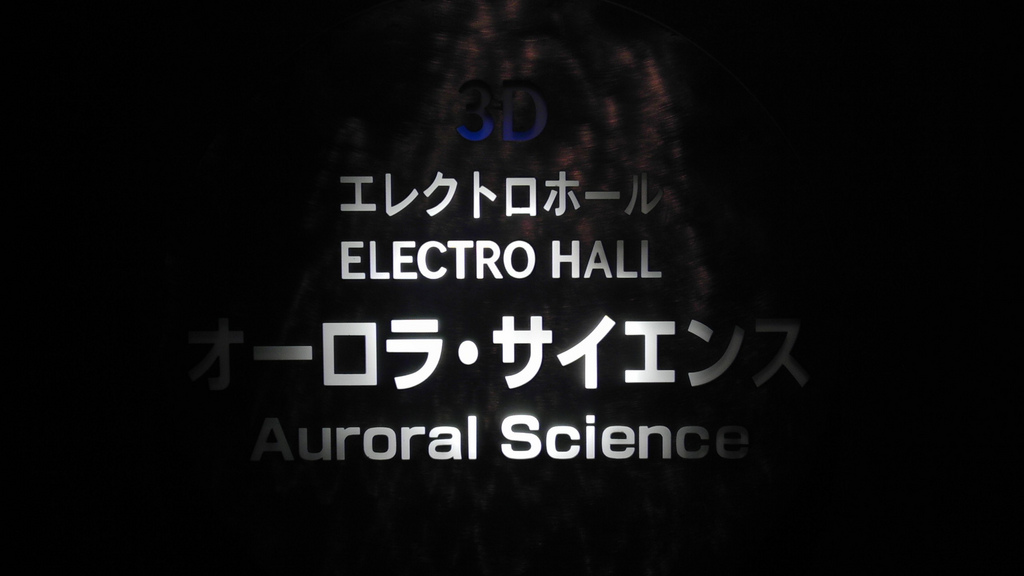 There’s not much English in the museum, although we were helpfully given an English-language map and guide on arrival. There’s a tiny café with two seeminly-competing vendors offered rice and noodle dishes; you’re on your own to figure our what’s what. The museum is on the edge of a very pleasant park that makes for a nice walk to and from the metro station.

Admitedly a niche museum, but a good one nonetheless. Located in the basement of the Toppan Printing company, the museum provides a good overview of printing and communication from pre-Gutenberg through the digital age. While there are some interactive elements, most of the exhibits are more classically “museum-like,” the notable exceptions being a good introduction to wood block printing using a classic Japanese image deconstructed into its individual plates, and an exhibit where you can use rubber stamps and different coloured inks to assemble a calendar on a postcard. 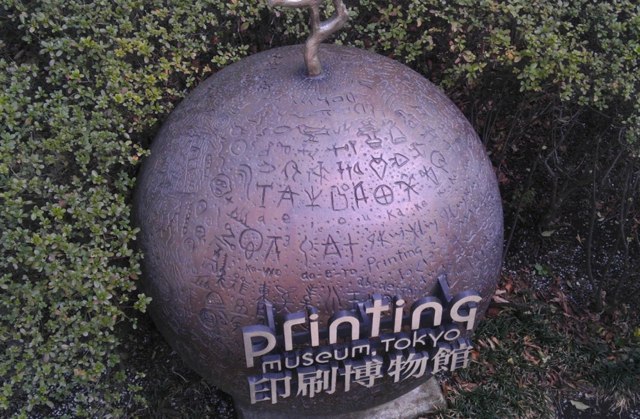 The really great thing about the Printing Museum, however, is the workshop area where printers provide a hands-on introduction to letterpress printing. This was initially a little frustrating for Oliver as it was conducted entirely in Japanese (it was mostly lost on me too, although many of the concepts were familiar). But once we got an opportunity to actually print, things took a turn for the better.  We had a chance to print on a Gutenberg-style press, and then to make some business-card-sized prints on an Adana Eight Five (my first press; they have a nice collection of about a dozen of them for larger workshops). 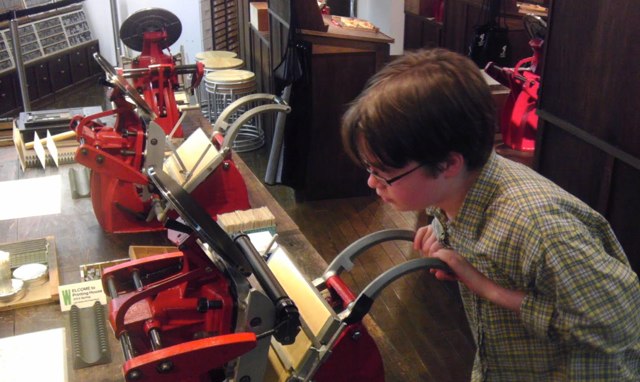 The museum is a little off the beaten track, and there’s no much around restaurant-wise, but it’s easily reached by a couple of metro lines.

This might have been our favourite place of all, partly because it was lots of fun, and partly because it demonstrated such a strong commitment to child welfare: in one building is a gym, a pool, an art studio, a music studio, a video library (with viewing pods), a play hall, a homework room, a computer lab, a roof garden filled with tricycles, and a child development and wellness centre.

It’s an “all you can eat for one price” place: you pay $4 for kids and $6 for adults and then everything is available to you. We started our visit in the art studio where there was a pre-planned craft activity, making a whirlygig. The instructions were provided in Japanese by an animated and patient instructor, and after 20 minutes of cutting and pasting and gluing and colouring we had ours made: 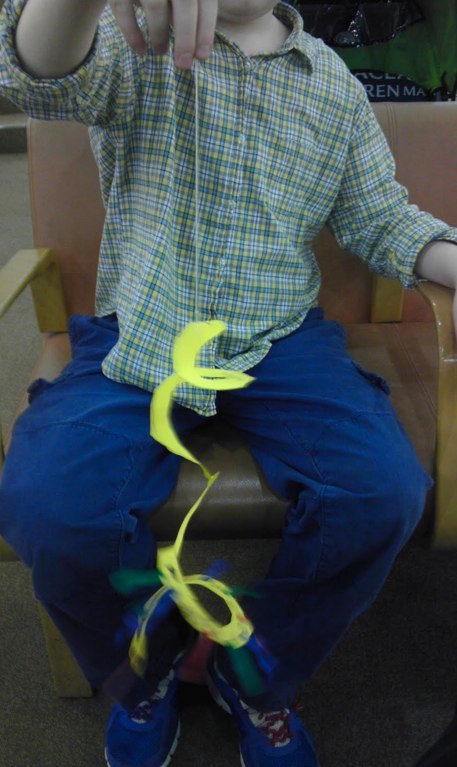 From there it was up an outdoor twisty-turny exercise track with stations every once in a while with things like hoola hoops and stilts, up to the fifth floor rooftop garden where Oliver had much fun racing around on a hand-operated tricycle:

The view from the fifth floor rooftop is pretty neat too: 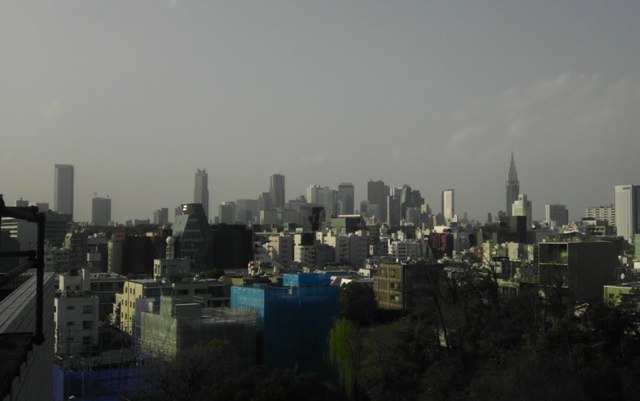 Next it was back down to the fourth floor to the music studio, where they had every manner of musical instrument available for playing: 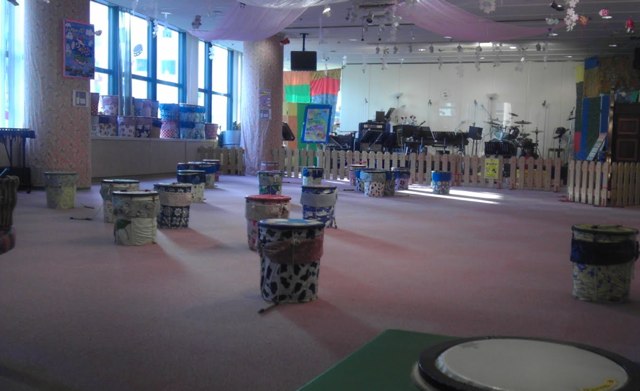 We had a lot of fun playing the xylophones:

A quick turn through the video library – 20,000 tapes and DVDs and about a dozen little rooms with players for watching them – and we were off, having spent a couple of hours having a lot of fun. I can imagine that if we lived in Tokyo, especially when Oliver was little, we’d have spent a lot of time here.

There’s a café on the first floor, but there are also lots of places to eat in the Omotesando neighbourhood where the castle is based.

The simply fact of being in Tokyo itself is enough to entertain and delight anyone for weeks on end. Between conveyor belt sushi (Pintokona was our favourite) and the metro and the coffee shops and the parks and just walking around the crazy bright-lit streets, I can’t imagine any child being bored in Tokyo. Nor, indeed, any adult.

Next up: Kyoto and Osaka.