When I was booking my trip to Ottawa for this weekend, several factors conspired to make it sensible to fly to Montreal first: the barrier between the Aeroplan 15,000 and 25,000 mile reward levels, the opportunity to see Montreal family, and a curiousity-driven desire to always take the road more complexly traveled.

All of which resulted in me taking VIA Rail’s Business Class back from Ottawa to Dorval last night.

On the way up from Montreal on Friday I’d been in the regular Economy class, as the price difference between the two classes then was more than $100. But for yesterday’s train the $66 fare was only $16 more than economy.

It was a thoroughly enjoyable experience.

Ottawa’s train station is inconveniently located some distance from downtown–its original Union Station was conveniently across from the Parliament buildings, but it fell victim to urban renewal in 1966. It’s a just 20 minute ride to the station on the OC Transpo bus, so it’s not particularly arduous to get to.

I arrived characteristically early for my 6:30 p.m. train at 5:00 p.m., both because I had little else to do, and because I could relax in the Business Lounge in the station.

The station was deserted when I arrived, in part due my earliness, and in part, I expect, because all VIA’s trains to and from Toronto were cancelled for the rest of the day due a freight derailment outside of Kingston.

When I entered the glass sliding doors of the Business Lounge it too was deserted, and so I cannot write about the check-in procedures there as I was not subject to them (a few minutes later I ran into the lounge attendant while I was getting tea and she said “you’re going to Montreal?” and I replied “Yes!” and that was it).

The Business Lounge was not life-changing in the “allow us to custom-tailor a taco based on your chakras” style. But the chairs were comfortable, there was a Saturday Globe and Mail to read (prohibitively expensive on PEI so something I never read otherwise), crisp Granny Smith apples and a nice peppermint tea. I busied myself with catching up on email, listening to music, and trying not to stare at Gilles Duceppe as he entered the lounge with his posse and sat directly in front of me.

At 5:45 p.m. came the call to pre-board the train (marking another stage in my ever-higher ascendance), and after a short walk through the underground tunnels I was comfortably seated in seat 7S, a single seat, rear-facing, with ample room to stow my gear above and to the side.

The seat had a regular power outlet, and a tiny laptop-width shelf to the left, and so enough room to get all my devices charging. There was remarkable-easy-to-connect-to wifi with no need to authenticate other than entering the train number.

Onboard service started soon after we left the station: the drink cart came around and offered a selection of soft drinks, hard drinks and wine (I had a glass of red wine). Shortly thereafter we were offered a hot towel, and after about 15 minutes airline-style meals. Mine, because, apparently, I remembered to sign up for a vegetarian meal years ago when I enrolled in VIA’s loyalty program, was a vegetarian ravioli with cheese and spinach served with an olive bun. It was hot and tasty. Midway through eating, the drink cart rolled by again and I asked for a “tiny splash of red wine” and the porter filled my plastic cup almost to the brim. Which makes me think, apropos of Le Pure Café, that I should not interject lingual fancy into my wine ordering; it never goes well.

By the time I’d eaten, finished my gallons of wine, and written a difficult blog post, we were 5 minutes from Dorval and I quickly packed up my gear in preparation for disembarkation.

The front desk staff at the Aloft hotel where I’m staying assured me on the telephone that I could walk from the station to the hotel in 5 minutes. This proved to be inaccurate.

To walk from the VIA Dorval station to the Aloft hotel, I:

It’s always struck me as odd that the intermodal connection between VIA and Trudeau Airport is as clunky as it is given their proximity, but at least there’s a shuttle than runs between the two; the airport hotel shuttles don’t stop at the VIA station, meaning that if I’d wanted to avoid the treacherous ice-stairs I would have to take the VIA shuttle to the airport, then wait for the hotel shuttle from the airport.

Here’s a view of the VIA Rail Dorval station from my Aloft Hotel window, 456 metres and half a world away: 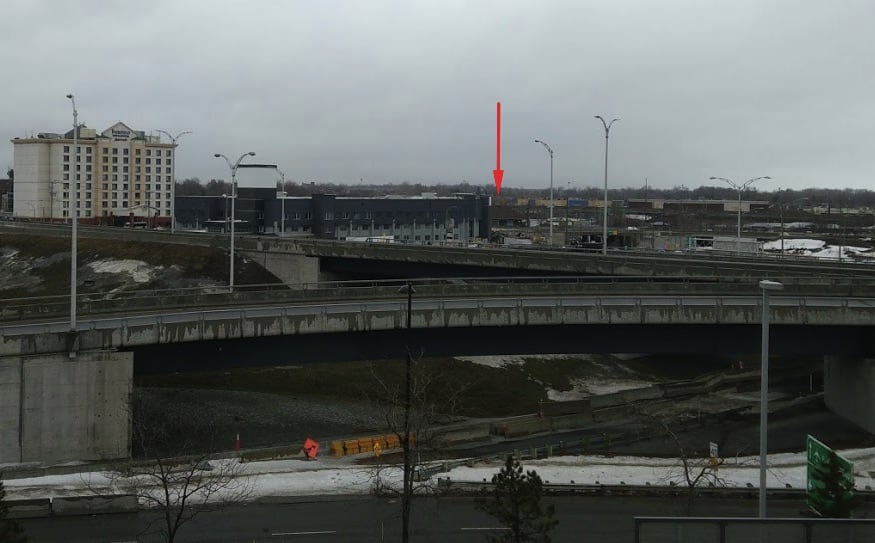 And here are the route of my walk traced on a Google Maps satellite view: 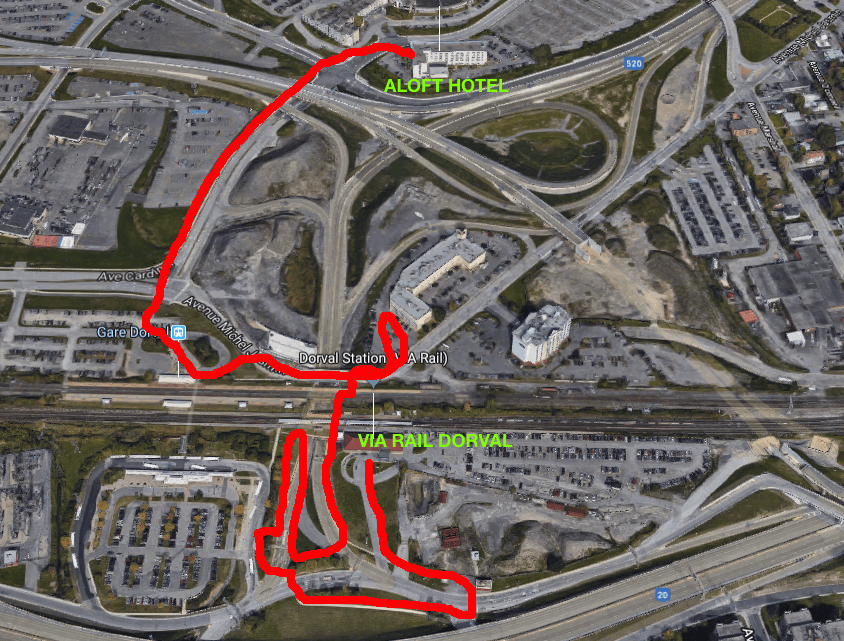 But I made it.

And a comfortable bed was waiting for me in the hotel.

they obviously do not want people to walk.