Earlier this summer Grace Kimpinski, the Executive Director of Island Fringe, got in touch with an idea for a new award for this year’s edition of the festival, and asked if I’d be willing to sponsor it. I said yes immediately, and together Grace and I cooked up the name of the award and the spirit in which it will be awarded.

Longtime readers will recall that in October 1882 Oscar Wilde paid a visit to Charlottetown as part of his speaking tour of North America: 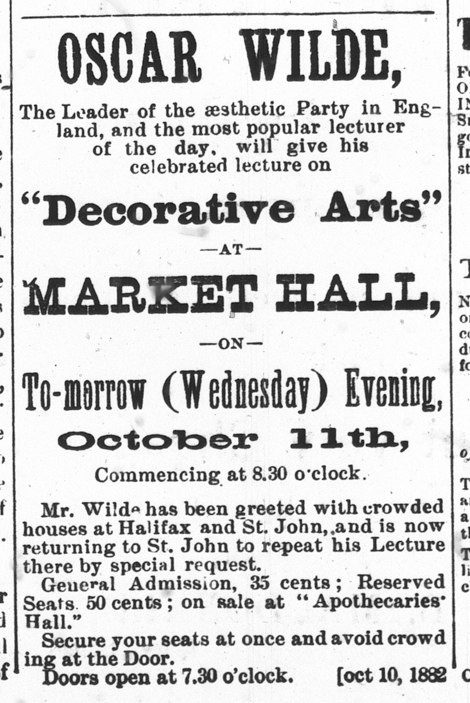 Since I first learned of that visit, from Catherine Hennessey, it has stuck in my head as something we should celebrate, if only because the very idea of Oscar Wilde in Charlottetown’s Market Hall, speaking about “Decorative Arts” is just too amazing a vision to not celebrate.

Wilde was just 28 years old when he visited; he died at 46, spending two of the years between imprisoned for being gay (a crime for which he was posthumously pardoned only in 2017).

It seemed only right, given that Island Fringe celebrates “boundary-pushing theatre and live performance,” that the award should be named in Wilde’s honour, and given out to the show that “most effectively celebrates non-conformity.”

Come to the closing party and awards night on August 1, 2021 at the Charlottetown Beer Garden at 8:00 p.m. to find out the show that is so-celebrated. 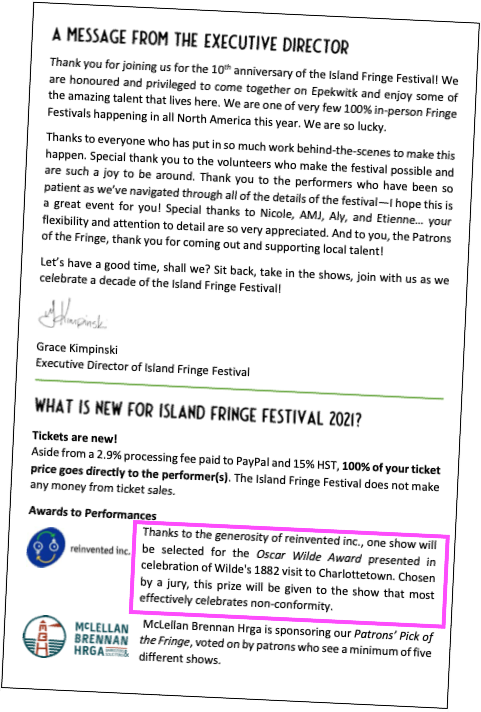 Great support of the arts! You are the sponsor; who will be the judge?

My original thought was that the artists in all the shows should collaboratively jury the award, picking one of their own to receive it. Alas timing means that not all the artists get to see all the shows, so that wasn’t feasible. So Island Fringe staff will conjure a jury.

I have always loved this Oscar Wilde anecdote, so am really excited about this prize. Thanks for keeping the story alive in such a perfect way.