When Oliver was a student at the Holland College Child Development Centre, one part of his day was spent in an area called “daily living.” I always loved the idea of spending part of your day doing “daily living,” as though a everything else was, well, not that.

One thing that Oliver and I share a passion for is anything that affords a “behind the scenes” look. This is part of the reason why I love having my office tucked away here in a corner of The Guild: every time I use my special key to unlock the special door to go up the special staircase to the hidden mezzanine beside the theatre it feels like I’m going backstage.

It’s the same reason that makes one of the best fringe benefits of being Hacker in Residence at Robertson Library the fact that my ID card affords me 24/7 access to the building. There are few cooler things than wandering the darkened empty aisles of the library after hours. It’s like Career Opportunities, albeit without Jennifer Connolly.

My daily living today included making this portal to the outside world after a blizzard: 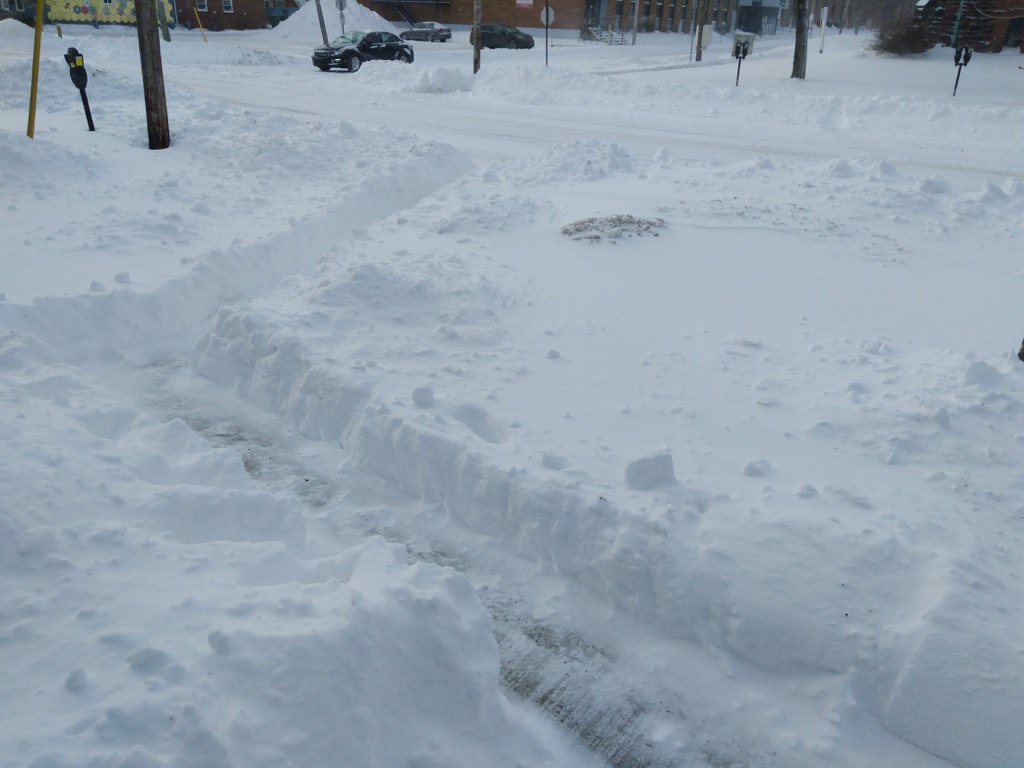 I shouldn’t be as proud of that as I am. But I am.

When I took the portal through to the city and walked up the street to the aforementioned Guild, I found that part of the reason the blizzard left no snow on our roof was that it left a lot of snow in the front entrance there: 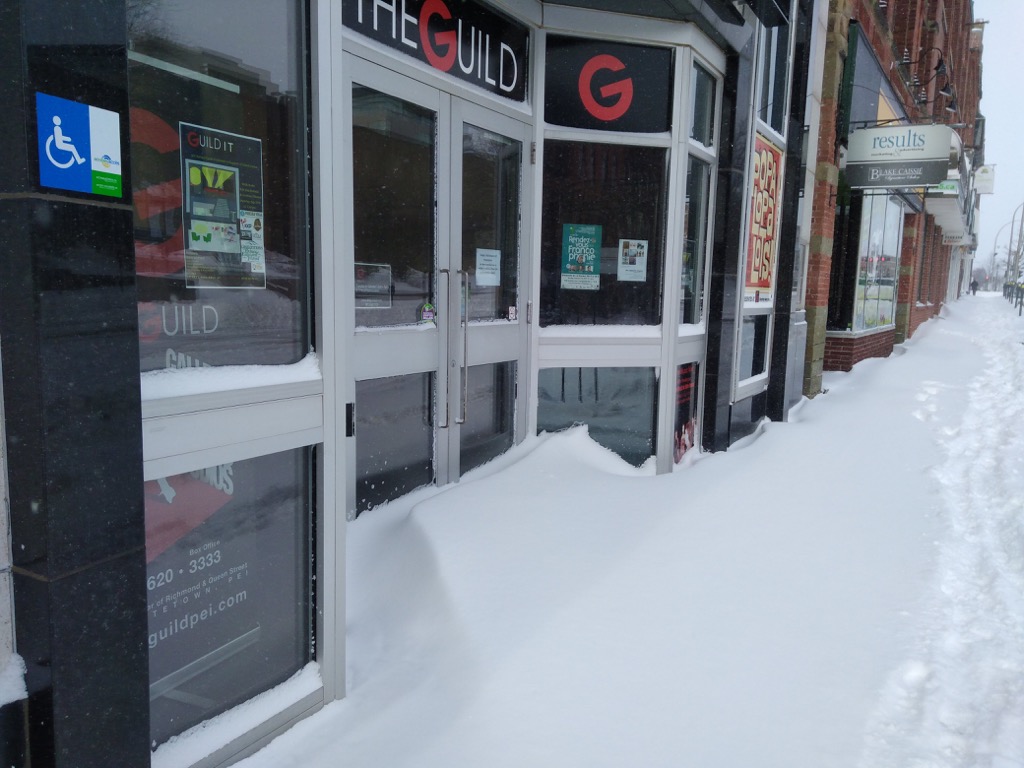 Around the corner along Richmond Street there was even more snow, formed into the most intriguing pointy drifts: 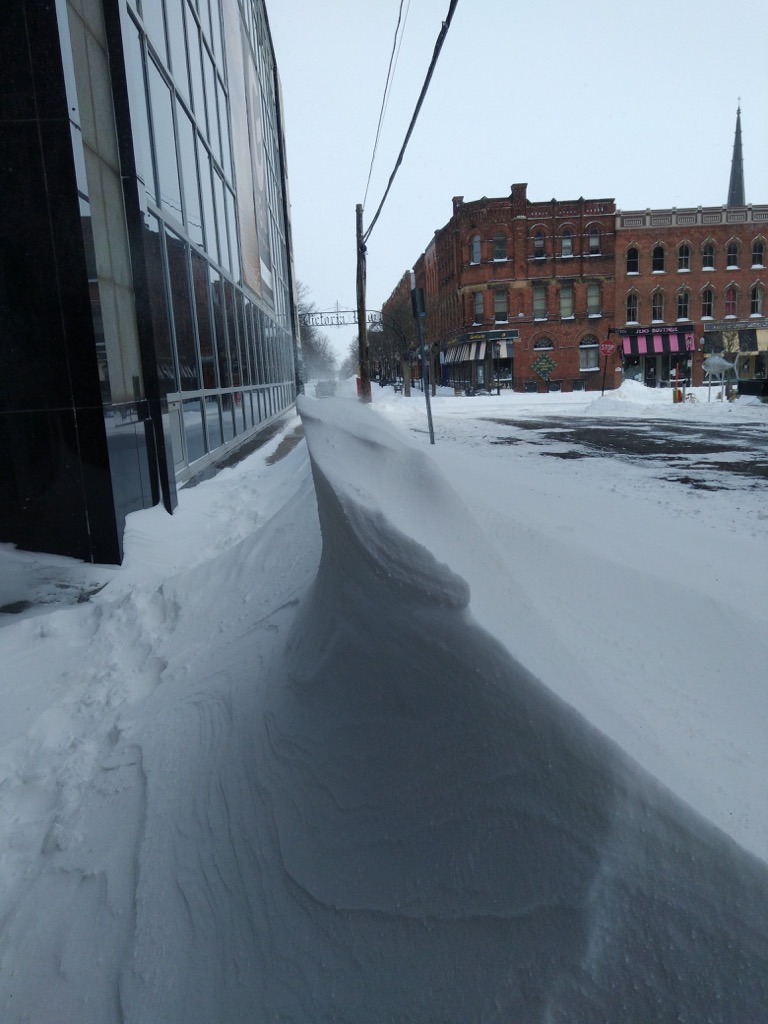 One of my favourite posts I’ve ever written here was, in fact, named after daily living; one morning in 2009 I detailed the first two hours of our morning. More so than any picture, that minute-by-minute diary of our morning routine transports me back to that time (several years later I met the “woman with the salmon-coloured hat” face-to-face and found that she’d read the post; that delighted me). I read:

Sometimes he turns around and says “Or have a good day at the gym. Or at your meetings.”

And tears come to my eyes.

One of the unfortunate aspects of the digital revolution as it now lives is that, despite Facebook, Twitter, Instagram, Pinterest et al, we seldom find ourselves gaining any insights into the daily living of others in our broader community. Social media is more of a pithy highlight reel of life than any reflection of the delights and mundanities of everyday life.

I miss this. And for entirely practical reasons.

I watched a video yesterday on the website of Dr. Ross Greene (Explosive Child, etc.) that shows him walking two parents through an “ALSUP” process–the “Assessment of Lagging Skills and Unsolved Problems” that’s one of the building blocks of his Collaborative & Proactive Solutions model. While the video was helpful to me clinically, it was even more helpful in an “oh, wow, that family works a lot like mine” way.

It’s the same feeling, I think, that Oliver had when he cracked open The Survival Guide for Kids with Autism Spectrum Disorders for the first time and read about other people who shared his diagnosis.

And the same feeling I get when I have a chance to talk to other spouses of women living with metastatic breast cancer.

And not in a spiritual sense or a psychological sense or a cataclysmic sense, but simply in the pace of our daily lives.

Where we buy our milk. How we shovel our snow. How we sharpen our pencils. The people that we meet when we’re walking down the street.

Not the social media highlight reel, but rather everything else.

I had coffee with my good friend Bruce earlier this week and he asked me why I blog.

This is the sort of question we used to talk about all the time during the heyday of blogging–I once dragged brother Johnny to an event at Harvard where this was all that was talked about. But now that we’ve reentered the Dark Ages, such talk seems tantamount to discussing the mechanics of fountain pen piston converters.

Returning to the question today, though, I find myself coming up with much the same answer as I gave on that cold winter night in Cambridge:

Oliver, hello, it’s me, your father, thinking of you here in the past

But also, in writing about the snow drifts and shopping lists and hospital victories and strawberry socials and Icelandic swims of my life, I hope, perhaps in vain, to encourage others to do the same.

In other words, if indeed it’s good to know we’re not alone, I write here as part of an effort to make that more possible more of the time.

Please, find a way to tell me about your daily living.