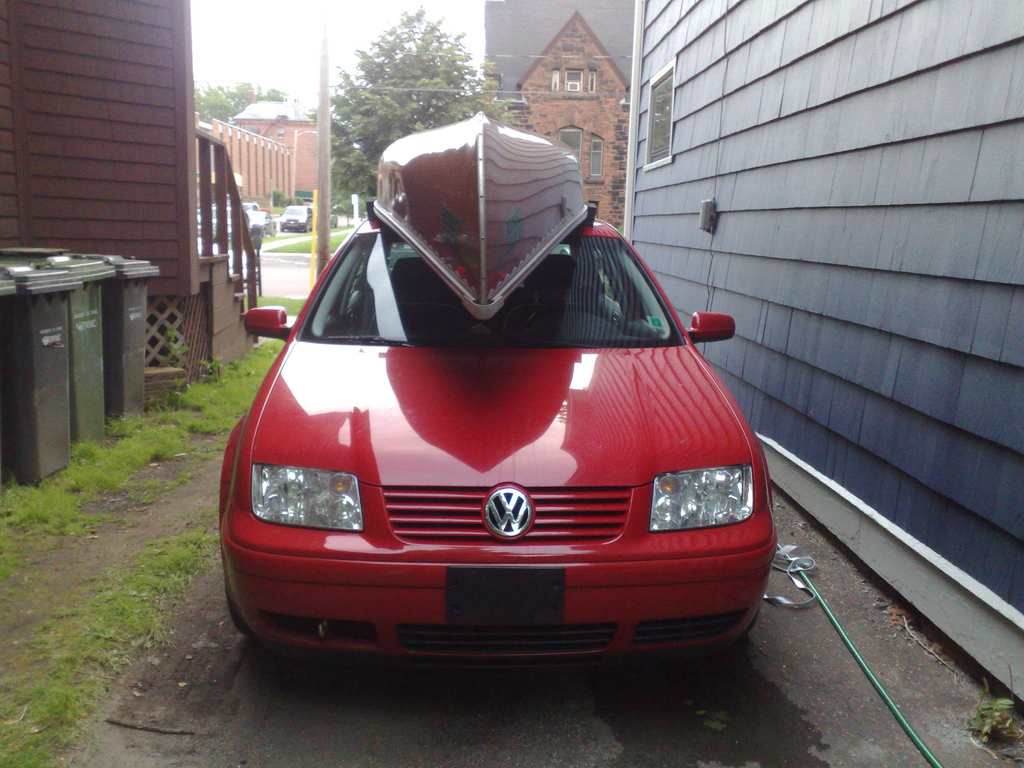 Regular readers may recall that two weeks ago I wrote of my difficulties with securing my canoe to the roof of my car.  I’m happy to report that on Thursday afternoon the letter carrier delivered a box of four Rubber Rope Foam Canoe Blocks from Mountain Equipment Coop.  With the addition of some cambuckle tie-downs from Canadian Tire we were ready to give things a try.

As Catherine’s lifting capabilities are temporarily out of commission, it fell to me to get the canoe from the back yard onto the roof of the car.  While not directly on-point, this YouTube video was enough to get me started: I got the canoe over my head with the foam blocks already snapped to the gunwales, walked over to the car until the canoe was parallel, set one gunwale’s foam blocks onto the car and then sort of walked/shimmied the canoe into place.  With some trial and error it worked; the biggest issue was the foam blocks flipping off and needing to be re-secured during the shimmy.

Once the canoe was on the roof, I ran a 16 foot strap all the way around the canoe’s middle and into the car, securing the cambuckle inside the car and ratcheting it tight. The ratchet mechanism on the cambuckles isn’t obvious to the new eye; it took some trial and error to them to work.  The most useful thing I learned is that you should pull through all of the slack before starting to ratchet, rather than just sticking the “tongue” of the loose end in and ratcheting from the start.

With the canoe’s middle secured, I then tied a strap from the rear tow-hook on the Jetta up and around the canoe’s carrying handle and back, again securing the strap with the ratcheting cambuckle.

When I went to do the same on the front of the car I found myself without a tow-hook to secure to; the solution to that problem warranted a blog post all its own.

Once middle, back and front were strapped in, I re-tightened all the straps and the canoe seemed pretty firmly secured to the car’s roof.  The only thing I wish I could have changed was that the Jetta has tow hooks only on the passenger side of the car, so that canoe gets pulled to that side (more on this later).

After about an hour of futzing around, we were ready to head out on the water.  I’d consulted the excellent book Paddling Prince Edward Island earlier in the day and had decided on Johnstons River as our destination.  It wasn’t a long drive, is a freshwater river east of Route 21, and we were promised calm waters and interesting views.

There’s a handy boat ramp on the eastern side of Route 21 on the far side of the river as you drive from town, and I pulled the car down, unloaded the canoe and the gear, and then parked on the side of the highway as the book (and the No Parking signs at the boat launch) suggested.

It was surprisingly easy to get us all into the canoe, considering it was Oliver’s first trip and the first time Catherine and I had been out in almost a decade.  Ten minutes after arriving we were paddling upriver; the calm water and interesting views were as promised. 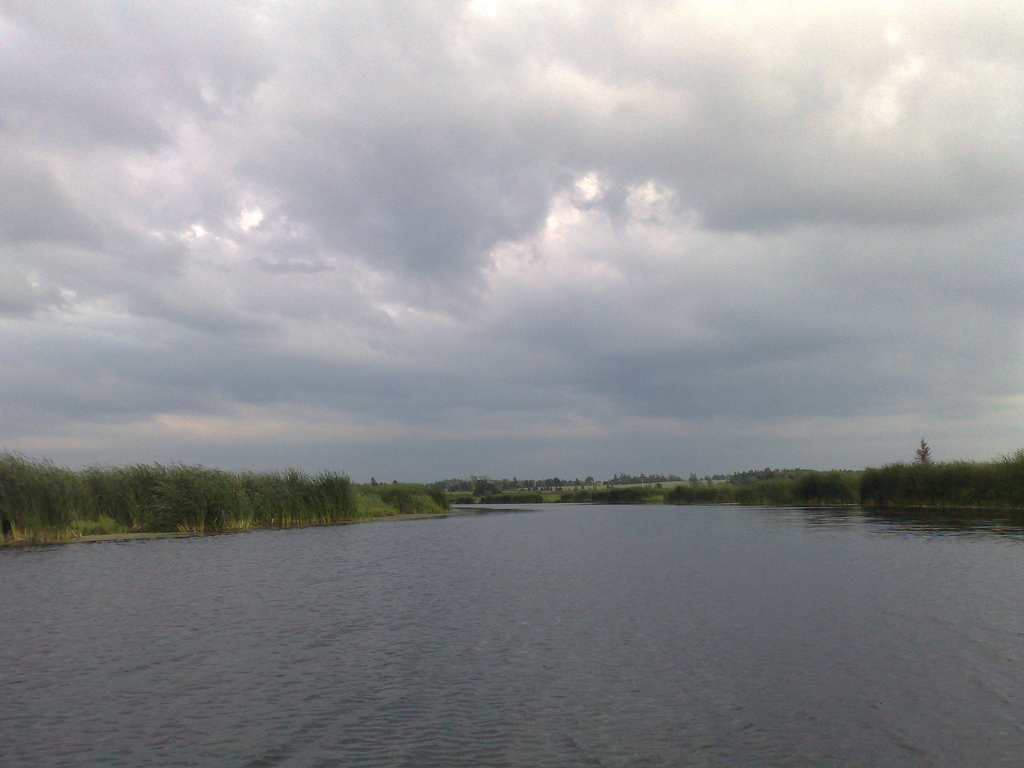 We paddled in about 2 km (map) and then suffered a tiny setback: the rivets holding Catherine’s aluminum seat to the gunwales, no doubt rusted out after a decade of storage in our back shed, gave way.  A very-surprised Catherine tumbled to the floor of the canoe, the canoe itself took a dip and let in some water, and Oliver and I looked on in astonishment.

Fortunately Catherine was in one piece when the dust cleared, and although we all got a little wet we were still canoe-worthy and able to make our way back to the car without further incident.  Loading the canoe back on the car went quickly, and we were soon back on our way to down.

It wasn’t until we were driving over the Hillsborough River that things got a little hairy again: the wind had picked up and a sudden gust jostled the canoe, naturally pulled to the right by its straps, a few inches over toward the passenger side.  It didn’t come off the car, fortunately, but it did prompt me to step and re-secure things and then to drive with my four-way flashers on until we got to the other side.  Obviously the canoe-strapping system needs some tweaking if we’re going to go any farther than Johnstons River.

So, canoe experience number one, despite some bumps, was generally positive, and all family members are game to give it another try.

You could just tie into the car frame in the middle of the front & back to alleviate your passenger side lean. You would have to put a cloth to protect your back bumper’s paint job but I think your front license plate holder would keep things in check on the front side.

The undercarriage of the Jetta is so completely sealed off from the elements by plastic shields as to make no part of the frame accessible, alas.