It’s coming up to the end of East Coast Music Week here in Charlottetown, a yearly celebration, showcase, and conference for the music industry in eastern Canada and, for those of us lucky enough to live in the heart of the downtown of the host city, a fantastic opportunity to see a lot of very good music packed into four days of performances at venues 5-minutes-walk-or-less away.

I was determined that, unlike the last time ECMW was in Charlottetown, I was not going to miss out, so, against all my procrastinatory impulses, I purchased an $80 wristband well in advance, entitling me to access to most everything.

And thus it was, armed with the (excellent) ECMW app on my mobile, I headed out into the night on Thursday to go clubbing. One of the great things about having a wristband is that you can be promiscuous in your habits, jumping genres by just picking up and heading down the street. Over the course of the evening, then, I was able to see Amy & Rachel Beck, Brianna Gosse, Eartbound Trio, Colour Code, Breagh Mackinnon and Dennis Ellsworth in as many venues.

On Friday night, thanks to my generous brother Johnny, who stayed home with Oliver and Ethan, Catherine was able to join me and we headed down to the Delta for the “roots” showcase and saw Ryan LeBlanc, Amelia Curran, Samantha Robichaud, Catherine MacLellan, Chrissy Crowley, Dave Gunning, Mary Jane Lamond and Wendy MacIsaac, and Tim Chaisson. All this accompanied by the culinary stylings of Leo’s Thai Food (chicken basil rice) and the Big Orange Lunchbox (lobster tacos), who saved me, not having had time to grab dinner before, from a grumpy hungry night.

On Saturday night I was back out on my own, with my eyes set on the Music Nova Scotia showcase at the Pourhouse, the craggy little venue atop The Old Triangle. Having been turned away at the same event on Thursday because it was over-capacity, I arrived 90 minutes early only to find the room packed already, with not a seat to be found and most everyone there jealously guarding their turf knowing that they were lucky to have secured a seat. No eye contact, in other words; no “you could squeeze in here.”

I was close to giving up and heading home, but decided to stick it out, find a windowsill, pull out my copy of The New Yorker (brought along for just this purpose) and wait, finding a place to stand once the music started to roll.

I was well into the Talk of the Town, minding my own business when someone approached and called me by name.

I looked up. Vague recollection spread over my face, which he recognized. Oh, right, yes.

It was the chap who, when we moved into our house at 100 Prince Street fourteen years ago, we contracted to gut our second floor bathroom and build it back up to modern standards (i.e. no carpet on the floor, no shower head coming out of the side of the bathtub). It was a dusty, complicated job, and, as these things often go, we got to know the crew pretty well.  Which is why my interrogator, working as a volunteer in the venue, recognized me and why, eventually, I recognized him.

We chatted for a moment, and, just as he was heading off to his volunteer duties I said “Hey, if you happen to find an extra chair somewhere, I’d really appreciate it.”

Five minutes later he poked his head out with a contraband chair, purloined from the green room (meaning, I assume, that Old Man Luedecke’s sideman was sitting on the floor; which is why I won’t mention my benefactor’s name, lest Old Man Luedecke seek retribution).

With heartfelt thanks, I held onto the chair for dear life and headed back into the fray looking for a place to park it. With luck now on my side, I reasoned that this was no time to be timid, so rather than finding a dark poorly-sightlined corner at the back, I maneuvered myself and my chair right up to the front, set it down in a tiny, convenient patch of floor beside a large enough group that it would look like I was just fitting in, and proceeded to act as if I was supposed to be there, shirking off the imagined barbs of those who’d been camping out for hours just to get a table in the same region.

And I didn’t move for the next 3 hours.

I had a completely unobstucted view of the stage; here, for example, is Gabrielle Papillon and her large retinue of players: 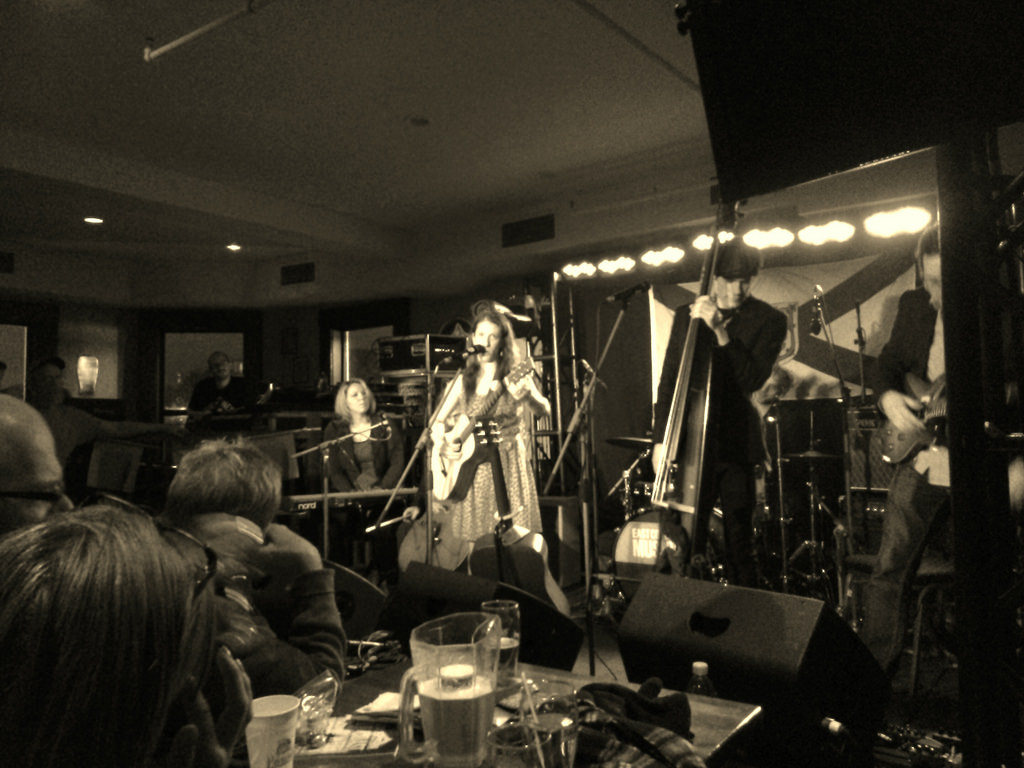 It was a fantastic night of music: Ron Bourgeois (a talented singer-songwriter from Cheticamp), Old Man Luedecke (not, to my surprise, old at all; crackerjack banjo-based duo with a set of irony-tinged songs), the aforementioned Gabrielle Papillon (an unexpected joy) with Jimmy Rankin (a pure pleasure: such an entertainer).

As the night played on I became ever-more-thankful for my luck, as the venue filled up and filled up and people were hanging from the rafters and perched precariously on the floor. By 11:30, with the night, relatively speaking, still young, I headed out, willing my chair to the couple who had been patiently standing beside me for 2 hours; I would have stayed longer, but I needed to ensure I didn’t completely lose my hearing.

I great night at the end of a great week.

And proof that, if you live on the Island long enough, it will reveal its fringe benefits to you at unexpected moments.