In a recent blog post Stephen Fry relates, in compelling detail, several “Twitter firestorms” he has inadvertently set off. He begins:

Every now and again, what with me being what I am (a human), I find myself hurled into the teeth of some sort of twitterstorm. Either I get a bit cross with someone ( or “throw my toys out of the pram” and “have a hissy fit” as some would prefer to put it) or I tweet an opinion or experience that for some reason turns into a “story” with all the distortions, Chinese whispers, misunderstandings and embarrassments that “stories” generate.

This afternoon I’m experiencing my own version thereof, admitedly a much smaller one.

A couple of days ago I began to see tweets in my stream, hash tag #bringQtopei, advocating for the CBC Radio One program Q to visit Prince Edward Island.

I am nothing if not a cynical bastard, and among my great aversions are pandering and civic boosterism. I’m also not a fan of the wheel-and-spoke nature of the CBC that divides the country into Toronto and “the regions.” And so I’m averse to anything that seeks to enhance and celebrate that — like anthropological Royal Visits of CBC personalities out to the periphery to eat lobsters, heap praise on the local band of the moment, and then hop on the plane back to HQ.

What’s the hash tag to use to ensure that @jianghomeshi is prevented from ever visiting Prince Edward Island?

@ruk ha. well played, sir. but two decades too late. my fam would make summer trips to PEI when i was a kid. and i loved it. (sorry!)

Touché, thought I. And then I went on with my life.

This afternoon, however, something happened: my iPad started lighting up with @reply notifications every couple of seconds, and as my original tweet spiralled further and further into the viralsphere, I became an ass, a goon, a hater, and an idiot. All of which only got worse when Jian himself tweeted:

Ouch. #StayAwayPersianBoy ? RT @ruk What’s the hashtag to use to ensure @jianghomeshi is prevented from ever visiting Prince Edward Island?

Which others misread as coming from me. And so I also became a racist.

As Stephen Fry summarizes: “Well, what does that all that tell us or teach us? Not so very much really.”

What an interesting day. 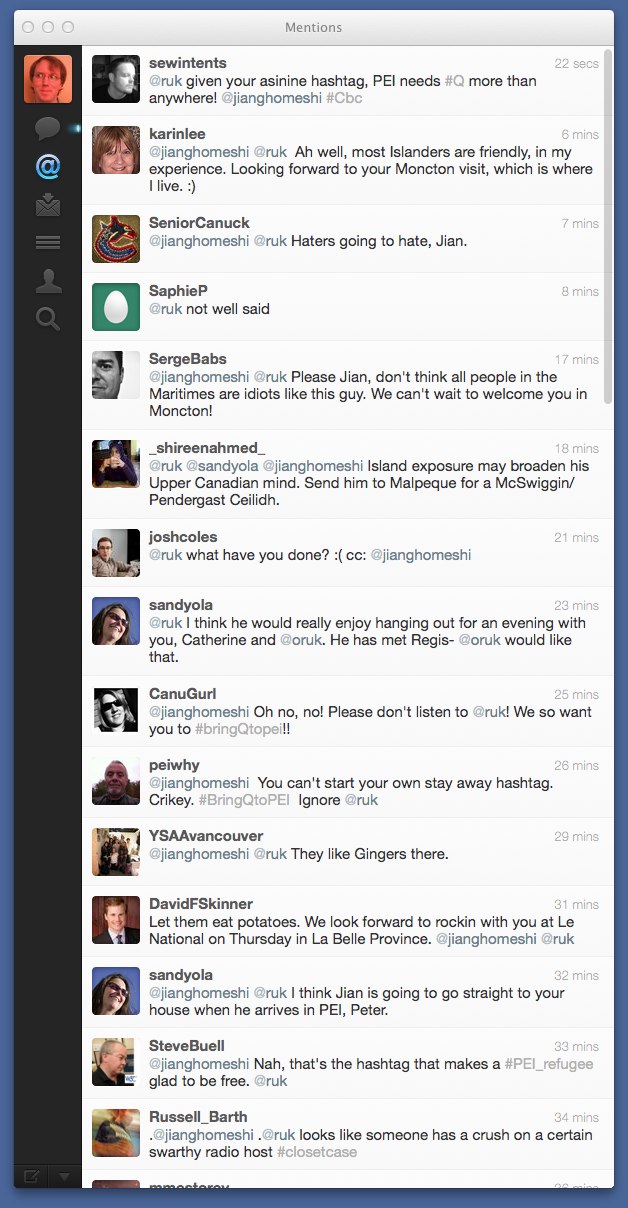 Wow… firestorm indeed! I was curious about your tweet but never would’ve guessed the firestorm would ensue or that you had any negative intentions.  That’s a shame. I like the #closetcase tweet LOL!

I regret getting out of the habit of blogging because I avoid saying anything too controversial on Twitter where the size limit of posts prevents me from explaining myself properly.

The tweet was given a context of racist goonyism by the retweeters, which is how they colour in the blank mental space where their knowledge of PEI should be.  This is what happens when intellectuals have a popularity contest, over excitement erupts into fascism. LOL.

These days, everybody is a “racist”. Social media has just given more opportunity for the spreading of opinion without much of the shame factor. CBC in general and particularly Go-messy has some really fervent supporters and for many of them, the CBC is a religion and you better not utter blasphemy or you will feel their wrath. These CBC “personalities” listen too closely to those supporters, so it is a rude awakening for them when someone speaks out in dissent. I don’t care if he comes or not. His work means nothing to me.

Yikes. This is why I don’t use Twitter more.

Jian is so annoying, will he be part of the cuts made at CBC :-), fingers crossed

They should have listened to you, Peter.