Remember the Evans McKeil, the tug that visited Charlottetown Harbour last week? Well I noticed last night that she was back, and I decided that I couldn’t let this second visit pass without going down to the Port of Charlottetown to take a look up close. After all, had my father had his way, I would have once worked for McKeil Marine and the tug might have been my workplace.

Regular readers may recall that Catherine, having grown up on a farm, is the most trespassing-averse person you’ll ever meet. She simply won’t trespass, or even engage in anything which has the slightest whiff of trespassing. Fortunately, Catherine is 1,500 km away as I type, visiting family in Ontario. Although her trespass-averse ways have infected me, there lurks inside me the kernel of a trespasser, and it was that kernel that I called upon to allow me to breach the tight security at the port.

As it turns out, all those “RESTRICTED AREA: Authorized Persons Only Beyond This Point” signs that greet you at the end of the wharf appear, at least on Canada Day, to be security theatre. After cycling through the (wide-open) front gate, I dutifully knocked on the door of the “Port Security” shed, thinking that I should at least check in.

But there was nobody home.

I cycled to the end of the cruise ship side of the wharf but was greeted by 12’ high fencing that extended out over the water (apparently keeping cruise ship passengers penned-in is the highest priority of the port).

On my way back I noticed that the high security fencing separating the cruise ship side of the wharf from the working wharf had a convenient passageway in it at the end, just the size of a stout middle-aged man riding a bicycle.

I pedalled my way through, and, shortly thereafter, was standing in front of the Evans McKeil, perched with her bow abutting a football-field-long gravel barge that she’d nudged here from Nova Scotia. 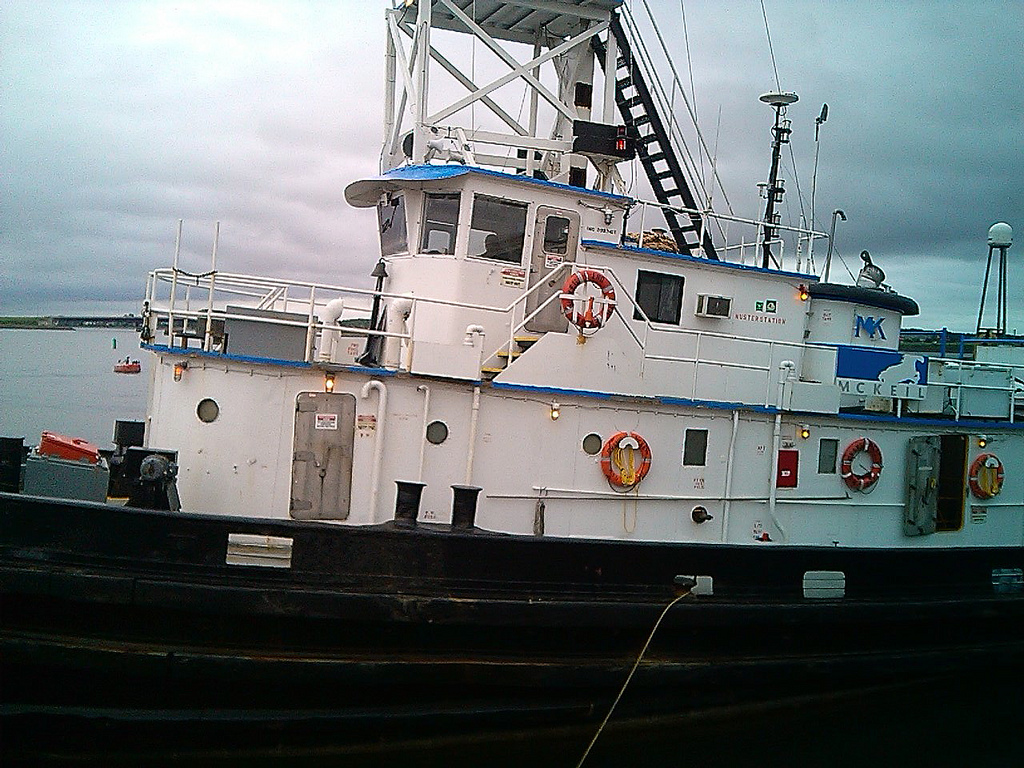 It bears mentioning at this point that I have an almost-pathological fear of burly working men. This is why Catherine handles relationships with the trades in our household, and it’s likely the aspect of my personality that my father though might get toughened out of me if I went to work on a tugboat when I was 16.

So introducing myself to the crew of a gravel-barge-pushing tugboat – perhaps the burliest of burly working men – is not in my nature. But now was not the time to be a shrinking violet.

“Hello there,” I yelled down to the crew, a group of 3 or 4 men gathered in the stern.

“Happy Canada Day!” they yelled back. “You’re not the guy who’s bringing us beer are you,” one of the crew joked.

“She is,” an orange-suited crewman replied. “She’s riveted together,” he said proudly as he pointed out the rivets in her hull, “made before welding.”

“Have a good holiday,” I yelled down as I pedalled off.

“You too,” they replied.

Now I may have a pathological fear of tug boat crewmen, but I also know that if a tugboat crew jokes about beer, they’re probably thirsty for beer. And it’s Canada Day. And they’re stuck on a 77-year-old tugboat behind hundreds of tonnes of gravel.

It was time to spring into action.

Fortunately the recent liberalzation of liquor laws here in Prince Edward Island means that the liquor stores are open on holidays like today. I pedalled up to the Queen Street store, made my way to the cold beer cooler (reasoning that cool beer rather than warm beer is best to ward off the taste of gravel barge in your mouth), and picked up a 12-pack of made-in-PEI Beach Chair Lager (my choice made both in support of a PEI brewery and also because their 12-pack of cans seemed like it would fit in the carrier on the side of my bicycle). 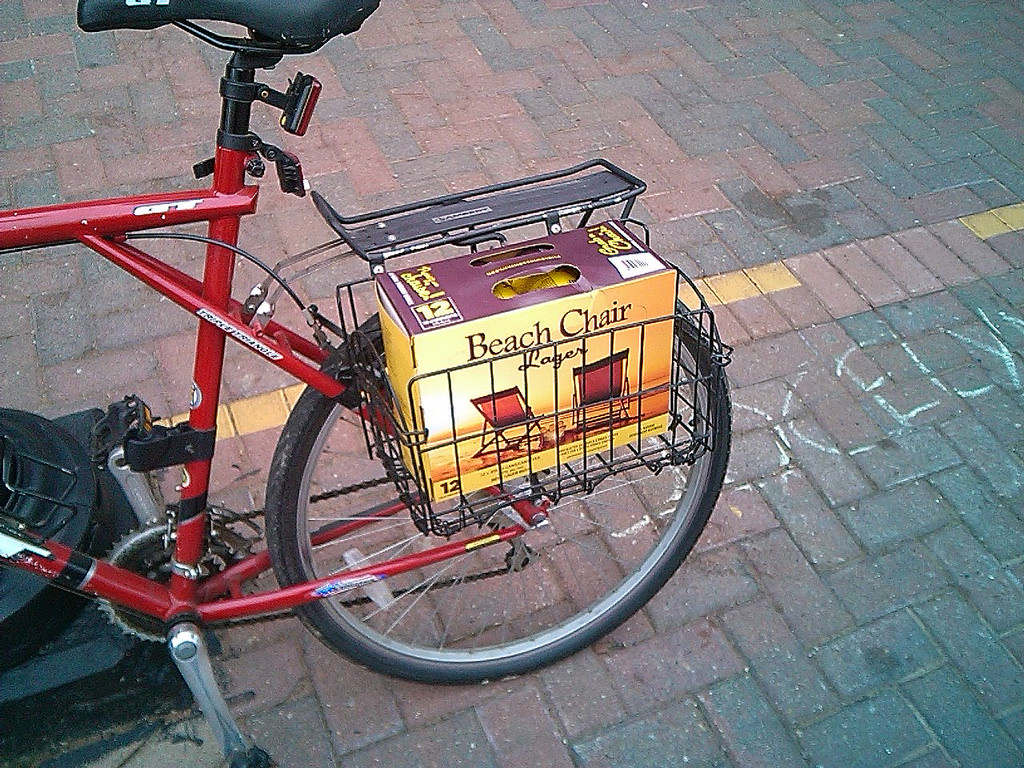 I made my way back to the Evans McKeil, once again breaching the stringent security perimeter, and found two of the crew, including the one I’d chatted with, up on the wharf.

“You didn’t think I’d really bring you beer, did you?”, I asked.

They had a puzzled look on their faces.

“Happy Canada Day!”, I said, as I handed over the beer. “My father knew Evans McKeil, and I’m just passing this along.”

Somewhat disbelievingly – who is this strange man on a bicycle bearing gifts of beer, their look said – they thanked me warmly.

I pedalled off into the sunset, safe in the notion that I’d done the right thing, and made a tugboat crew’s hard life just a little easier.

I hope I did my father proud.

Full points (or pints) to you for that one, Peter.

Well done. This is how we make the world a better place to live.

Your “Paying it forward” gesture Peter was one the crew may never forget! They may themselves reciprocate the giving to others and also have a great story to tell of a generous PEI guy who came out of the blue bearing gifts of sweet lager!

If you use rivets, what’s to prevent water from creeping through the seam or gap between plates—in a collision at any rate, if not from every day use? Tar?

(and I thought it was a great story too)