The CBC is reporting that the Island’s two daily newspapers will be printed in Halifax starting this summer.

With printing moving to Halifax, the papers will have to be transported across the Confederation Bridge — which is at times closed to high-sided vehicles, particularly in the winter.

Cameron said both high-sided and low-sided vehicles will be “deployed to alleviate the challenges of winter conditions.”

One can imagine an emergency wagon train of specially equipped El Caminos plowing across the bridge to save the Island the indignity of going without (what the spokesperson identifies as) the paper’s “thoroughness, resonance and permanence” due to weather.

Prince Edward Island has a glorious printing tradition stretching back hundreds of years.

Back in November 1904, The Guardian reported that “Chas S. McDonald, Covehead, was in the city yesterday. He visited The Guardian office and saw the new press.”

That new press, a Duplex Web Perfecting Press, had been installed earlier that fall with great fanfare, with the entire front page of the September 28, 1904 edition devoted to the press, under the headline “The Guardian Newspaper Leading the March of Island Progress”: 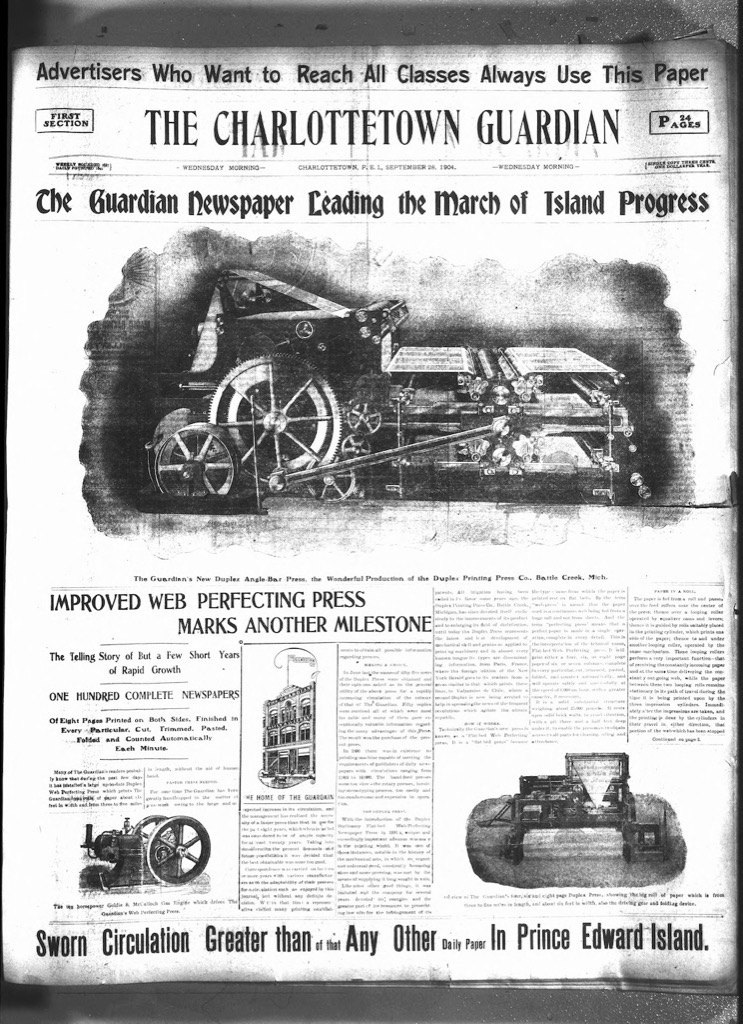 That story continued onto page 2, where the history of the newspaper’s presses to that point was included. When the paper was founded in 1891 it was printed on “an old Fairhaven Press imported many years previously.” In 1896 it was replaced with a Cottrell Press; that press was quickly fitted with an electric motor, “the first application of electricity for power purposes in P.E. Island,” the paper reported. The was the press replaced in 1904; an invitation to “all subscribers, patrons and the general public” was extended to come and visit it.

You can sense similar pride emanating from The Guardian when, in 1929, it told the story of its own  brand new Duplex Tubular Plate Rotary Press. The installation, the paper reported, “marks a period in the printing annals of Prince Edward Island.”

As, alas, does this latest move to expatriate the printing offshore. It’s sad to see the efficiencies of the Fixed Link claim another victim.