Well, I set Oliver loose on Scratch last night (“a new programming language that makes it easy to create your own interactive stories, animations, games, music, and art”). Oliver’s younger than the target age of 8, but he’s also very good at iterative learning (i.e. click on everything, see what it does, proceed accordingly; it’s a method not unlike the way I work everyday).

Watching him use the system, which requires almost no typing (really just numbers — changing “move 10 steps” to “move 20 steps”), is instructive. I think he groks the metaphor — dragging programmatic jigsaw puzzles pieces together to make combinations like “move 10 steps, make a pop sound, repeat” — and with a little practice he’ll be able to do some interesting things.

Indeed, much to my delight, he has already managed to figure out how to change the background of the “stage” and he was able to record the sound of himself making a “meow” sound and attach it to a cat sprite. This is way, way more fun than Logo ever was (it’s hard to get excited about moving a turtle around a surface in the age of Spiderman). 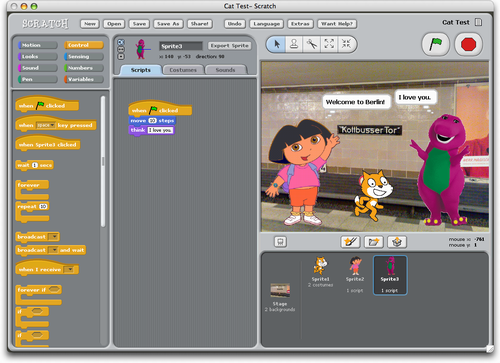 On a higher level, it’s interesting to see that Oliver’s big interest is in mixing the characters of his favourite TV shows together in new ways: one of our first experiments together was to take the code sample “Pacman” game and replace Pacman with Dora the Explorer.

Although Oliver knows that Dora and Lunar Jim and Arthur and Caillou all inhabit separate TV worlds, he sees no problem with mixing them all together inside Scratch. Which raises some interesting questions about remix culture and intellectual property. When Oliver creates some sort of combo Dora-Barney-Backyardigans pong game with ghost sounds and tractors and wants to release it for others to use, is that okay?

While there may be copyright arguments to suggest not, in a just world I have to think that it’s only fair that kids be allowed to remix the commercial icons that are so ingrained a part of kid life these days. Surely we deserve some recompense for agreeing to include Pooh toothbrushes and Dora toilet paper in our lives?

Pooh toilet paper would be a more intriguing product tie in.