The specter of “Internet safety” reared its head last week at the Home and School meeting — there are plans afoot to bring the police into run a session for parents. And while I’m all for helping kids develop skills to keep them out of the hands of the evil-doers, I’m also conscious that concentrating so much on the notion that evil-doers may be lurking behind every corner of the Internet can create fog of paranoia and suspicion that’s not healthy.

I’m not saying “hey, go wild, give out your phone number and my credit card number to that MySpace guy who offers you candy,” but rather “let’s equally as much concentrate on the empowering aspects of this machine as the corrupting ones.”

(I also have my suspicions that a lot of what’s passed off as “Internet safety” is new-style Puritanism, a wrapper for irrational parental fears and ignorance — “censorship lite” under the guise of crime prevention).

When I walked into our den tonight to tell Oliver it was time for bed, here’s what I found in his browser: 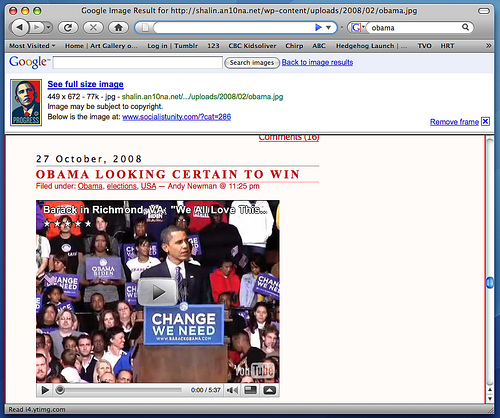 Oliver had Googled “obama” — all on his own — and was watching a 2008 Obama campaign speech in Virginia on a YouTube player embedded in the UK-based Socialist Unity website.

Apart from my obvious pride — for Oliver’s ingenuity, spelling, and political tastes — I’m conscious that if Oliver lived in a household with a locked down web browser this might never have happened.

Worth a look is the final report from The Internet Safety Technical Task Force:

Heard about it a while ago on the Radio Berkman podcast:

So, we talked together and I told hoim that I could put a filter on his browser. He thought that was a good idea and we allowed him the request that if he finds his access to anything accidentally blocked he can come to one of us and talk about it, with no blame or judgement.

I think that is a pretty sophisticated agreement with an 8 year old, but one that is clearly within the realm of his good judgement and mutual agreement all round.

Imagine if you had walk in on him watching McCain speeches.

I am with you Peter — a lot of Neo Puritans. I think that the web is like the world. Our kids will go there not matter what we do. Best we street proof them not make them paranoid or try and bock them.

Now I'm reading over this. how the world has changed from Barack Obama's Candidacy to Now.