I have a passing interest in O’Keefes Lake, a freshwater lake in Queens County, Prince Edward Island, near Avondale. If you’ve ever headed out the 48 Road from Charlottetown to Cardigan, you’ve passed it, perhaps without even knowing so, as it’s well-hidden from the road by trees: there’s just a short piece of road where you can look to the left to see the lake. 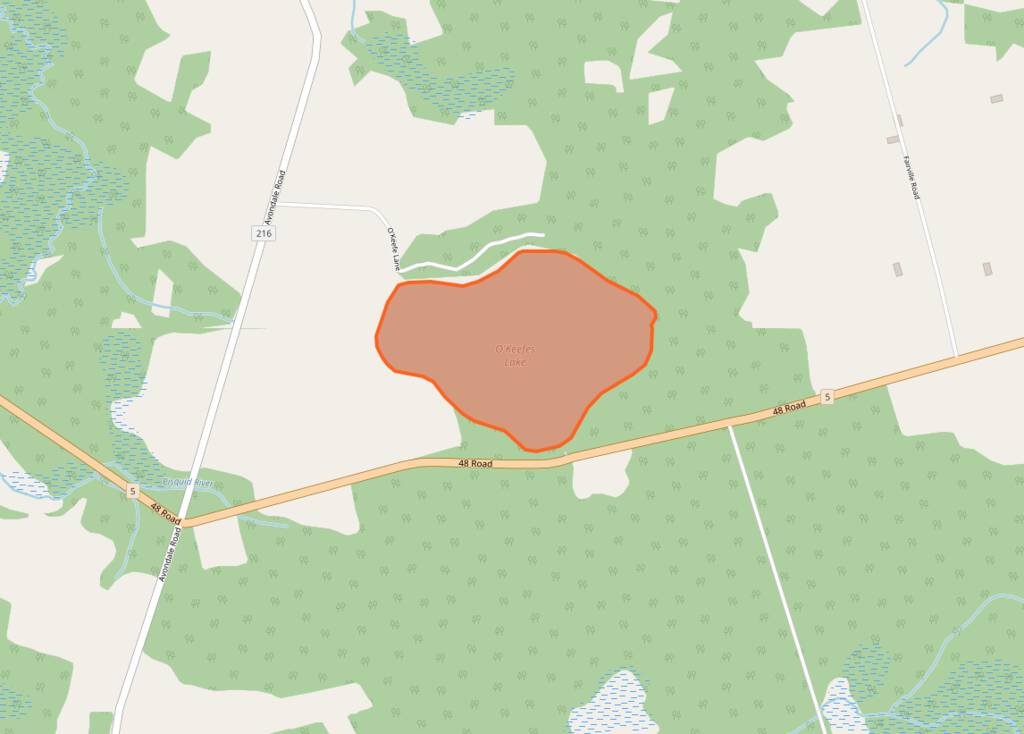 My interest in the lake was spurred some years ago when a substantial portion of its shoreline and, if memory serves, about half the lake itself, was for sale at a price that seemed remarkably low given, well, that you got to own half a lake.

Ultimately we found ourselves not in need of half a lake, perhaps put off, as well, by reports that the mercury levels in fish from the lake “can be in excess of recommended guidelines.” Who wants to own half a mercury-poisoned lake?

Of late, though, my interest in O’Keefes Lake extends to the mysterious presence of O’Keefe Lake Provincial Park on Google Maps: 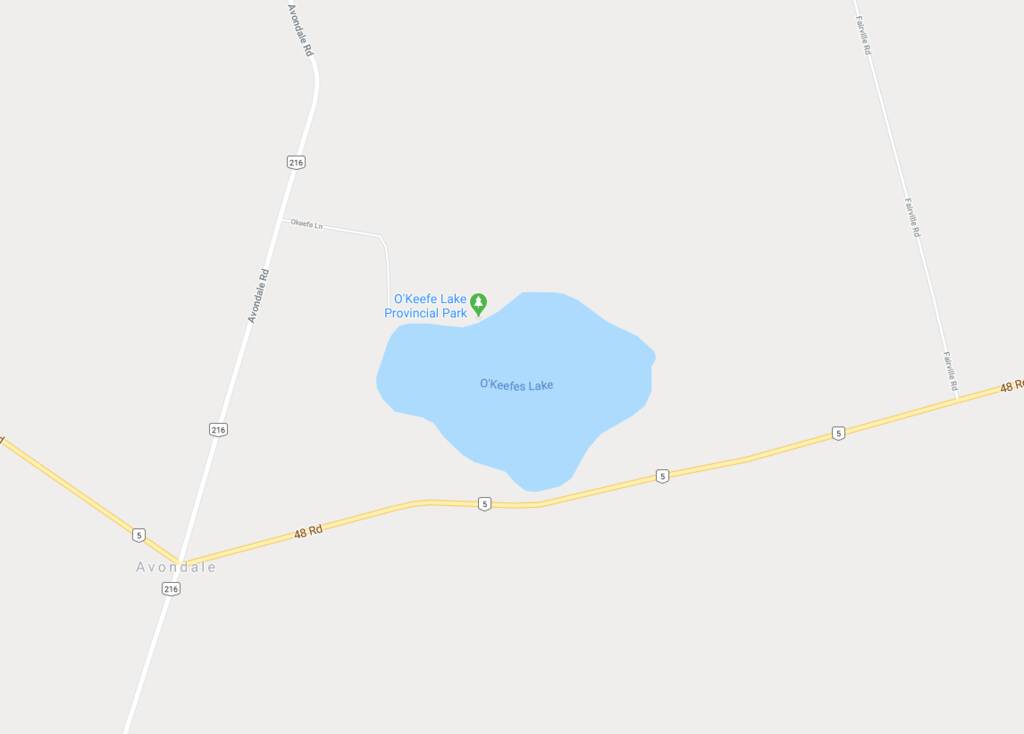 It’s there on Apple Maps too, if you search: 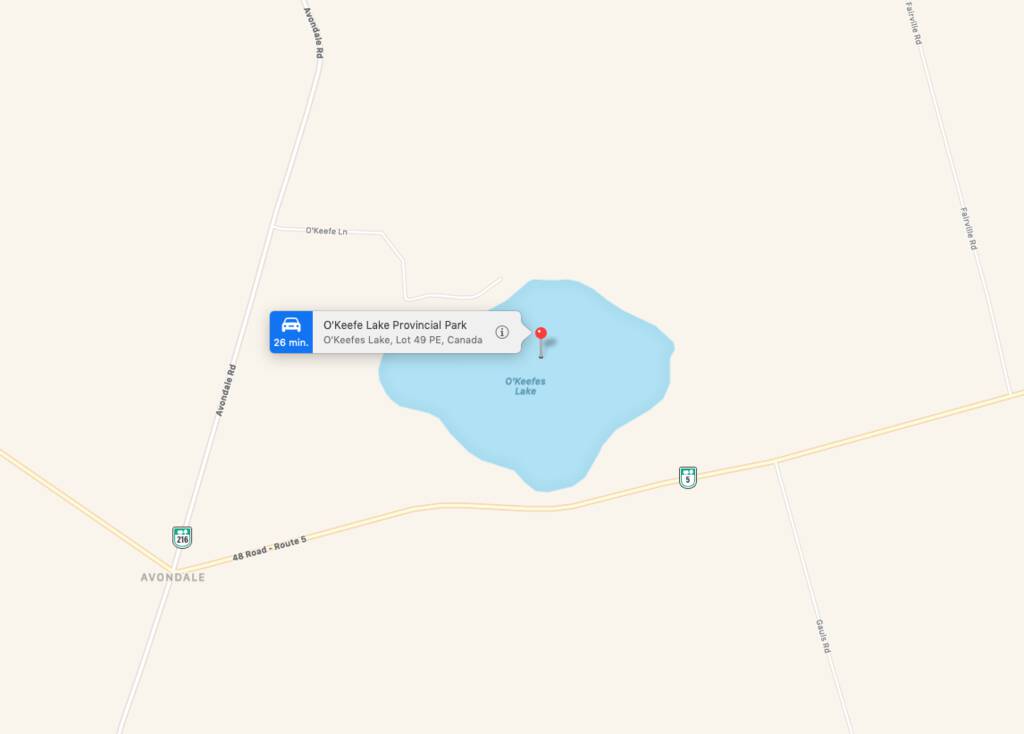 This is mysterious because there is, and never has been, an O’Keefe Lake Provincial Park.

And yet it’s on the map!

My assumption is that it’s on the map because, at one point, it was approved as an official Geographic Name, and appears in the Canadian Geographic Names Database, albeit, now, with the status of “Previously Official.”

I’m presuming that, at some point in the past, Google and Apple, or their upstream geodata providers, hoovered up all of the geographic names of the world, including those from Canada, and haven’t updated since O’Keefe Lake Provincial Park stopped being a geographic name. I’m presuming this because I did exactly this myself many years ago. 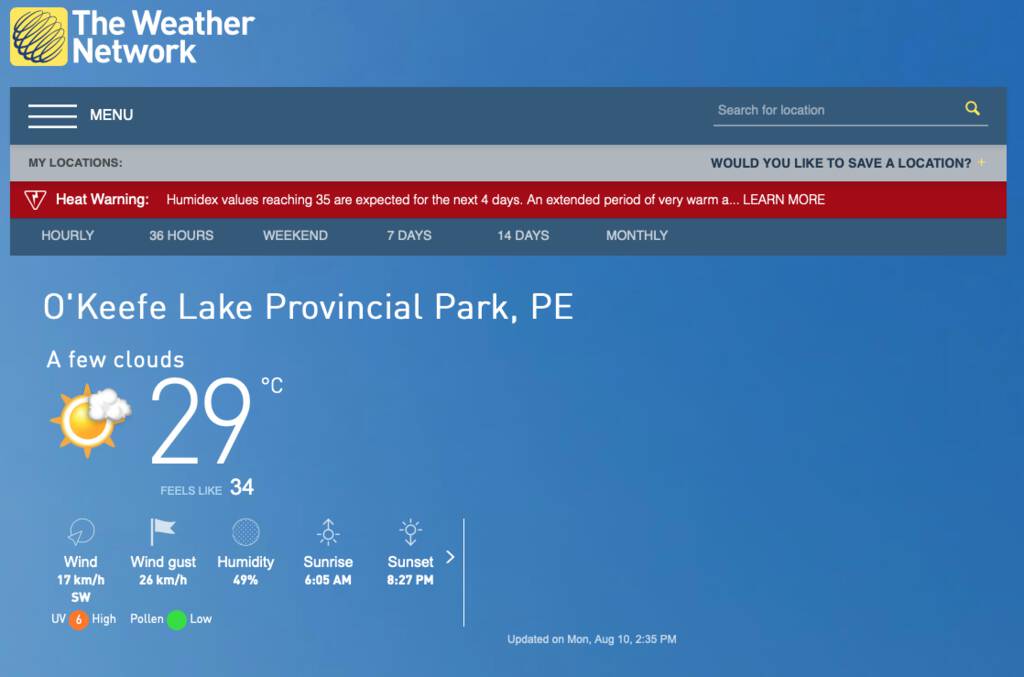 You can read about the “park” in Wikipedia in Swedish: 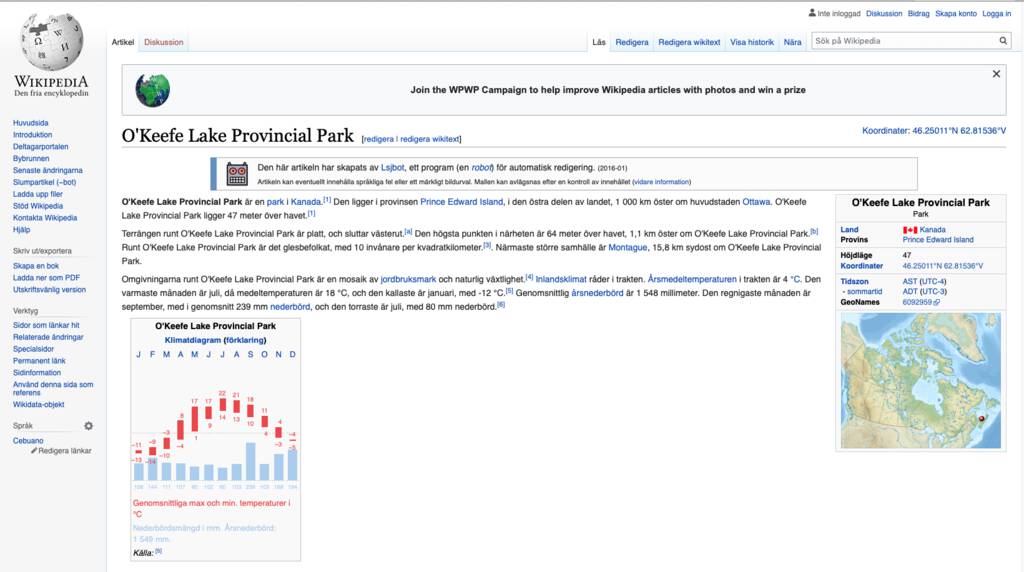 And you can book a table at one of the 11 nearby restaurants: 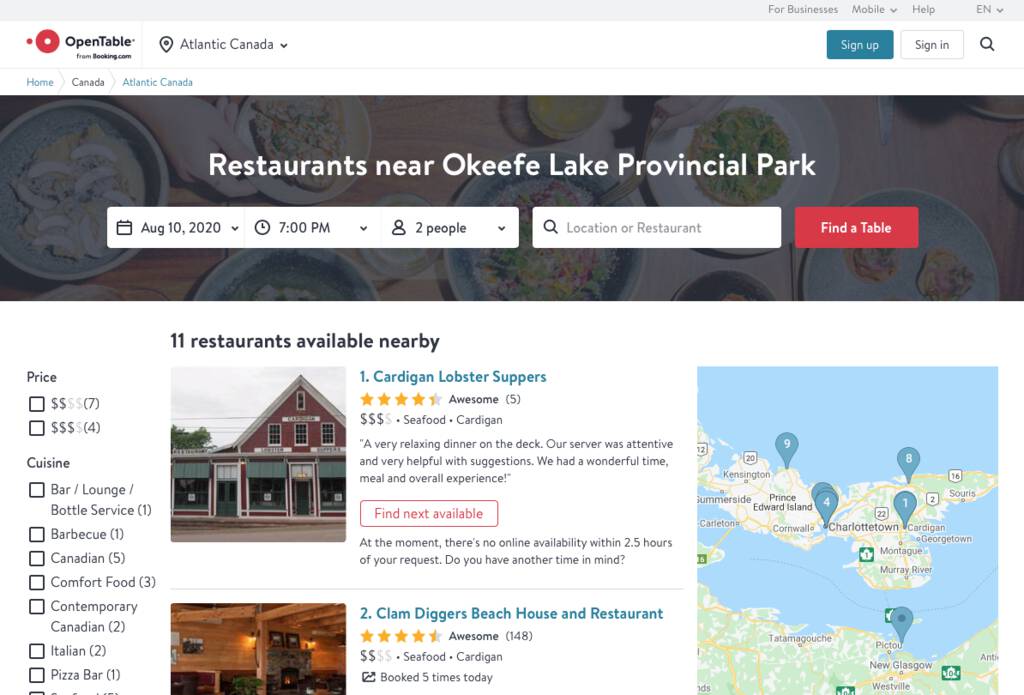 You may have noticed that it’s O’Keefe Lake Provincial Park, but O’Keefes Lake, with an “s.” It seems that the geographic name for the lake was originally approved, in 1946, as O’Keefe Lake  and then, in 1966, changed to O’Keefes Lake.

All of which has me wondering:

My next task is to try to make O’Keefe Lake Provincial Park disappear from the Internet: I’ve submitted edit requests to Google Maps and Apple Maps, I’ll add a note to the Swedish Wikipedia page, suggested the province update its PlaceFinder, and I’ll continue to monitor the situation until the vestiges of the park confuse us no more.

I discovered old rights of way listed as roads on the Stanhope peninsula - an error that resulted in an ambulance getting confused when trying to attend a man in medical distress. After considerable back and forth with the province who had seeded the database used to create the mapping I got the error corrected. No official admitted to the seeding or the existence of the error. Such is the way of bureaucracy.

I guess it’s about road sign legibility standards that apostrophes get disappeared. That’s what nagged at me about all the “Ferry” roads in Portland, which got me excited to find this article claiming to have delved the depths and promising to have tell all...only to find the contractions unacknowledged and unaddressed. I might go on to Google “contractions road signs” but why even bother, if no one cares?
https://www.oregonlive.com/history/2015/10/history_of_portlands_ferry_ro...

In the US seems there’s a national ban on apostrophes for official place names
https://en.m.wikipedia.org/wiki/Apostrophe

Sorry—even I can’t find it on my phone screen where the Wikipedia article says that about US policy, though Google told me it’s there. This blog post more or less acknowledges the same and it’s about nothing else
https://languagelog.ldc.upenn.edu/nll/?p=1090

During my years working on the website of the Province of PEI, the town of O’Leary, apostrophe-containing as it is, was the bane of my existence: in those early days, the solutions for dealing with things like:

SELECT * FROM PLACES WHERE PLACE = ‘O’LEARY’

with the need to “escape” the otherwise programmatically-confusing apostrophe, were not so clear