In 1958, Michael Alexander and his partner Diana (pictured here) journeyed from Istanbul, across Turkey and Iran and into Afghanistan. Alexander published the tale of their journey in the book Offbeat in Asia: An Excursion in 1960.


Although there is precious little practical information in the book — none of the detailed information about motivations, vehicle, sponsors, gear, etc. that one finds in other expedition accounts — the nature of the tale suggests they took a rather casual approach to the trip, viewing it more as a “jaunt” than an “expedition.”


Their vehicle was a 1951 Land Rover, purchased “in the upper reaches of the King’s Road for £265,” and appears to have been quite reliable but for the need to repair tires at regular intervals (in contrast to the Oxford-Cambridge Expedition Land Rover which, if memory serves, used only one set from London to Burma).


The book starts where the expedition does, at the Istanbul Hilton. Alexander calls this “the best hotel in Europe,” and the first chapter goes on at some length about its wonders:


All this and more inside was heady stuff to two ingenuous travellers just in from the dusty. bumpy road through Yugoslavia and Salonika, an eight-day journey from England that might have been accomplished in six had we not lingered by the blue Agean. Finally installed at the Hilton we were tempted to surrender body and soul to so comfortable a cathedral of materialism…”

From Istanbul, they travel to Ankara, Tabriz, Teheran, Babul, Meshed, Herat, Kabul, Bamyan, then back to Herat, through Teheran, and back to Istanbul: 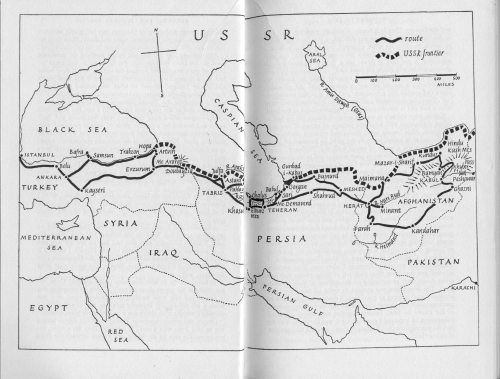 The tale finishes as it started, at the Istanbul Hilton, and closes with a note about the trusty Land Rover:


The only thing that failed to recover was the car, owing to its being driven from Greece with a holed radiator and a broken fan. It was a total wreck by the time it reached Dover, where it was ignominiously pushed off the boat and sold to a scrap dealer for £50.

While perhaps not as useful as other books for those looking for practical expeditioning advice, the book’s casual, breezy style does allow a interesting look at everyday Iran and Afghanistan; on arrival in Kabul, for example:


The social life of the town seemed to be centred on, or rather in, the rapidly drying-up river that ran through the middle: it was lido, lavatory and laundry — women washed, boys bathed, animals drank and performed their natural functions in its festering shadows. Behind was the bazaar, hiding as if ashamed behind the more pretentious buildings that line the three main streets.

I purchased Offbeat in Asia used at The Travel Bookshop in London in May of 2003. It is out of print, but copies are readily available from abebooks.com.

Iread OFFBEAT IN ASIA when it was first published, A splendid
set piece of Betjeman reading Joan hunter Dunn to an audience
of stone faced Turks. Comment by MA;
Vintage verse all right. But will it travel?
A oneliner worthy of Billy Wilder.

got myself a copy a while ago. verry interesting read!

Its a shame that the old Landy was felled by a holed radiator, what a way to go.

Rudolf, you're right, the scene of John Betjeman reading very, very English poetry to Turks and a smug subset of English consular people is probably the high point in the book. And the lovely, young, apparently unflappable Diana, who was only 20 years old for much of the: Michael's great affection (love, one would suppose) comes through strongly.