It has been brought to my attention, through intermediaries, that some senior members of the readership have come to feel that this weblog has become “all letterpress, all the time.” Sarcastic comments to this effect may have even been made.

While my initial reaction to hearing this was to mutter “well then, damn them all to hell,” and to install a 301 redirect to, say, TMZ.com, upon reflection I realize that there is some truth to this.

And so while I will resist suggestions to “go and set up a separate letterpress blog,” I will endeavour to inject more of the witty commentary about life’s foibles that you’ve come to expect here. And so, to that end, here are condensed version of the five posts I didn’t write this summer because I was too busy obsessing about Bodoni.

It was “Meet the Staff” night at Prince Street School last night (a wise re-naming from “Meet the Teacher,” as only 12 of the 40 people employed at the school are classroom teachers). Attendance was great: the gym was packed for the information session that started the night, and the halls were bustling for the classroom visits.

Truth be told, though, while we parents can, indeed, “meet the staff,” there’s not actually much opportunity for parent-teacher dialogue at this event: hard to discuss your child’s particular eccentricities while there are other parents and children milling about. It’s really more of an “open house” than a “parent-teacher conference.” Still a valuable exercise, though, if only because we parents get to meet each other, which makes morning drop-off and afternoon pick-up a more social time.

There remains a language barrier, however: two of the other fathers in Oliver’s class, for example, speak very little English, and so their back-and-forth with the teacher was limited to hello and good-bye and pointing out their homeland on a map; I hope to work with the Home and School to improve availability of translators for events like this to ensure that all parents have an equal opportunity to participate.

The musical Hairspray, now playing at the Confederation Centre of the Arts, seems to be on track for “rousing success” status. Certainly Catherine and Oliver enjoyed it when they attended the opening night performance.

While I understand something of the financial rationale for producing shows like this, it pains me to see the Centre’s playbill gravitating toward more “popular” fare as the years go on.

Not to suggest that the Centre should endeavour to product unpopular entertainment, but it’s getting increasingly difficult to see how shows like this help to fulfil the mandate of the Centre to be Canada’s National Memorial to the Fathers of Confederation.

When Prime Minister Lester B. Pearson spoke of “fostering of those things that enrich the mind and delight the heart, those intangible but precious things that give meaning to a society and help create from it a civilization and a culture” surely he wasn’t referring to shows like Hairspray, was he?

It’s not that Hairspray and its ilk are bad – they employ local musicians and artists and actors, they bring in dollars that support the Centre’s other activities, they bring people downtown into restaurants and bars – it’s just that it’s hard not to imagine what their presence on the calendar is replacing: if the Centre can mount a compelling musical about 1960s Baltimore, surely it can equally as well mount a compelling musical about, say, the Johns Hamilton Gray.

Here on the Island we’re now deep inside the calendar of events related to the Fall Flavours Festival and its season-long mothership PEI Flavours.

Both are laudable efforts – who can argue with tourism promotion that seeks to include the primary industries and encourages people to eat in restaurants and visit farms – but both efforts seem blind to an entire cross-section of the culinary landscape on PEI, the restaurants, many of them new in the last decade, clustered in Charlottetown, that broaden the palette of what “PEI flavours” can mean.

Within 5 minutes walk of where I write in downtown Charlottetown, for example, there are seven restaurants serving sushi, two restaurants serving Thai food, four Taiwanese tea rooms, a patisserie serving pan-European pastries, at least four places where I can get a very good shawarma sandwich.

While the food served in these restaurants is not “traditionally Prince Edward Island” – although it would be hard to argue this in the case of the shawarma, which has been a part of the Charlottetown culinary landscape for generations – it’s all food prepared by Islanders, much of it using the same local ingredients that are used in the restaurants that PEI Flavours does highlight.

It’s possible to spend an entirely satisfying week in Charlottetown without a lobster, potato or mussel touching your dinner plate, and that’s something that we should not only be proud of, but that we need to embrace, promote, and include in our collective definition of what “Island food” means.

Last year saw the introduction of a sound and light show projected on Province House every summer night. And last year’s incarnation of this show placed a significant dent in the quality of life in our Queens Square neighbourhood: you could sit in our living room during the show and it was as if there was a 4 foot speaker blaring the sound from the show into our house.

This was not only an annoyance, but also caused “getting Oliver to bed” issues for us, as the sound echoed right into the window of his bedroom and the back of our house.

After I failed to get any response to complaints about this problem from Tourism Charlottetown and the City, I brought my concerns to the attention of Parks Canada, which manages Province House and, I reasoned, must be the ultimate authority on the issue.

I don’t know how and through whose good graces, but I’m happy to report that this season the problem has been non-existent: despite that sounds, when you’re standing in front of Province House, to be a mighty and booming PA, by the time you walk over to 100 Prince Street it’s but a whisper, and so the issue has ceased to be an issue at all.

Longtime readers may recall the talk Working for Free that I presented at the reboot conference in Copenhagen in 2008. On of the “working for free” projects I talked about was the idea, first raised at a casual lunchtime conversation with Mark Leggott, new Librarian at the University of PEI, about digitizing the archive of The Guardian newspaper, a project represented in the talk like this: 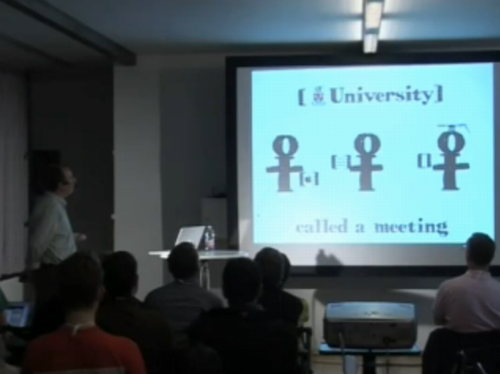 I’m happy to report that this effort is well-underway now, and you can see early results at IslandNewspapers.ca. There are only 137 issues of The Guardian online there now, and there’s obviously some usability and design work to be done to make the resource truly useful, but what’s there is enough to show the huge potential this project has to transform Island history research. Bravo to Mark and his staff for pushing forward on this.

Re: Sound & Light: Here’s something [rather amazing — once you forgive the quirky delivery] that could solve the problem if the right people get hold of it (je pense): http://www.ted.com/talks/woody…