As reported here back in March, Tommy and Lina Ko have taken leave of The Noodle House, the restaurant they founded up on University Avenue in Charlottetown that’s arguably always been the best place for Chinese food in the city.

Fortunately a new family has taken up where they left off, and last night Catherine and I had our virst visit to the restaurant’s new incarnation.

It’s hard to match the kind of customer-server bond that builds up over 13 years — Lina always knew what our “regular” was, and always brought chopsticks to Catherine, but not to me, and gave us an extra dish of hot sauce, and knew exactly how spicy we wanted our food. I’m pretty certain that she raised a bar that will never be reached.

That said, the service remains warm and efficient, and perhaps with time we’ll build up a relationship with the new folks too.

The menu remains the same, although a few dishes have been excised and they were out of simosas last night, which is always the highlight of any meal there (they’re still on the menu, so I hope it’s just temporary). There’s a new soy sauce/hot sauce management system at every table, the chopsticks are green now, but otherwise things seem to be much as we left them.

Without Lina to guide the chef as to our spice level preferences we ended up with food with about 50% more “kapow” than we were used to — who knew we could have been ordering “hot” intead of “medium spicy” all along? — and my Hot Szechuan Noodles with Tofu were truly excellent, as were Catherine’s Singapore Rice Noodles. The only disappointment of the night was the Satay Chicken, which was tough an essentially inedible; its the anchor of Catherine’s appetizer experience, so I hope this improves.

Perhaps the biggest change of all is the new hours: they’re open to 10:30 p.m. every night and they’re now open on Sundays too, which was never the case before. Oh, and there’s the big green sign on the front too: 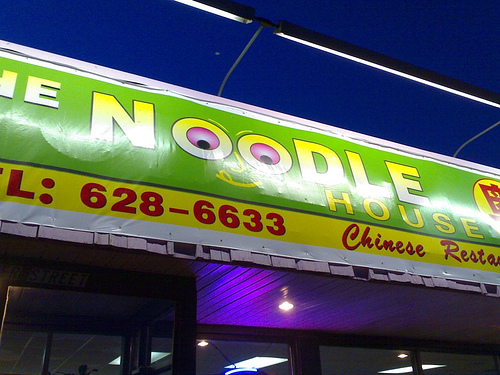 Funny your heat word is “kapow.” When I was Thailand the hottest style of dish by far was “krapow,” which is frying with diced red chiles and basil.

I wonder if it is intenional or not but they have spelt Restaurant incorrectly on their new big green signs. They managed to magically slip in an i into it.