I suppose we’ve always known that this day would eventually come, and, truth be told, I’m amazed it hasn’t come sooner, but we received an email from Netflix today telling us that our ability to stream Netflix to our television via our venerable Nintendo Wii will cease as of the end of January: 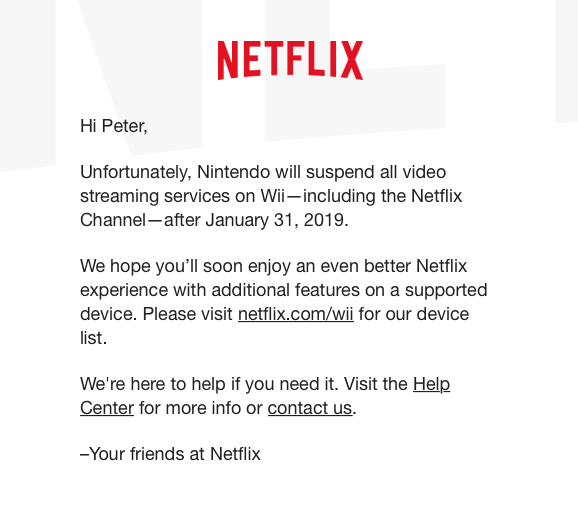 The only TV in our house is a 20 year old analog Sony Trinitron. It’s hooked up to our Wii using the old pre-HDMI analog way, VHS-tape-machine-style. And while it lacks all the bells and whistles of the modern television–apps, resolution, clarity, 16:9–it continues to serve us well, and I’ve no inclination to stop using it until some part of the setup stops working. I’m not sure that cessation of Netflix will be enough to get me to upgrade the television; indeed it might be all the stimulus I need to rid the house of television altogether.

I'd be interested in knowing what you decide to do. Life without Netflix seems like a horrible thing to me since I don't watch regular tv other than the news. I'm not one of those binge-watching people - I generally limit myself to an hour or two per day, but there are certainly times when the thought crosses my mind that I could be accomplishing so much more in my life if I wasn't staring at that screen.