I’m sure that shoplifting is quite dispiriting if you’re in the retail business. But it’s hard to imagine how the owner of the new bookstore in Charlottetown can expect customers to feel welcome when this is the first thing they see: 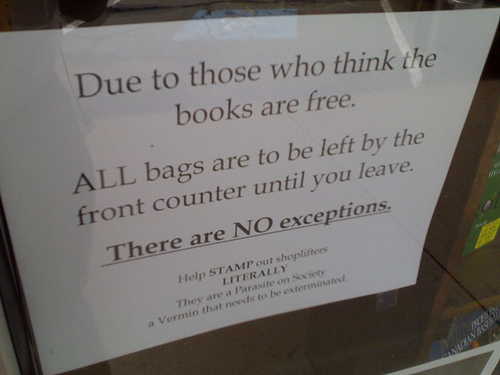 How about “Shoplifting is forcing us to ask everyone to leave their bags at the counter while shopping. Sorry for the incovenience. If you’d like to help us even more, please take the time to alert a store employee if you happen to see somebody pocket a book or other merchandise.”

When you asked them just how much “inventory shrinkage” they were having to deal with, what did they say?

I’m assuming Canada or any other western nation would be similar.

“The retailers who were surveyed account for 20% of European retail trade.
According to their replies, total shrinkage fell from 1.37% of turnover to 1.34%.
Overall they reckoned that 48% of their shrinkage was still being caused by customers.
And 16% was due to things like errors, process failures and pricing mistakes.”

No one knows how to quantify lost sales due to people being put off by obnoxiousness of one kind or another, so retailers may be biting off their noses to spite their faces. When they demand that a chip be implanted in my left buttock for security purposes, I will probably give up on shopping completely and start foraging for food. As it is, I am annoyed by invasive security protocols and avoid shopping in places that use them to excess.

Actually the survey covers Europe as well, and not just the UK as I said up there.

If one-third (or even a tenth of that) were being lost to theft the store would not last a week as books are generally on consignment from the publishers and what publisher would allow their property to be pilfered like that — especially through a new entrant to the trade. Marian’s number make more sense.

In this particular case, the guy sells used books.
And he has been in business before, so I’m thinking he may have had a problem so knows from whence he speaks.

I myself have less of a problem with his sign than I do with those detectors you have to pass through when leaving just about any store. In that case, the suspicion is not spoken, but implied just as clearly.