In anticipation of the roll-out of routes 2, 3, and 4 of the new Charlottetown public transit system, I’ve been working on geocoding the new routes, and I’ve been updating the demonstration page and the source code to match.

The route and stops for the new routes are now in place; I’ll add schedule information as the new routes come online. I’ve done some reformatting to accommodate the multiple routes (still playing with the colour scheme), and I’ve modified the pop-up boxes for each stop so that they display all of the scheduled stops, not just the next one. 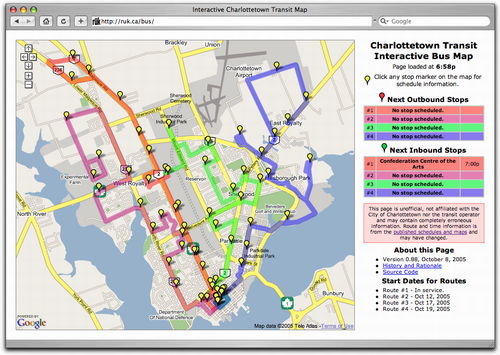 I’ve also updated the schedule based on some feedback from Trius Tours: Route #1 now stops at the Charlottetown Mall and Wal-mart on all runs.

Not that I’ll be riding any of these routes regularly, but when I click on your demos I don’t see the map and route I see in your posts. I only see the map pins, and this has always been so. I’m firefoxing and I’m not sure what my security preferences are, but I don’t notice trouble with most commercial sites.

Curious, Oliver: I’ve looked at the map in Firefox (Mac and Windows), Safari (Mac) and Internet Explorer (Windows) and it looks the same in each browser. As long as Javascript is enabled in the browser, you shouldn’t have any problems. Are others having the same problem?

I’m using Firefox and not having any problems seeing the route information. The problem may be that people are expecting the information to come up when they just move their cursor over the pins. You actually have to click on the pins to get the displays.

This is exciting stuff, man. I like it mucho.

For Copenhagen, though, I believe this Google-mapped stuff would be too taxing for the browser. Charlottetown’s bus routes are countable.

FYI I’m on WinXP and using Zone Anti-virus and I do have Java going at least some of the time, although I don’t understand well when and why it comes on.

I figured it out: With Firefox I’d opted to load only photos from “originating server” or something like that.

Ive been reading your blog quite a bit and am working now with transit, we are all thankful with the work you have done.
I am wondering if thebus.ca will have all the routes like this post has? Is there a way we could talk to get those up. They are really helpful and we would like to promote this feature to improve ridership.

Keep up the good work and blogging !

I have no plans to add the “missing” other routes back in: when the transit system made the jump from “simple and easy to understand” to “comprehensive, fine-tuned and much less easy to understand” I&#160ran into troubles trying to accurately reflect all of the different combinations of stops, routes and runs, and decided to scale back and just leave route #1, which the only one that I use myself, in place.

You’re free to check out the code that drives the map and look at adding these routes in yourself, but I suspect the most prudent thing to do would be to work with the Google Transit specification and feed your data to Google (and, optionally, build your own applications on top).