I’ve now been archiving Prince Edward Island electricity load and generation data for the last 7 years. Last night at supper time, the Island was consuming more electricity than it ever has before: we reached a peak daily load of 286.29 MW at 5:29 p.m. This tops the previous peak of 285.99 MW, reached January 17 of this year.

There must be some confluence of electricity-consuming behaviour on December 16, as previous yearly peaks were on this day of the year in both 2016 and 2019. Perhaps it’s a combination of a sudden plunge of temperatures (and maybe an over-compensation by Islanders, turning up the thermostat in disbelief that winter is happening yet again), combined with holiday lights, and Christmas baking?

Here’s a chart showing the peak daily load from January 1, 2013 to yesterday (and here’s the CSV file of the data used to generate it): 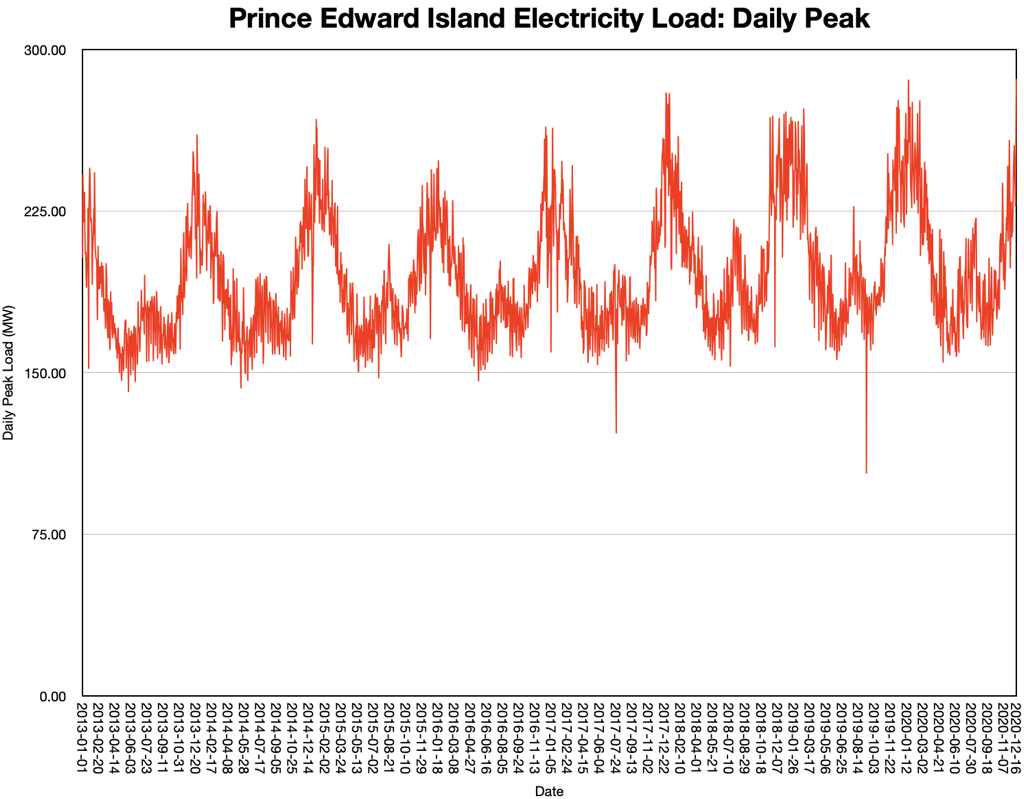 And if you want to keep your finger on the pulse of electricity load and generation of the Island, pei.consuming.ca is a compact, portable way of doing so.

I would imagine that the influx of construction activity has brought a lot of new buildings requiring electricity onboard (I can count I think 24 single-family homes and two large apartment buildings within 2km of my house in Cornwall alone since last winter), and with it (and retrofit programs) more heat pumps using electricity where oil may have been used previously.

Would be interesting to see Maritime Electric provide more robust data - Hydro Ottawa, for example, has an entire open data portal that has been leveraged to use behavioural nudges to get customers to reduce their energy consumption - like telling you you're worse than your neighbours at it. From what I can see, there's not much that ME provides us to look at patterns.

I noticed the peak on the 16th as well. I am wondering if the wind energy tagged as 'local' (70Mw at the time of the peak) is subtracted from the load before Maritime Electric's peak yearly draw is calculated.