For as long as Oliver’s been able to walk, a trip to Halifax has meant at trip to the Discovery Centre. In recent years these trips have become less eagerly embraced as the original location on Barrington Street fell into gradual disrepair pending the development of its replacement. We made our last trip to the Barrington location last March Break, and it was indeed the nadir: a tired old collection of rough-around-the-edges exhibits in a space that had seen no upkeep in a long while.

What a difference a year makes: the new location, sharing Nova Scotia Power’s building on Lower Water Street, is as different from the old as you can possibly imagine: it’s a fresh, modern take on the science museum, and over the last two days we’ve spent 8 hours there.

By far and away the highlight of the new facility is the Innovation Lab, which has two really great activities: an electricity-experimenting bench, filled with mix-and-match batteries, light bulbs, motors and switches, and a couple of benches outfitted with LEGO motors and all manner of gears and connectors. Both activities are pleasantly open-ended, and we spent several hours in the lab connecting and experimenting; a large part of our return for a second day today was the opportunity to go back and try things out again.

The lab also features a 3D printing station, but it’s frustratingly static, and behind a protective barrier: just a product demo, really (albeit of an Ultimaker, for which we feel a kind of familial pride). This would have been okay 5 years ago, but these days it would have been wiser to invest in 3D printing technology that would allow visitors to get their hands dirty; as it is the exhibit telegraphs “this is magic technology for special people only” and not “you will soon have more agency over the stuff of your daily life.”

Also in the lab are four PC laptops running Scratch and connected to Makey Makey devices; these seemed to go largely unused, perhaps because to really dig into what’s interesting about this setup takes more time than most are willing to invest during a visit (and, to be honest, it’s not a well that’s very deep to begin with; it may be that the Scratch emperor has no clothes, or at least fewer clothes than adults think).

Next door to the lab is the centre’s inaugural temporary exhibition, on the Science of Rock ‘n Roll. The electronic drum kits there are great fun, and we spent a lot of time at them; the audio mixing stations, which let you experiment with a multi-channel version of a David Bowie track are also quite engaging. They could lose a lot of the window dressing that surrounds, however: the flashing lights and the poster displays and cabinets of old audio gear would be fine if interpreting some strange new kind of music that nobody had ever heard of, but as it is they were simply taking up space (and making it harder to hear).

The second floor features areas devoted to electricity, health and flight. The electricity section provides little more than a brief overview of various generation methods, surrounding several lackluster touch screen-driven activities that failed to capture our attention. There’s so much missed opportunity here, given the centre’s proximity to a Nova Scotia Power facility; I hope they work to improve this in future. The flight section is pointless, and best skipped. The health area, although also a little too touch screen-heavy for our taste, has several compelling activities covering the senses, mental health, and nutrition, and we returned for a second day to re-sample some of them.

My favourite part of the new building is the musical staircase that leads from the second to third floors: as you walk up and down the stairs, sensors to the side detect your motion and play musical notes. It’s delightful. And it’s wonderful just to stand at the bottom and watch the surprise on the faces of unsuspecting visitors encountering it for the first time as they walk down the stairs.

There’s a tiny Dome Theatre off the main floor that’s running a selection of astronomy-related films and demonstrations. We attended one called “Our Place in Space” that was narrated by a live presenter and was quite well done. I appreciate that the centre opted not to go the IMAX route here (as many other science museums have), if only because it allows them to offer tickets for only $2 over regular admission.

The aspect of the new Discovery Centre I find most disquieting is the corporate branding: the “Nova Scotia Power Energy Gallery,” the “Medavie Health Foundation Gallery,” and so on. I don’t believe corporate sponsorship belongs in science education: this should be a completely public endeavour, free from corporate influence and branding. The Discovery Centre isn’t alone in this, alas: during our visit to the Ontario Science Centre several years ago, I was shocked by the degree to which the Centre, largely free of branding when I took a high school semester there 30 years ago, has fallen prey to the same (Pepsi is a “beverage partner” – how does that square?). I don’t envy those that took on the task of getting this new facility built: public money isn’t exactly overflowing these days, and there’s an almost-automatic default to private sponsorship, at least for “matching” dollars; perhaps it’s too late to hope that we can reverse this trend.

That aside, however, we were so happy to have an opportunity to spend a couple of days in the new Discovery Centre. We bought a membership for Oliver (at $50, it’s a bargain, especially when you factor that it includes free admission to ASTC member institutions), and, as they accept the Access2 card, I was admitted free as his companion, so we felt no pressure to cram in as much as we could in one day; going back for day two was a great chance to see things we’d missed and to revisit things we loved. We’ll be back. 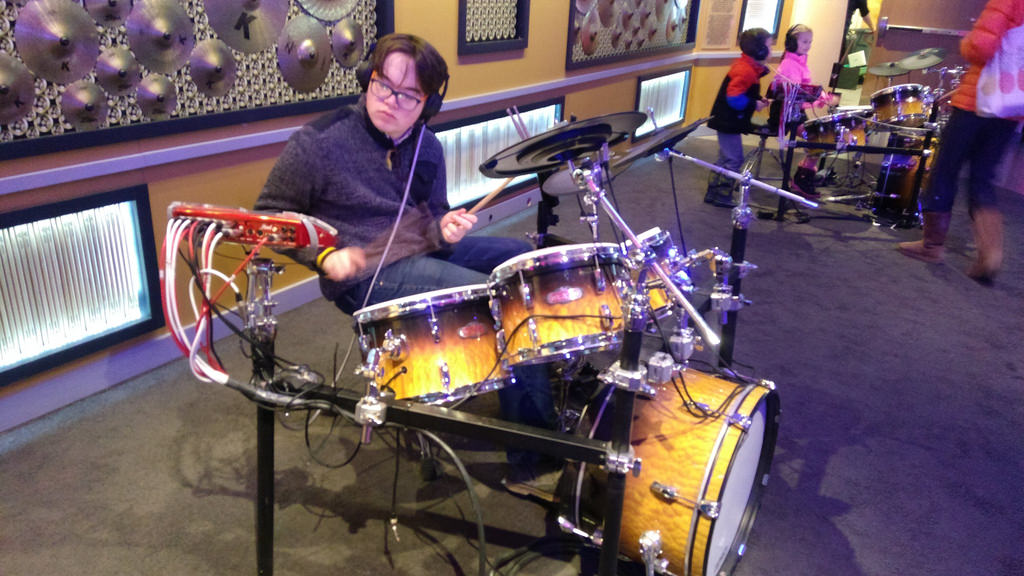 Cool photo of Oliver rocking it on the drums. "a kind of familial pride".....the connections we have created together....